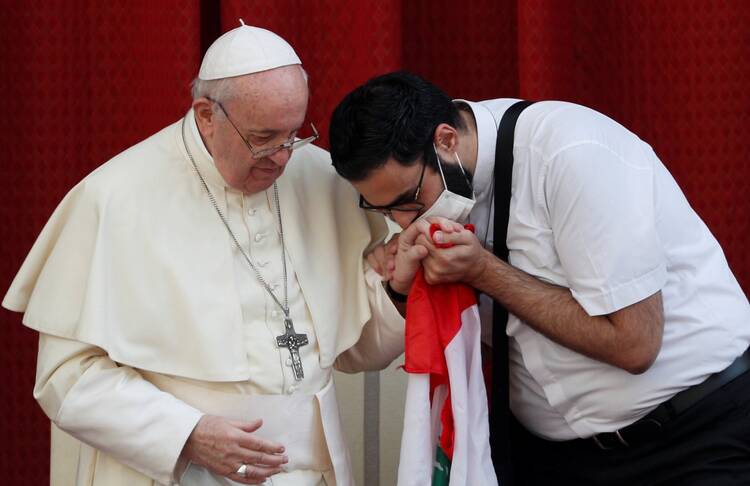 In his first public audience in six months, Pope Francis told his global audience that the Covid-19 pandemic “has highlighted our interdependence, [that] we are all linked to each other, for better or for worse.

“Solidarity today is the road to take towards a post-pandemic world,” the pope said, “toward the healing of our interpersonal and social sicknesses…. A solidarity guided by faith enables us to translate the love of God in our globalized culture, not by building towers or walls that divide and then crumble but by interweaving communities and sustaining processes of growth that are truly human and solid.”

Francis concluded: “We do not come out from a crisis the same as before. We either come out better or worse. We must choose. Solidarity is the way to come out better. Not with superficial changes or a coat of paint. No! Better!

“To come out of this crisis better than before,” he said, “we have to do so together, all of us, in solidarity.”

He also issued a heartfelt plea for aid for Lebanon, announcing a day of “prayer and fasting” on Sept. 4 for a nation suffering many crises. The pope is sending Vatican Secretary of State Cardinal Pietro Parolin to Beirut that day as an expression of his closeness to the Lebanese people.

Pope Francis: “We do not come out from a crisis the same as before. We either come out better or worse. We must choose. Solidarity is the way to come out better.”

Francis appeared radiant when he arrived for this Wednesday public audience, the first since Feb. 26, just before the pandemic forced the lockdown of Italy and the Vatican. He arrived early for an audience held in the 500-year-old Saint Damaso courtyard of the Vatican’s apostolic palace, not in St. Peter’s Square where they are typically convened.

Some 500 pilgrims and members of the Vatican’s press corps attended, all wearing masks, as were the Swiss guards, and, for the most part, respecting social distance. The audience members were divided into two sectors of the Renaissance courtyard, facing the platform where Francis would speak.

The Argentine pope arrived in his Ford Focus just before 9:30 a.m. The crowd cheered and applauded when they saw him. They shouted “Viva il Papa” again and again as he walked between the two sectors. Many stretched out their hands knowing he cherishes physical contact, but he refrained from touching them, in observance of the prevailing health norms, and instead exchanged verbal greetings.

At one stage, Francis spotted a priest, Georges Breidi, holding the flag of Lebanon. He went over to him, took the flag in his hands, kissed it and prayed. He invited the Maronite priest to join him at the end of the audience and stand at his side with the flag unfurled as he made his appeal for Lebanon and asked everyone to stand for a minute in silent prayer for that stricken nation.

The crowd applauded when Pope Francis made the sign of the cross and began the audience he had longed for over many months. He told them: “After many months we take up our audiences face to face, not screen to screen.... This is beautiful!”

Pope Francis: Solidarity is “something more than sporadic acts of generosity. It presumes the creation of a new mindset, which thinks in terms of community and the priority of life of all.”

Later, greeting German pilgrims, he confided, “I am very happy that once again it is possible to have a personal, face-to-face encounter in the general audiences. As social beings we need such immediacy; it does good to our souls.”

Addressing the pilgrims present, and the global audience following by livestream, Francis said that “as a human family we have our common origin in God; we dwell in a common home, the garden planet where God placed us; and we have a common destination in Christ. But, when we forget all this, our interdependence becomes dependence of some on others, increasing inequality and marginalization; it weakens the social fabric and the environment deteriorates.”

Then, referring to the pandemic that has already infected over 26 million people in 188 countries and caused the deaths of some 860,000, Francis declared, “Solidarity is now more necessary than ever.”

In this “interconnected world,” he said, “we experience what it means to live in the same ‘global village,’ but we do not always transform this interdependence into solidarity. Selfishness—individual, national and power-groups—and ideological rigidities instead sustain ‘structures of sin,’ as St. John Paul II said.”

He explained that “solidarity” refers to “something more than a few sporadic acts of generosity. It presumes the creation of a new mindset, which thinks in terms of community and the priority of life of all over the appropriation of goods by a few.”

It is not merely a question of “helping others,” he said. “It is a matter of justice.”

Francis said the biblical account of the Tower of Babel “describes what happens when we try to reach heaven—our destination—ignoring our bond with humanity, creation and the Creator. We build towers and skyscrapers, but we destroy community…. We want to be masters of the Earth, but we ruin biodiversity and ecological balance.”

He recalled that a medieval account of the “Babel syndrome” tells that “during the building of the tower, when a man fell and died, no one said anything. Instead, if a brick fell, everyone complained. Why? Because a brick was costly. It took time and work to produce bricks. A brick was worth more than a human life.”

Francis commented, “Unfortunately, something similar can happen nowadays, too. When shares fall in the financial markets, all the agencies report the news,” but “when thousands of people fall due to hunger, no one talks about it.”

At the start of today’s audience, the account of the first Pentecost in the Acts of the Apostles was read in seven different languages. Commenting on this, Francis said, “Pentecost is diametrically opposed to Babel.... The Spirit creates unity in diversity; He creates harmony. Others are not simply instruments, a mere ‘workforce,’ but rather participate fully in building up the community.” St. Francis of Assisi “knew this well, and inspired by the Holy Spirit, he gave all people, indeed all creatures, the name of brother or sister, even the wolf,” he said.

Francis recalled that “with Pentecost, God makes himself present and inspires the faith of the community united in diversity and in solidarity.” He explained that “a diversity in solidarity possesses ‘antibodies’ that ensure that the singularity of each person [does] not sicken with individualism, with selfishness.”

He added, “Diversity in solidarity also possesses antibodies that heal social structures and processes that have degenerated into systems of injustice and oppression.”

At the end of the audience, Francis greeted several people, among them a sick child and some newlywed couples, including two American journalists: John L. Allen and Elise Harris of Crux.