What will it take for police reform to work? The church’s abuse scandal offers some lessons. 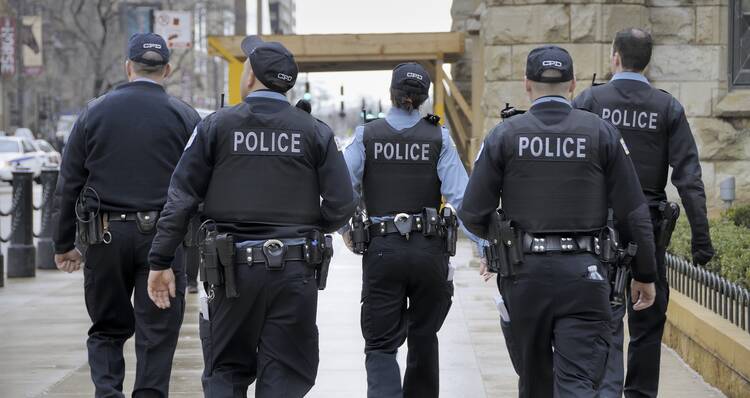 The nation was shocked this past spring by the video of a police officer in Minneapolis killing George Floyd by kneeling on his neck for several minutes. This accumulation of similar incidents of police misconduct has prompted calls for criminal justice reform and even “defunding” the police.

Shortly after the Floyd case, America’s John W. Miller identified “Six lessons for police reform from the Catholic Church.” Mr. Miller asked, “Is there anything to be gained by looking at the Catholic Church and how it has tried to better train and manage its priesthood, if not always successfully?”

The answer is a yes, but with some qualifications. The church has had some notable success in reducing the incidence of clerical misconduct. The Center for Applied Research in the Apostolate reports that the number of new allegations of sexual abuse against minors and vulnerable adults has dropped significantly since the 1970s. Much of this reduction can be attributed to the implementation of the Charter for the Protection of Children and Young People. Developed and approved by the members of the U.S. Conference of Catholic Bishops in 2002 at the height of the sexual abuse crisis, the “Dallas Charter” provides bishops and religious superiors with guidelines to prevent abuse, to respond to persons who have reported acts of abuse and to establish methods of accountability and transparency.

Strong laws and codes of conduct for law enforcement officers already exist in every state and at the federal level, obvtiating the need for a ‘Dallas Charter,’ writes Kathleen McChesney.

CARA’s data indicate that some of the key elements of the charter, including personnel screening, abuse-awareness education, the establishment of formal mechanisms to report abuse and the use of advisory lay review boards, were likely instrumental in reducing the incidence of abuse. Nonetheless, improvements in formation programs and oversight procedures, impacted by vocations, changing demographics and cultural influences, continue to challenge church leaders. And despite many revelations about past abuses in recent years, the church still has much to learn and many actions to take to demonstrate full accountability and transparency for the crimes and transgressions of some of its clerics.

With varying degrees of enthusiasm for implementing the Dallas Charter, all U.S. bishops nonetheless committed themselves to adhering to the principles of the document. The bishops’ charter-related actions (or, in some cases, inactions) have been verified through mandated annual audits conducted by outside firms. Inclusion of the external audit requirement in the charter is key to its effectiveness—and a requirement that is not commonly found in law enforcement policies. There are organizations however, such as the Commission on Accreditation for Law Enforcement Agencies (CALEA), that provide external reviews and accreditations based on current professional standards for law enforcement agencies that volunteer to participate in the process.

Law enforcement and other public-serving organizations, as Mr. Miller suggests, can learn much from the experiences and initiatives of the Catholic Church in addressing issues of abuse and misconduct. The desire to make sweeping changes in the delivery of police services is understandable, but the creation of a national “charter” for law enforcement to reduce police misconduct and a means to improve police-community relations is not a necessary or viable proposition—for good reasons.

Law enforcement and other public-serving organizations can learn much from the experiences and initiatives of the Catholic Church in addressing issues of abuse and misconduct.

Strong laws, standards, policies, statements of core values and codes of conduct for law enforcement officers already exist in every state and at the federal level, obviating the need for a new national charter and the reinvention of the wheel. Rather, as with the church, it is compliance with these statutes and regulations that results in a well-disciplined cadre of officers. Likewise, the lack of compliance and the absence of mechanisms to confirm compliance create the opportunities for misconduct and harm to the public.

The “Law Enforcement Code of Ethics,” often known simply as “The Code,” established by the International Association of Chiefs of Police in 1957, resembles the bishops’ charter in several ways, and is frequently used as an oath of office for law enforcement officers. The Code states, among other things, that an officer’s fundamental duties are to serve the community; safeguard lives and property; protect the peaceful against violence or disorder; and respect the constitutional rights of all to liberty, equality and justice. The Code also addresses the importance of acting impartially and using force only when necessary.

The I.A.C.P. and other professional law enforcement organizations regularly update model policies for police, including those specific to misconduct and anti-bias policing. The U.S. Department of Justice has provided state, local and tribal law enforcement entities with grants and technical and training assistance to assist them in developing better relations with citizens. These initiatives have been ongoing since 1994 and are offered through the department’s office of Community Oriented Policing Services.

Though there are laws that govern police conduct and numerous model standards and practices, there is no structure or mechanism to enforce a national charter for U.S. law enforcement.

Many states have specific requirements and standards for sworn police officers, but it is up to each individual agency, like each bishop and major superior, to ensure that its officers (or clerics) uphold those standards. If a law enforcement agency is alleged to exhibit systemic police misconduct, the Department of Justice’s Civil Rights Division is responsible for enforcement of the civil prohibition on the “pattern or practice” of policing that violates the Constitution or other federal laws. The D.O.J. investigates the allegations and, if substantiated, institutes a “reform agreement” with the agency that is designed to support effective policing and restore trust between the agency and the community. If necessary, the D.O.J. can initiate civil litigation and obtain “consent decrees” through the courts regarding specific police reforms and engage an independent monitor to oversee the agency’s remedial actions.

A new opportunity to improve policing in the United States has come about with the establishment of the national Presidential Commission on Law Enforcement and the Administration of Justice in 2019. The Commission has been mandated to conduct a “soup-to-nuts” review of criminal justice matters in the United States and will include identifying law enforcement challenges and solutions associated with mental illness, homelessness, substance abuse and other social factors that influence crime, as well as the recruitment, hiring and training of law enforcement officers. Just as important, the commission will explore and recommend ways to improve police-community relations and the better integration of education, employment and social services.

Though there are laws that govern police conduct and numerous model standards and practices, there is no structure or mechanism to enforce a national charter for U.S. law enforcement. The leaders of the 18,000 law enforcement agencies in this country, like the diocesan bishops and religious superiors, do not report to a single U.S. authority. While law enforcement leaders and officers regularly commit to upholding the standards of their profession—much like the U.S. bishops committed to the Dallas Charter nearly two decades ago—the lack of a national authority makes the concept of a universal police charter unfeasible. Thus, it is critical that law enforcement leaders, states’ attorneys general and the D.O.J. step in when serious and systemic police misconduct occurs and that citizens hold these public servants accountable for fulfilling their responsibilities in maintaining a safe and fair society.

Recognizing the existence of appropriate standards of conduct for police and the impracticality of a national charter to address police misconduct, there are two important concepts that still deserve more attention from police.

Law enforcement agencies do not need to develop a charter in the same way as the bishops did in Dallas. However, as many already do, their members need to recommit themselves to adhering to existing ethical standards.

First, the establishment of a national database of law enforcement officers who have been accused of or dismissed for serious misconduct is laudable, but would likely require federal legislation and a significant infrastructure to manage the data submitted. Nevertheless, this type of information is important for law enforcement leaders and citizens to know and helps to hold wrongdoers accountable. Such a database would be best handled by each state or agency, in conformance with privacy laws and any prevailing union contracts.

The establishment of a national database of clergy offenders by the Catholic Church was not supported for a variety of legal reasons. In recent years, however, many bishops and some major superiors have chosen to list publicly the names of known offenders to protect the faithful, to assist survivors in their healing and to hold those men accountable for their conduct. The earliest clergy offender databases, such as BishopAccountability.org or Pro Publica, were generated by journalists or survivor-support organizations. A constituency of persons who have been maliciously harmed by law enforcement officers may yet emerge to create similar lists of offenders’ names.

Second, agencies that do not currently use them should consider the use of well-constructed civilian oversight boards to address policies and issues of serious police misconduct. The Catholic Church’s use of lay review boards to address abuse allegations has been found to help survivors and guide church leaders in holding offenders accountable and reducing the risk of future abuse.

Law enforcement agencies do not need to develop a charter in the same way as the bishops did in Dallas. However, as many already do, their members need to recommit themselves to adhering to existing ethical standards. Law enforcement leaders need to improve selection and training programs to ensure personnel are capable of meeting those standards. Those leaders, like leaders in the Catholic Church, must provide constant oversight over their personnel and maximize the use of citizen/lay involvement in fulfilling their mission if they are to effectively protect all persons regardless of race, gender or creed.

Kathleen McChesney is a former executive director of the U.S.C.C.B.’s Office of Child and Youth Protection and a former F.B.I. executive. She is president of Kinsale Management Consulting, which works with dioceses and religious communities regarding clergy misconduct and high-risk behavior.