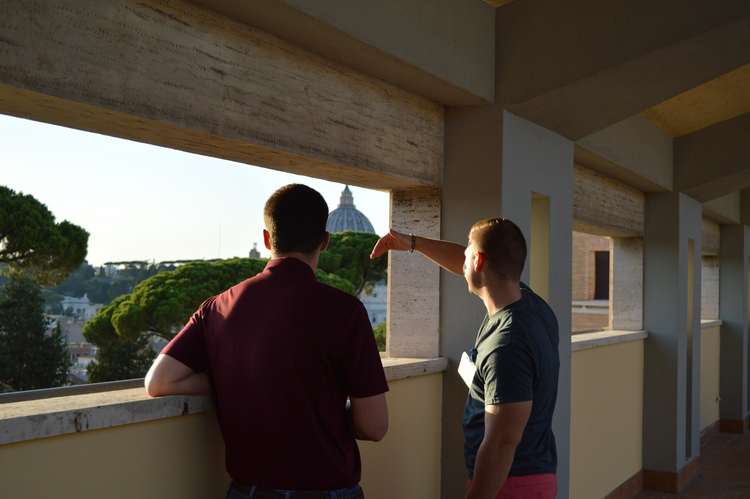 Second-year student Kelby Tingle from the Diocese of Shreveport, Louisiana, shows new student Matthew Pohlman from the Archdiocese of Omaha the view of the dome of St. Peter’s Basilica from the roof of Pontifical North American College in Rome. Students beginning their first year at the Rome seminary arrived Aug. 20, 2020, and began a two-week quarantine because of the COVID-19 pandemic. (CNS photo/PNAC Photo Service)

ROME (CNS) -- Close to 30 masked men got off a bus at the Pontifical North American College Aug. 20, beginning a new student orientation that kept as many traditions as possible in a 14-day quarantine.

The seminarians, from 23 U.S. dioceses, were tested for COVID-19 a few days before boarding their flights to Rome and were being monitored each day within the confines of the NAC campus on the Janiculum Hill overlooking the Vatican.

The quarantine, mandated by the Italian government, meant that the students were not able to join Pope Francis for the Angelus prayer on their first Sunday in Rome. It also meant the second-year students who volunteered for the orientation team could not take their charges down the hill and into the city in search of the best gelato.

But they did experience the traditional arrival "clap in," being welcomed with applause by the orientation team and staff as they processed into the college chapel.

"We are still awaiting the arrival of a few of our new students due to delays beyond our control in processing visas at some consulates in the U.S.," Father David A. Schunk, vice rector, said Aug. 28. "Though our brothers are not with us, we have been keeping in regular contact with them and are hoping the visas will be processed soon so they can arrive in the next week or two."

In addition, he said, "in the coming weeks, we are expecting the arrival of the rest of the seminary community, all of whom will be tested for COVID before departure and then upon arrival at the seminary. Then they will also be on campus for their two-week quarantine period."

The new students' courses at the pontifical universities in Rome begin in early October. Until then, they study Italian, pray, have in-house conferences and will begin to explore the city once their quarantine has ended.