The Editors: In our divided nation, Christians can be models of unity 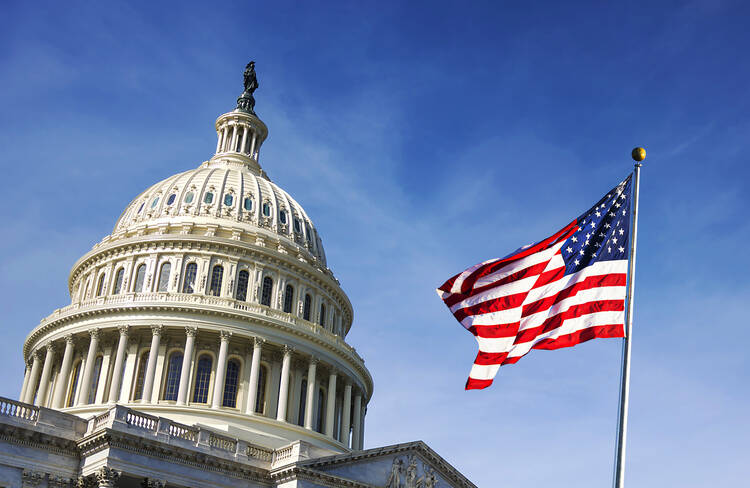 American flag waving with the Capitol Hill in the background (iStock).

The Statue of Freedom has stood atop the U.S. Capitol dome since 1863, the middle of the Civil War. The nation’s motto, “E Pluribus Unum” (“Out of Many, One”), is emblazoned on the base of the statue, which depicts liberty as a woman. The hope of a united nation amid America’s bloodiest war may have seemed naïve at the time.

“Our efforts must aim at restoring hope, righting wrongs, maintaining commitments and thus promoting the well-being of individuals and of peoples,” Pope Francis said in his address to Congress in 2015, standing beneath the Capitol dome. “We must move forward together, as one, in a renewed spirit of fraternity and solidarity, cooperating generously for the common good.”

Such hopes for unity may still seem naïve today. The world is coping with a global pandemic, and the United States is confronting its legacy of racial injustice. Under normal circumstances, facing foes like these could bring a nation together. But bitter partisanship has led us into a cold war within our borders, where candidates abandon civil discourse in pursuit of Election Day victories. In the heat of the campaign, the nation is in danger of forsaking its identity.

The United States was founded on the aspirational belief that all human beings are created equal and have a right to life, liberty and the pursuit of happiness. The founders believed that a government, empowered by the consent of the people, exists to protect and preserve the natural rights of its citizens. They envisioned those rights being defended by the equal enforcement of law, not privileging people in power but promoting the common good.

The framers also recognized sin and humanity’s fallen nature, realizing that government leaders would be tempted by the power entrusted to them. Their blueprint for stability and national unity amid political divisions separated the powers of the executive, legislative and judicial branches so they could each check each other. Yet for decades, partly because of impasses in Congress, power has been consolidated in the executive branch. This partisanship and inaction by the legislative branch, which the framers may have only dimly foreseen, has also led to greater reliance on the judiciary to resolve national disputes. Furthermore, the executive branch has weakened the judiciary by politicizing appointments.

The framers recognized sin and humanity’s fallen nature, realizing that government leaders would be tempted by the power entrusted to them.

Meanwhile, society’s trust in the media—the fourth estate—continues to erode. This lack of trust makes demagoguery possible. Citizens who fail to engage the “other side” are susceptible to deception. Influenced by technologies few of us fully understand, we can nestle into our curated feeds, brimming with opinions that affirm our own convictions, rather than engaging in meaningful discourse.

Society can progress together, but it will not happen without effort. Government leaders have set aside progress and compromise while continuously failing to ensure individual rights. The setting aside of the rule of law, which is meant to ensure equal rights, is but one example of this failure. Ongoing inequality among citizens represents another. The killing of George Floyd has awakened the national consciousness to systemic racism. Since the last presidential election, the #MeToo movement alerted Americans to widespread sexual harassment and sexual abuse. Furthermore, voter disenfranchisement and the unequal enforcement of the law, including among the political elite, reveal how far this nation is from equality. A representative democracy works only when all its citizens are treated equally before the law, regardless of race or gender or class.

This summer, members of both parties celebrated the legacy of the civil rights leader John Lewis, who had also served in Congress since 1987. “When historians pick up their pens to write the story of the 21st century, let them say that it was your generation who laid down the heavy burdens of hate at last and that peace finally triumphed over violence, aggression and war,” wrote Mr. Lewis in a New York Times column published after his death.

Some churches and pastors were at the heart of the civil rights movement, but too many others did not do enough. The Catholic Church must reckon with its historical failures with respect to race. Yet today’s discord beckons the church to play a larger part in the process of national reconciliation. The church can be an instrument of reunion, bringing together the voices of individual citizens and ushering a Christian sense of unity into the public square.

The church can be an instrument of reunion, bringing together the voices of individual citizens and ushering a Christian sense of unity into the public square.

That Christian unity reflects Jesus’ prayer to the Father in St. John’s Gospel: “that they may be one as we are one.” Such unity comes not by denying persistent injustices but by engaging others as fellow human beings. Each person is an individual created in the image and likeness of God. But like the community of the Blessed Trinity, individuals are born into communities. Self-righteousness and performative acts of censure, including attempts to destroy reputations over an ill-chosen remark or tweet, make civil discourse impossible.

This nation has never been uniform in culture, race or ideology. But it progressed, oftentimes slowly, to address injustice, defend individual rights and promote the common good. Citizens cannot let what they are fighting against prevent them from seeing their shared goal. Our political way of life cannot be simply about persuading enough people to vote for a certain party; rather, citizens must be willing to engage in discourse so that the right idea—the one that best serves the people—wins out. This requires honest, civil dialogue, compromise, conviction and openness to being wrong. The common good of the nation must be placed above ideological priorities.

The Editors: The U.S. mail offers a safe, simple way to vote in a pandemic
The Editors

Ultimately, in a representative democracy such as ours, citizens are the last defense against government corruption. Self-governance requires citizens to be engaged and to set aside partisan allegiances for the good of the nation. The Christian faithful can serve as models, as this form of government requires its citizens to have courage, to be vigilant against oppression and to be prudent.

“We are not enemies, but friends,” Abraham Lincoln, the first president to win on an anti-slavery platform, said in his first inaugural address. “Though passion may have strained, it must not break our bonds of affection. The mystic chords of memory will swell when again touched, as surely they will be, by the better angels of our nature.”

Being united amid disagreements is essential to being Americans. May the United States set aside cynicism and strive toward this ideal. As the nation enters the final weeks leading to Election Day, may citizens not only choose the best leader in political races but also unify to address prevailing wrongs through civil discourse. We are certainly many. May we also be one.