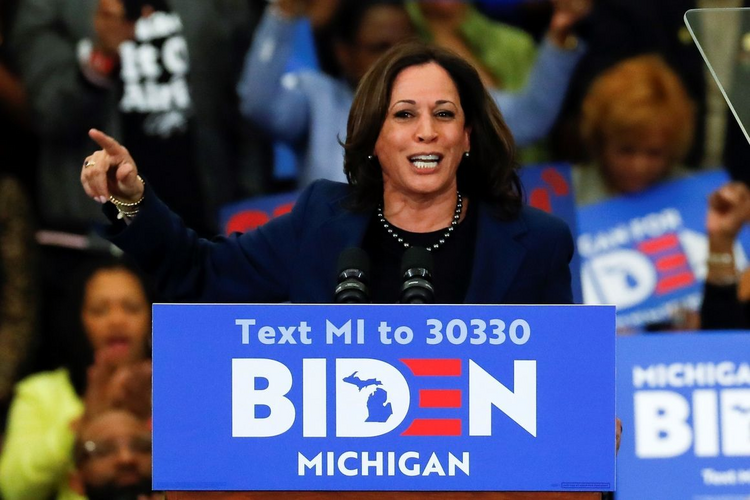 (RNS) — Kamala Harris filled two criteria that Joe Biden wanted in a running mate: She is a woman and she is Black, two critical Democratic constituencies ahead of the November elections.

But Harris, the 55-year-old junior senator from California, has other advantages in the 2020 presidential race. She embodies the future of American religion: In a time of expanding religious pluralism, the country’s younger generation, many of them children and grandchildren of immigrants, will recognize in Harris a kind of multifaith and spiritual belonging unfamiliar to the mostly white Christian majority of past decades.

Harris, who was born in Oakland, California, to a Jamaican immigrant father — Donald Harris — and an Indian immigrant mother — Shyamala Gopalan — is both Black and South Asian. She grew up in a home that accommodated both Christian and Hindu religious practices.

As an adult, she married Douglas Emhoff, a Jewish, Brooklyn-born lawyer.

“There are a lot more young Americans who, identity-wise, are like Kamala Harris — mixed race, with a background of lots of different cultural, ethnic and religious experiences,” said Eboo Patel, founder and president of the Interfaith Youth Core. “That’s just a demographic fact.”

That’s particularly true for members of the Democratic Party and its electoral coalition, which skews younger and is more racially and ethnically diverse than the Republican Party’s base. It also affiliates less with traditional religion.

To be sure, Biden and Harris identify as Christian — he a Catholic, she a Black Baptist. But the ticket that will formally be nominated in Milwaukee next week as the Democratic Party’s choice for president and vice president represents a stark contrast to President Donald Trump and Vice President Mike Pence, who are both white, Protestant and male.

Harris, who is a member of Third Baptist Church of San Francisco, brings an ethnically and racially diverse version of Christianity to the ticket. She also has an appreciation of the contributions of many non-Christians, who happen to be her family members.

A Pew Research report last year found the United States is steadily becoming less Christian and the number of people with no religion is rising. Christianity still leads — two-thirds (65%) of Americans describe themselves as Christians — but white Christians are a minority, at about 42% of the country, said Robert P. Jones, CEO and founder of Public Religion Research Institute.

Looking at the religious affiliation of Americans by age, the contrast is even starker, said Jones.

The Republican Party has seen demographic changes in its ranks as well. Nikki Haley, who served as ambassador to the United Nations under Trump from 2017 to 2018, was born into a Sikh family and converted to Christianity shortly after marrying a Methodist. (Their wedding ceremony combined both Sikh and Christian elements.)

Likewise, Bobby Jindal, a former governor of Louisiana, was born into a Hindu family and converted to Catholicism in high school.

Such religious switching, as well as multiple religious belonging, is part of America’s dynamic religious landscape and is only likely to grow even more commonplace.

“I remember as a pastor having one of my most active families be one where one of the spouses had grown up in a traditional Baptist household in the South, and the other was Jewish and had grown up in a Jewish household in the Northeast,” said Derrick Harkins, national director of interfaith outreach at the Democratic National Committee. “They were one of my most active and engaged families.”

University chaplains see this all the time, said Rachel A. Heath, a Ph.D. student at Vanderbilt University who is writing her dissertation on Christian responses to multiple religious belonging and who served as a chaplain in the past.

In such an atmosphere, Harris’ eclectic religious background is as likely to be an asset as a distraction in the run-up to the Nov. 3 election.

“I don’t think her religious biography will be a negative in the campaign,” said John C. Green, director emeritus of the Ray C. Bliss Institute for Applied Politics at the University of Akron. “There may be people who complain. But I don’t see those complaints having much resonance because she represents a trend that’s an increasingly common pattern.”

Show Comments ()
Join the conversation: Login or create an account
Before you can comment, you need to update your profile to include your first and last name, as required in our comments policy. Then reload this page and you'll be set up for commenting. Update your profile
Advertisement
More: US Politics / Women's Issues / Religious Life