Your taxes and abortion: what is the Hyde Amendment and why does it matter? 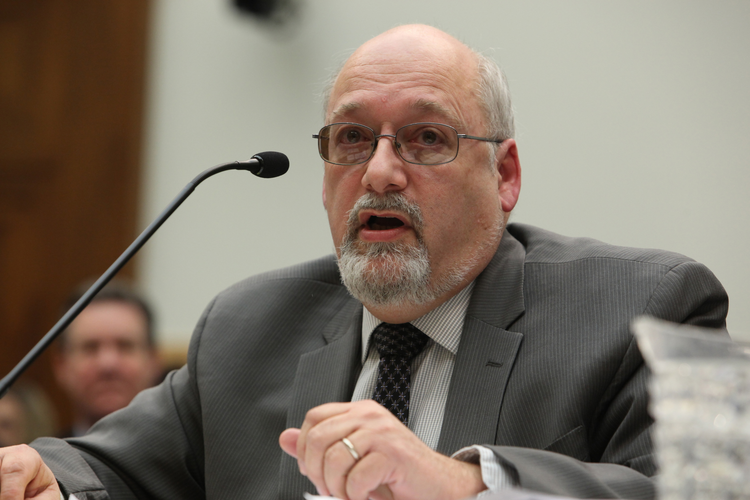 Richard M. Doerflinger, associate director of the U.S. bishops' Secretariat of Pro-Life Activities, testifies Jan. 9, 2014, in favor of a House bill that would make the Hyde amendment a permanent part of the law.

House Democrats, anticipating that any effort to end the Hyde Amendment would die in the Republican-controlled Senate, will not push to overturn the decades-old budget rule that prohibits Medicaid from funding abortion, Politico reported on July 6, 2020. The Hyde Amendment has become a flash point in the debate over abortion in recent years, with abortion rights advocates pushing for it to be overturned while pro-life activists say it is a small but important compromise that recognizes the spilt in public opinion on abortion. According to Politico, House Democrats want to wait to address the issue until after the November elections, with the hope that their party takes control of the White House and the Senate. The issue could be debated in the presidential election, as President Trump has said he supports the Hyde Amendment and his likely opponent, former Vice President Joe Biden, opposes it. Below is an explainer about the history of the Hyde Amendment.

In a video-captured conversation that came to light on June 5, the former vice president and 2020 presidential candidate Joe Biden appeared to suggest he backed the repeal of the Hyde Amendment. His campaign quickly clarified that Mr. Biden thought the activist was asking about the so-called Mexico City rule, which prohibits U.S. foreign aid to non-American organizations that provide abortion services.

The campaign said Mr. Biden supports ending the Mexico City rule but backs the Hyde Amendment—for now. That would change, it said, “if avenues for women to access their protected rights under Roe v. Wade are closed.”

A Biden campaign spokesperson explained the former vice president specifically “would be open to repealing” Hyde if abortion access is further threatened by laws—like those recently passed in Georgia and Alabama—that deeply restrict access to abortion.

The hedging prompted an intraparty outcry, with advocates for abortion rights deploring Mr. Biden’s position and top Democrats reaffirming their commitment to abortion rights and ending Hyde. The pushback marked the first significant instance in which virtually the entire crowded 2020 field united to critique Mr. Biden, who has emerged as an early Democratic front-runner.

The news raised eyebrows among some groups of Democrats, including those who consider themselves pro-life and those who while they support access to legal abortion, nonetheless retain some moral qualms about the procedure.

RELATED: Room on the Platform for Pro-Life Democrats?

The issue prompted some spirited debate among Democrats, with editorials appearing in the Los Angeles Times and USA Today.

In her run for president, Hillary Clinton said that she supports repealing the Hyde Amendment as part of her broader goal of expanding access to abortion.

But her running mate, Senator Tim Kaine of Virginia, had a more complicated position on the issue. He has said many times that as a Catholic he is personally opposed to abortion, and as governor of Virginia, he signed some bills supported by pro-life activists.

His voting record in the U.S. Senate, however, has earned him perfect scores from Planned Parenthood and NARAL Pro-Choice America. Then again, Kaine said as recently as July 6 that he supports the Hyde Amendment.

So what is the Hyde Amendment?

The Supreme Court legalized abortion in 1973, which meant that Medicaid, the federal insurance program for low-income Americans, covered the procedure, to the tune of about 300,000 abortions per year.

Three years later, Republican Congressman Henry Hyde of Illinois proposed an amendment to a federal spending bill that prohibited federal money from funding abortion. His proposal meant that Medicaid would no longer pay for the procedure, except in cases where the life of the mother was at risk.

Social justice includes being pro-life: Why Tim Kaine should defend the Hyde Amendment
The Editors

Hyde’s amendment passed, and after some legal wrangling, it was implemented in 1977. The number of abortions covered by Medicaid dropped to a few thousand per year.

The Supreme Court in 1980 decided in a 5-4 ruling that the Hyde Amendment was constitutional. Since then, it has been included on every federal spending bill, its language varying slightly from year to year, expanding to allow Medicaid to cover abortion if the mother’s life is in danger or if the pregnancy is the result of rape or incest.

States also took action on the issue. More than a dozen authorize state money to fund abortions for women whose Medicaid will not cover the procedure, while others have their own bans on the use of taxpayer funds.

For much of its 40-year history, the Hyde Amendment was considered a fairly non-controversial compromise. But in recent years, abortion rights activists have put pressure on lawmakers to oppose renewing the amendment, saying it amounted to an unfair burden on poor women. At the same time, pro-life activists on both sides of the aisle have sought to codify the Hyde Amendment into law.

@MikeOLoughlin
Show Comments (
7
)
Comments are automatically closed two weeks after an article's initial publication. See our comments policy for more.
William Rydberg
4 years 9 months ago
Count yourselves lucky. In Canada there are no restrictions on Abortion Recently an upper middle class couple found out they were pregnant with twins. They only wanted one child. The shopped physicians in Toronto finally arranging the abortion at one of the preeminent hospitals in Toronto. The "procedure" was undertaken. We have Medicare (Universal) here in Canada. This was reported in our National Newspaper. The political class here in Canada had nothing to say. I often wonder what the survivor will think knowing he was chosen? Pray for Canada and be glad you can enter in to a discussion. in Christ, Pray for Canada
Crystal Watson
4 years 9 months ago
It's past time that the Hyde Amendment should end. It discriminates against poor women and makes their abortions more risky. At the end of the day, it's a way to punish women. As an article in Slates mentions ... http://www.slate.com/blogs/xx_factor/2016/01/11/why_hillary_clinton_s_call_out_of_the_hyde_amendment_is_so_important.html ... "Studies show that poor women take up to three weeks longer than other women to secure an abortion, in part because she needs time to come up with the money. But the further along the fetus, the more expensive her abortion will be and the more likely she is to experience health complications." And there was an article about this in The Atlantic this week that mentions that the US is one of the few countries in the world that doesn't fund this for the poor ... http://www.theatlantic.com/health/archive/2016/07/america-a-global-outlier-on-abortion/492551/
L J
4 years 9 months ago
You are consistent in your attack on life Crystal and killing unborn children all in the name of inconvenience and selfishness.. Why can you not defend the sanctity of life but feel it necessary to populate these pages with words from the culture of death? please explain your disdain for the sanctity of life. Or are you here as a non-Catholic troll seeking to agitate? Ive picketed many abortion centers for decades and know the work of the enemy all too well
Crystal Watson
4 years 9 months ago
Yes, I'm a Catholic. Keep in mind, a majority of Catholics are *for* abortion being legal, so my beliefs are not odd for a Catholic. I spent a summer in college volunteering at a Planned Parenthood and i think they do good work helping women, especially poor women. I do care about life, the lives of women and girls.
Gail Sockwell-Thompson
4 years 9 months ago
As a Catholic school student during the era of Roe v Wade, I often wondered why the Catholic Church was not more adamant on women's issues. Surely if women had more options, and were not the sole bearers of the pain of unwanted pregnancies, perhaps there would be fewer abortions. It seemed so intuitive. I spoke to so many of my peers who had abortions who said they wanted a good life, and being responsible for a child with no assistance was too heavy a burden. Like the boy, they just wanted the ability to walk away. Yet at every opportunity, the church offered excuse after excuse as to why women should settle on being the servants of all. I knew that wasn't for me, so I dedicated all of my efforts to women's equality. As we often say, no justice, no peace. Know justice, Know peace. Work to level the playing field, then let's have a conversation. We as a country must stop expecting those suffering from inequality to continually take the first steps toward resolving problematic issues.
alan macdonald
4 years 9 months ago
Ms Watson, your humanity stops at babies. That is not Roman Catholic orthodoxy. We are to love each other from the moment of conception to a natural death.
Crystal Watson
4 years 9 months ago
An embryo is not a baby. An early fetus is not a baby. I'm not aware of any scripture that tells us to love embryos and fetuses more than living women and girls.