The Editors on Hiroshima: The U.S. should repent of these crimes against God and man 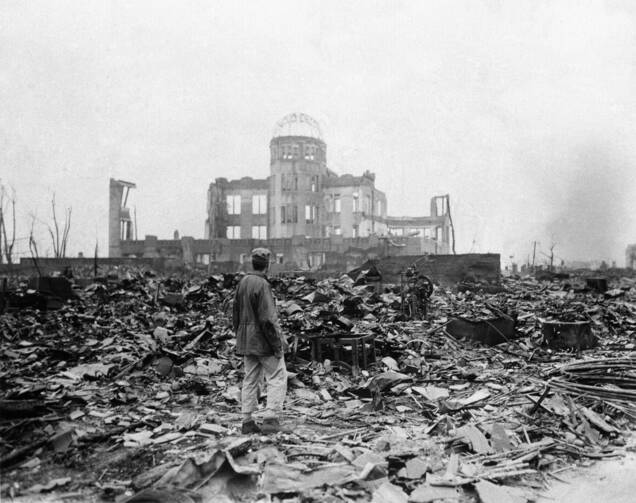 In this Sept. 8, 1945, file photo, an allied correspondent stands in a sea of rubble before the shell of a building that once was a movie theater in Hiroshima, western Japan, a month after the first atomic bomb ever used in warfare was dropped by the U.S. to hasten Japan's surrender. (AP Photo/Stanley Troutman, Pool, File)

Today we mark 75 years since the United States became the first nation in history to attack an enemy with an atomic bomb, leveling the city of Hiroshima and killing 140,000 people. Three days later, the United States dropped a second bomb on Nagasaki, killing 70,000. On Aug. 15, the Japanese surrendered. The Second World War was over, but a new era of Cold War tensions and nuclear proliferation had begun.

In the days after those fateful bombings and the decades that followed, the editors of America grappled with the morality of President Truman’s decision to approve the use of nuclear weapons, the application of just-war theory in the nuclear age and how the United States—the only country to have used the bomb—should commemorate this grim anniversary.

In an editorial appearing in the Aug. 18, 1945, issue of America, the editors imagined the nightmare unleashed by the first use of the atomic bomb:

[I]t is certainly not too fantastic to see the future world, some generations hence, not walking free in God’s sunshine and air, but burrowing deeper into buried cities. In place of cathedral spires and church towers reaching to the heavens, the most familiar architecture man knows may be the catacombs and warrens of his subterranean shelters.

The atomic bomb brings us face to face and inescapably to a realization that here is spelled out for us either the end of all wars or a nightmare future.

With the changes to the built environment, the editors predicted, would come even more consequential geopolitical and moral reckonings:

Whatever the Martian changes that may overtake our physical life as a result of this astounding discovery, in the moral sphere there can be no doubt that the atomic bomb brings us face to face and inescapably to a realization that here is spelled out for us either the end of all wars or a nightmare future. The secrets of the bomb, no matter how well guarded, no matter how determined America, Britain and Canada are that they be shared only by the “peace-loving” nations—those secrets will out. The bomb will be the common weapon of nations at some not-too-remote time. When that time comes, if war shall not have been rendered simply unthinkable, every nation in the world will but cower under the threat that any enemy to get in the first blow will have a head start in the race to annihilation.

The moral issues raised by the discovery and use of the atomic bomb are numerous and extremely grave—so grave, indeed, that moral theologians will hesitate to give a forthright decision as to whether or not its use as a weapon of war can be justified for any reason or on any grounds. For here the reasons which to some seemed to justify the use of ordinary bombs do not hold. The range of its destruction cannot be confined to anything that might be called an authentic military target. Its long-range consequences, moreover, are fraught with such frightful menace for all human existence on this planet, that a literally tremendous weight of responsibility rested upon those who decided that it should be used. They seem to be aware of their responsibility, and that they have in their hands a power that sooner or later will pass from their exclusive control and become common property. It is our earnest prayer that the evil which will come from the atomic bomb may not outweigh the good which our war leaders, rightly or wrongly, hoped to achieve by its use.

In 1995, 50 years after the nuclear attacks, the editors noted that “most people are willing to describe as ‘regrettable’ the destruction of Hiroshima” but they “are not ready to agree that the use of the atom bomb was morally unjustified—as evil in its way as Auschwitz.” That year, the Smithsonian’s planned exhibit on the atomic bombing of Japan was scrapped after veterans’ groups and members of Congress criticized “the concept of the exhibit in general and on the script in particular for interpreting the war in a way that was said to make excuses for Japan and to cast the United States in the role of a racist aggressor.”

For here the reasons which to some seemed to justify the use of ordinary bombs do not hold.

In response, the editors noted that “it was clear from the protests that even if that script had been irreproachably sober, no exhibit would have been tolerated by the critics if it had even discreetly suggested that the morality of using the bomb should be examined.”

The editors urged their fellow citizens to reconsider the use of nuclear weapons in light of the principles of just-war theory:

Many who defend the bombing of Hiroshima either have never heard of this just-war theory or dismiss it as outdated. They argue on purely pragmatic grounds that it was quite all right to use the atomic bomb because it brought the war in the Pacific more quickly to a close. In other words, the end justified the means.

Most people, however, will at least intuitively ratify two of the criteria that the just-war theory spells out. A war is unjust if it does not respect the immunity of non-combatants and if it does not limit the use of force by the strict demands of defense. One does not, so to say, blow an aggressor's head off if he can be halted by a shot in the foot.

But is it not revisionism, a form of second-guessing at the distance of a half-century, to conclude that the bombings of Hiroshima and Nagasaki were immoral because they failed to meet those two criteria? Indeed it is, and revisions of this sort are indispensable for moral growth. Societies, like individuals, purify themselves by reassessing their past in the light of more mature understanding.

Societies, like individuals, purify themselves by reassessing their past in the light of more mature understanding.

Eleven years later, the country again grappled with the questions of memory and repentance in the leadup to President Obama’s historic visit to Hiroshima on May 27, 2016. Before the trip,  critics called out the president for seeming to “apologize” for America. The editors defended the president’s trip and called for a robust national reckoning with our past use and current possession of nuclear weapons:

Rather than a shutdown of the Smithsonian debate, a better outcome would have been an exhibit that discussed the arguments for and against the American show of force in Hiroshima and Nagasaki. Similarly, an open debate is preferable to shouting down President Obama’s visit to Hiroshima. Americans do not need to be sheltered from any material that questions or complicates President Harry Truman’s decision to use nuclear weapons. We should not be afraid of our own history.

The horrors of Hiroshima and Nagasaki, and the morality of our actions there, are appropriate topics in any discussion of nuclear proliferation—as are plans by the U.S. military to spend up to $1 trillion in the next three decades “modernizing” its nuclear arsenal. As citizens of the world, we should not be inhibited by national pride or the belief that American exceptionalism justifies any action we undertake. In the aftermath of World War II, the United States directed the rebuilding of defeated nations, acting in the best interests of our common humanity rather than seeking vengeance. Our willingness to confront the morality of using nuclear weapons continues that tradition and strengthens our national character.

75 years after Hiroshima, how can we work toward Pope Francis’ vision of a nuclear-free world?
Drew Christiansen

On this 75th anniversary, the number of survivors of Hiroshima and Nagasaki is small and shrinking. Soon no living person will remember the horror of those August days, and it will fall on the rest of us, political leaders and citizens alike, to give an honest account of the bombing and its aftermath and to repent for the suffering and destruction wrought in the name of our country. As the editors wrote in 2008:

To exercise moral leadership in our world, the United States should repent of these crimes “against God and man.” This begins with an acknowledgment of wrongdoing and an apology to the Japanese people for targeting civilians with the intention of driving Japanese leaders “into submission.” Pope John Paul II modeled this type of moral leadership, frequently confessing historical sins of the church and asking for forgiveness. His actions are worthy of emulation.