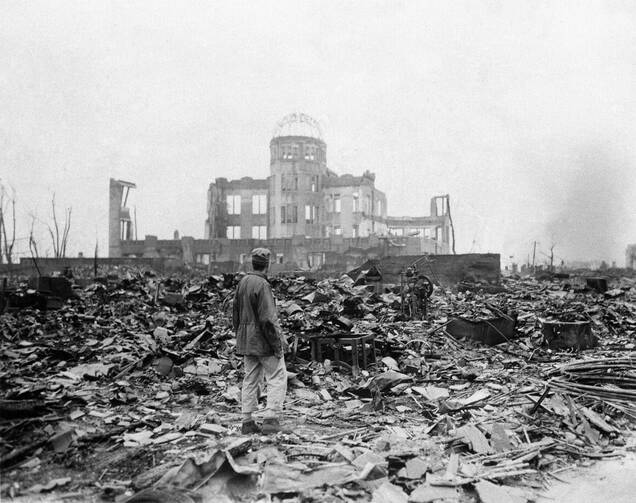 Barack Obama plans to visit Hiroshima, Japan, on Friday, May 27, making him the first sitting president to visit the city where the United States dropped an atomic bomb in August 1945 and killed more than 100,000 people, most of them civilians. The idea has not been well received by critics who have long charged the president with insufficient patriotism. “President Obama has an unfortunate record of seeking opportunities to apologize for things America did before he became president,” writes the historian Arthur L. Herman in National Review. “[His] very appearance at Hiroshima bears the hallmark of an apology, regardless of the words he utters.”

Both the U.S. and Japanese governments insist that contriteness is not the point of the visit. Instead, President Obama will argue for nuclear disarmament and nonproliferation treaties, with Hiroshima symbolizing what can happen if we fail to control such weapons.

Taking offense at a president speaking at Hiroshima, regardless of what he says there, is a form of political correctness, an attempt to shut down debate so as not to raise uncomfortable questions. But treating the bombings of Hiroshima and Nagasaki, and the combined 210,000 deaths, as a taboo subject is not simple patriotism. It also protects the sensibilities of proponents of American exceptionalism—the idea that any action taken by the United States is beyond reproach or debate. It challenges the “America first” simplicity of Donald Trump, and what The Atlantic’s Peter Beinart describes as a tradition, dating back to President Andrew Jackson, that depicts “America as a country that just wants to be left alone” and is thus justified in responding to any challenge with unlimited force. Mr. Beinart quotes the theologian Reinhold Niebuhr’s warning against the “pride and self-righteousness of powerful nations” and the danger that the United States’ presumption of its own eternal innocence could dissolve any moral constraints on its behavior.

The unease over President Obama’s visit recalls a 1995 controversy over a planned exhibit at the Smithsonian Institution on Hiroshima and Nagasaki that members of Congress said was “overly solicitous of Japan,” as The New York Times then reported. “Critics charged that it emphasized the horror and suffering of Japanese civilians at the hands of American aggression,” reported The Los Angeles Times.

Text materials that were to accompany the exhibit included an estimate, solicited from a Stanford University historian, that dropping the bombs saved 63,000 American lives that would have been lost in a military invasion of Japan. The American Legion and other veterans’ groups said that a previous estimate of 229,000 was correct, and they demanded that the exhibit be cancelled. Instead, the Smithsonian mounted a much smaller exhibit that included the fuselage of the Enola Gay B-29 used to drop the bomb on Hiroshima but avoided any mention of the debate over possible military casualties.

There will never be a definitive answer on how many lives were saved by history’s first use of nuclear weapons. Some historians argue that Japan, alarmed by the entry of the Soviet Union into the Pacific war, was on the brink of surrender without the need for either nuclear weapons or a full-scale invasion. But Japan’s refusal to surrender until nine days after the Hiroshima bombing (and six days after the Nagasaki bombing) suggest that it was contemplating a fight to the very end. The losses in the battle for the small island of Okinawa, which lasted almost three months and resulted in more than 82,000 deaths among the Japanese and the Allied forces, provide some indication of what an invasion might have cost.

Still, shortly after the leveling of Hiroshima, the editors of America wrote that “moral theologians will hesitate to give a forthright decision” on whether the use of nuclear weapons can ever be justified, but “the reasons which to some seemed to justify the use of ordinary bombs do not hold” for atomic weapons. The indiscriminate loss of life from atomic weapons and the long-term effects of radiation meant that the rules of so-called conventional warfare no longer applied.

Rather than a shutdown of the Smithsonian debate, a better outcome would have been an exhibit that discussed the arguments for and against the American show of force in Hiroshima and Nagasaki. Similarly, an open debate is preferable to shouting down President Obama’s visit to Hiroshima. Americans do not need to be sheltered from any material that questions or complicates President Harry Truman’s decision to use nuclear weapons. We should not be afraid of our own history.

The horrors of Hiroshima and Nagasaki, and the morality of our actions there, are appropriate topics in any discussion of nuclear proliferation—as are plans by the U.S. military to spend up to $1 trillion in the next three decades “modernizing” its nuclear arsenal. As citizens of the world, we should not be inhibited by national pride or the belief that American exceptionalism justifies any action we undertake. In the aftermath of World War II, the United States directed the rebuilding of defeated nations, acting in the best interests of our common humanity rather than seeking vengeance. Our willingness to confront the morality of using nuclear weapons continues that tradition and strengthens our national character. President Obama should be commended for promoting honest discussion about the most destructive weapon ever devised by mankind.

The Editors
Show Comments (
3
)
Comments are automatically closed two weeks after an article's initial publication. See our comments policy for more.
6 years 1 month ago
For seven or eight years, I have been participating in an Interfaith Conference on Preservation of Article 9, the clause in Japan's constitution that renounces the use of military force. The President's visit is an important gesture toward strengthening the commitment and encouraging the efforts of all those working for peace in Northeast Asia and around the world.
Lawrence Lyons
6 years ago
We confront and try correct our problems publicly, unlike the Japanese, who consider such introspection to be loss of face and weakness. Until they own up to their actions as both the proximate and immediate cause of the war in the Pacific; and the fact that it was 17 times more dangerous to be POW of the Japanese than it was to be engaged in combat with them, they are living a damnable lie, and I will keep my tears for the POWs who died building that railroad through Burma, and working in coal mines that had been condemned as unsafe in the 1920's.
Richard Booth
6 years ago
I have commented on a number of articles in this issue - perhaps too many - but this one begs for comment. When the editors quote a historian in the National Review in the opening paragraph, the reader can guess where the article is going. If the president apologized, he apologized; if he did not, he did not. And, he did not. If patriotism is something like love of country and willingness to defend it, President Obama has demonstrated, again and again, his willingness to do the hard work of reaching out to mend fences. He has rescued the nation from the Bush years without betraying Bush and he has avoided condemning Truman's decision, horrible as it was in its consequences. The issue is certainly not morally settled. Perhaps the president is humble enough not to second-guess what the circumstances were that led Truman to his decision. But, to visit the Japanese is to hold out a hand. It has nothing to do with a lack of patriotism. For Catholics, I should think that holding out a hand is what more of us should be doing.