75 years after Hiroshima, how can we work toward Pope Francis’ vision of a nuclear-free world? 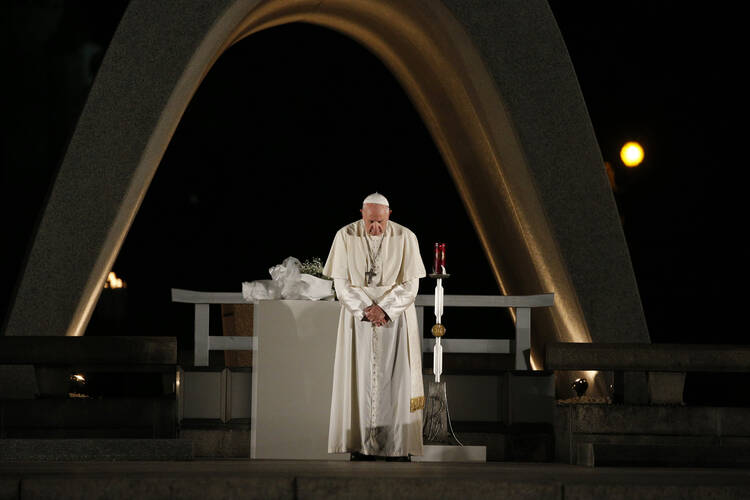 Pope Francis participates in a moment of silence during a meeting for peace at the Hiroshima Peace Memorial in Hiroshima, Japan, Nov. 24, 2019. In his message for the Jan. 1 World Day of Peace, Pope Francis said the world does not need more empty words, it needs committed, active peacemakers. (CNS photo/Paul Haring)

Wartime anniversaries are solemn events. Nations mourn their dead. Leaders reaffirm alliances. Crowds watch in hushed silence. Only shouted commands, the crack of boots on the pavement, the shifting of arms and the staccato snap of rifle shots break the silence.

Major anniversaries also evoke mixed emotions. The pain of loss mixes with the gladness of remembered victory. People who have suffered defeat or endured years of occupation may experience renewed anxiety and pain. A frisson of angst at the mutability of human events can wash over allies who were once enemies. Stolid but haunted veterans revisit the horrors they witnessed, and some feel a hollowness within that ceremony cannot allay.

Seventy-five years have proved too long to tolerate the risk of nuclear war.

Ritual and solemnity try to confirm commitment to the cause that evoked such enormous sacrifice. They attempt to salve the wounds of war and provide a sense of honor regained. Public memorial services, martial ceremonies and the national myths they sustain are insufficient, however, to heal the wounds of war or nourish the spirit of peace. For healing and reconciliation, a deeper transformation is needed. Only a conversion can bring genuine peace and initiate the kind of rethinking that will lead to a different future.

This August marks the 75th anniversary of the atomic bombings of Hiroshima and Nagasaki. For both Americans and Japanese, the anniversaries—Aug. 6 for Hiroshima and Aug. 9 for Nagasaki—are days that demand sober reflection on the place of nuclear weapons in our defense.

Seventy-five years have proved too long to tolerate the risk of nuclear war. This year the danger is as high as it has been since the beginning of the U.S.-Soviet nuclear rivalry in 1953. With arms control in ruins and a new nuclear arms race underway, it is urgent that we reflect on the existential threat nuclear weapons poses to all humanity and God’s creation.

By virtue of sharing a painful past, we Americans and Japanese bear a historic responsibility to work together for a postnuclear peace.

It should especially be a time for military and defense officials with authority over nuclear weapons to reflect on their awesome responsibilities, not just for their own nations’ defense but for the good of the whole human family. The anniversaries should likewise be times for national self-examination by citizens of nuclear-armed states.

By virtue of sharing a painful past, we Americans and Japanese bear a historic responsibility to work together for a postnuclear peace. During his visit to Japan in 1981, St. John Paul II identified this goal. “[L]et us promise,” he urged, “with our counterparts that we will tirelessly strive for disarmament and the elimination of all nuclear arms.”

Last November at the Hiroshima Peace Park, Pope Francis renewed that call. “The use of atomic energy for purposes of war is today, more than ever, a crime not only against the dignity of human beings but against any possible future for our common home,” the pope said. “How can we speak of peace even as we build terrifying new weapons of war?”

Two years before, Francis had condemned the “deterrence” strategy, with its constant threats of nuclear war, on which Russia and the United States rely for their own defense and the defense of their allies. That statement got less attention than the U.S. bishops’ strictly conditioned acceptance of deterrence in their 1983 pastoral letter “The Challenge of Peace” (in which deterrence was tolerated “not as an end in itself but as a step on the way toward a progressive disarmament”). But the 2017 papal condemnation clearly put an end to that conditional acceptance.

Among those who have taken notice, I have observed, many have dismissed Francis’ teaching. “Does he mean,” skeptics ask, “that military and political officials should immediately resign their commissions and appointments?” “Should we open ourselves up to nuclear blackmail?” others chide.

We all should thoughtfully ask ourselves: What more can I do to make this world safe from nuclear weapons? What am I being asked to do for the good of humanity and God’s creation?

Others belittle the importance of the July 2017 statement, claiming it was merely a “prophetic” speech without binding authority. But for Francis, it was a solemn judgment he has repeated in public speeches and addresses to diplomats numerous times.

One reason the condemnation has not quickly taken root is that Francis sets a high standard for moral maturity. He believes, in Nicholas Lash’s words, that teaching is not the same as commanding. He rejects moralism and legalism. At times, he has noted the limits of his papal authority and even identified a particular teaching as only his own, admitting that others might hold different positions. (See Chapter 8 of the apostolic exhortation “Amoris Laetitia.”) Genuine teaching, Pope Francis believes, invites learning, and especially attention to the movements of conscience and the Spirit within us to work toward the greater good.

In light of Francis’ moral pedagogy, how should military officers, elected officials, high-level appointees and all of us as citizens of a nuclear superpower (or of allied states, like Japan) respond to the papal condemnation?

After reassessing the deteriorating nuclear arms environment, we all should thoughtfully ask ourselves: What should I do differently? What more can I do to make this world safe from nuclear weapons? What am I being asked to do for the good of humanity and God’s creation?

We will not be the first to have done so. Fifteen years ago, George P. Shultz, William Perry, Sam Nunn and Henry Kissinger, once custodians of the U.S. deterrence strategy, declared that nuclear weapons should eventually be abolished. Over the years, dozens of retired generals and admirals, including former Strategic Air Command chiefs like General Lee Butler, have done the same.

The 75th anniversary of the atomic bombings should mark a fresh start for the movement to abolish nuclear weapons. Let it be the time when Americans and Japanese—with all people of good will—rip off the veneer of legitimacy from nuclear arms and speed the day when no nation will claim its people must rely on them for defense.

Drew Christiansen, S.J., former editor in chief of America, is Distinguished Professor of Ethics and Human Development at Georgetown University and a senior fellow at the Berkley Center for Religion, Peace and World Affairs. He is co-editor with Carole Sargent of A World Free From Nuclear Weapons: The Vatican Conference on Disarmament (Georgetown).