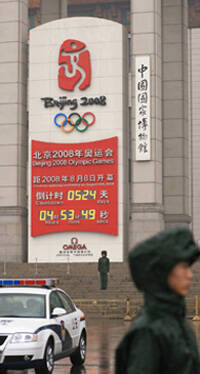 Many Americans remember a time when the Olympic Games were a source of international controversy and political statements, including the U.S. boycott of the 1980 Moscow Olympics (to protest the Soviet invasion of Afghanistan) and the Soviets’ retaliatory boycott of the 1984 Games in Los Angeles. In recent decades, however, most nations have left behind political causes and embraced the Olympics as a truly international celebration of athletic competition by the community of nations. The Beijing Games this month have tested that spirit of worldwide cooperation, not least because China remains among the world’s more oppressive regimes with regard to human rights, freedom of information and religious liberty.

The Chinese government has gone to great lengths to make these Olympics a showcase for the “new China,” celebrating the nation’s rise from an impoverished agricultural country to a vibrant and increasingly influential world power. The medal count will likely reflect China’s serious investment in that ancient source of national pride: the strength and valor of a nation’s athletes. The Chinese people, as many foreign visitors to China will testify, possess something akin to the American article of faith: that every nation on earth would profit by embracing their culture and way of life. And as the 20th century was the American century, so many believe the 21st will be the Chinese century. The Olympic Games of 2008 will give the world a chance to see what this might be like, as China’s problems and promise will be on very public display.

On Aug. 6 and 9 we remembered—and mourned—the 63rd anniversary of the dropping of atomic bombs on the Japanese cities of Hiroshima and Nagasaki. These bombings, which resulted in over 200,000 deaths, constituted an intentional killing of civilians, which is in violation of the laws of armed conflict. Since 1945 these bombings have often been defended as morally legitimate; some have claimed that an abrupt end to the war “saved a million American lives.” This utilitarian calculation, however, finds no support in Catholic moral theology. As the Second Vatican Council’s “Pastoral Constitution on the Church in the Modern World” teaches: “Any act of war aimed indiscriminately at the destruction of entire cities or extensive areas along with their population is a crime against God and man himself. It merits unequivocal and unhesitating condemnation.” It is always wrong to use nuclear weapons or to threaten to use them.

So how should we move forward? To exercise moral leadership in our world, the United States should repent of these crimes “against God and man.” This begins with an acknowledgment of wrongdoing and an apology to the Japanese people for targeting civilians with the intention of driving Japanese leaders “into submission.” Pope John Paul II modeled this type of moral leadership, frequently confessing historical sins of the church and asking for forgiveness. His actions are worthy of emulation.

Repentance also involves a firm commitment to restore justice. The United States must renew its commitment to the Nuclear Nonproliferation Treaty and move toward complete nuclear disarmament. Famous cold warriors like George P. Shultz and Henry A. Kissinger, among others, have also endorsed the goal of a world free of nuclear weapons.

“What’s the password?” The question has a long and colorful history. It conjures up stealthy messengers approaching castle doors bearing notes from kings. Or it brings to mind the deserts of Arabia as a thin-lined camel caravan crosses beneath the blazing sun, with sultans and harems, and genies in their silks and turbans bursting from burnished golden lamps. One can still see, as if real, an impassable door to a forbidden place as it magically swings open when the correct password is uttered: “Abracadabra.” Whoof! It is the stuff of children’s games and fairy tales. Or at least it was.

Today it is the stuff of technocriminals on the Internet, a new underworld where identity thieves play a high-stakes game for real, stealing passwords to enter the secret passageways that lead to the stash: personal financial data. Every individual and business with such information online is vulnerable. And as for policing cyberspace, it is as vast as it is virtual. We have now become characters in a tale of our own imagining. Patching the holes in the Internet, like a cosmic tent overhead, a strategy security experts at Microsoft have been urging businesses to implement, will soon become a common, added cost of doing business online. Fortunately, lawmakers and security experts are on the scene as the new castle guards, whose vigilance is key to a happy ending. For now, though, attempts at online thievery will persist, at least as long as the password remains the point of entry.

The Editors
Show Comments (
3
)
Comments are automatically closed two weeks after an article's initial publication. See our comments policy for more.
Elaine Tannesen
13 years 10 months ago
Thank you for your eloquent and timely comment on "A-Bombs and Repentance". If the Catholic church in the U.S. truly preached this message from the pulpit, our country and the entire face of the earth might begin to turn from our glorification of violence to the peace that Jesus promised us.
13 years 10 months ago
Your call for repentance and an apology to the Japanese people is right in keeping with the assertion of the U.S. bishops in "The Challenge of Peace: God's Promise and Our Response." In paragraph 302, they said: "After the passage of nearly four decades and a concommitant grouwn in our understanding of the ever growing horror of nuclear war, we must shape the climate of opinion which will make it possible for our country to express profound sorrow over the atomic bombing in 1945. Without that sorrow, there is no possibility of finding a way to repudiate future use of nuclear weapons or of conventional weapons in such military actions as would not fulfill just-war criteria."
13 years 10 months ago
I have never been so incensed with an editorial as when I read "A-Bombs and Repentance". Yes, on Aug. 6/9th we mourned the dropping of the A-bombs on Japan. However, what many mourned is the fact that the relentless, merciless, negligent and persistent efforts by the leaders of Japan to start and wage war had put their entire populace in peril. They are solely responsible for the devestation brought upon their country. You mockingly talk of the "utilitarian" estimates of U.S. losses from an invasion as if they are imaginary. Put them aside as you like, what about the millions of Japanese civilians who would have been forced into war and killed during such an invasion?! It is a fact that bomb not only saved American lives it saved many more Japanese lives. Query, what are your estimates of total losses if the bombs were not dropped? As for the American cannon fodder that would have been lost, new evidence suggests that they would have been opposed by nine Japanese divisions rather than the five Truman expected. Hence, those casualty estimates are probably quite low, but who is counting. You can also rest assured that those 9 divisions would not have been carrying any white flags. Perhaps you think Japanese leadership could have been coaxed into surrendering. Far from it. In fact, within the last month we learned that the leader of the Japanese army wrote in his diary that even the atomic bombs did deter him from seeking to continue the war. To suggest that, the United States should apologize for using maximum force to prevent a maniacal regime from causing the deaths of millions of more innocent people, borders on pathalogical. How would our government have explained to the families of those killed in an invasion that we had a bomb to end the war earlier. Talk about a need for apologizing! It is fact, Japan started the war in the Pacific with their thirst for global dominance. They ruthlessly killed millions of innocent people. All of this was done with the approval of the Japanese "civilian" population. They should not have expected to be immune from attack. By the way, the fact we spent millions of dollars rebuilding their country speaks volumes to the integrity of how the U.S. managed our role in the war. Finally, you sheepishly hide your American bashing opinion behind the Church by raising the "Pastoral Constitution on the Church from the Second Vatican Council". This is both illogical and slight of hand. The bombs were dropped 17 years before the Constitution was even written. Shame on you and your magazine, a disgrace to the multitudes who died in places like Bataan, Iwo Jima, Tarawa and Okinawa. It was a brutal war, we did what needed to be done, get over it!