Federal judge speaks out on son’s murder, calls for protection of judges 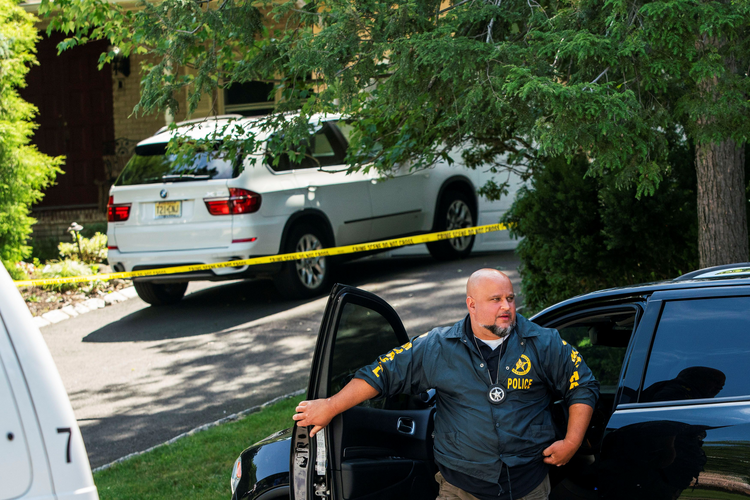 A law enforcement officer is seen outside of the North Brunswick, New Jersey, home of federal Judge Esther Salas, where her son was shot and killed and her defense attorney husband was critically injured July 19, 2020. Salas spoke publicly about the tragedy for the first time Aug. 3. (CNS photo/Eduardo Munoz, Reuters)

WASHINGTON (CNS) -- Federal Judge Esther Salas said the July 19 death of her only child, Daniel, killed at their family home by a lawyer, could not be in vain and in an Aug. 3 video called for the protection of "my brothers and sisters on the bench."

She asked to start a dialogue about the online availability of judges' personal information.

Salas recounted how following a 20th birthday celebration for her son, Daniel Anderl, with his college friends from The Catholic University of America, she was speaking with him in the basement of their home when the doorbell rang.

"We were chatting, as we always do, and Daniel said, 'Mom, let's keep talking. I love talking to you, Mom,' and it was at that exact moment that the doorbell rang," she recounted, taking deep breaths and holding in pain. "And Daniel looked at me and said, 'Who is that?' Before I could say a word, he sprinted upstairs.

"Within seconds, I heard the sound of bullets and someone screaming 'no.' I later learned that this monster, who had a FedEx package in his hand, opened fire, but Daniel being Daniel, protected his father and he took the shooter's first bullet directly to the chest. The monster then turns attention to my husband and began to shoot at my husband, one shot after another."

Lawyer Roy Den Hollander, who later committed suicide, has been identified as the shooter. Den Hollander, who has described himself as "anti-feminist," was found dead near Liberty, New York, a day after the shooting. Mark Anderl, the judge's husband, remains in the hospital.

"In my case, the monster knew where I lived and where and what church we attended and had a complete dossier on me and my family," said Salas in the video. "At the moment, there is nothing we can do to stop it and that is unacceptable. My son's death cannot be in vain, which is why I am begging those in power to do something to help my brothers and sisters on the bench. Now, more than ever, we need to identify a solution that keeps the lives of federal judges private."

The family is said to be part of St. Augustine of Canterbury Parish in Kendall Park, New Jersey, in the Metuchen Diocese, and Daniel Anderl, who was set to start his junior year at Catholic University in Washington, attended the parish school there. Salas said she and her husband, an attorney, had just returned from church and had given their only son "a pass on his usher duties." They all had started cleaning up, ending a "glorious" birthday weekend of "love, laughter and smiles."

Now, even as her husband remains in the hospital recovering from multiple surgeries, "we're living every parents' worst nightmare: making preparations to bury our only child," she said.

"My family has experienced a pain no one should ever have to endure," she said. "And I am here asking everyone to help me assure that no one ever has to experience this kind of pain. We may not be able to stop something like this from happening again, but we can make it hard for those who target us to track us down."

She thanked medical personnel as well as federal, state and local authorities who had helped her and her husband and all those who offered prayers for the family.

Salas, the first Latina to serve as a federal judge in New Jersey, was confirmed in 2011 to serve on the U.S. District Court for the District of New Jersey.