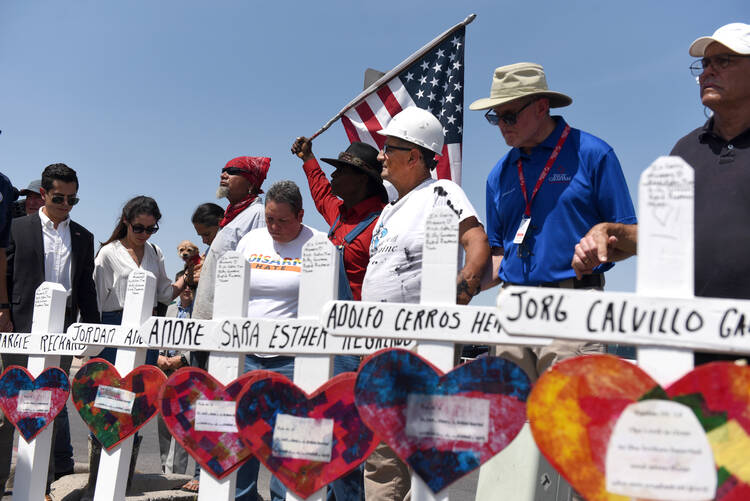 People hold hands in prayer Aug. 5, 2019, next to crosses in honor of victims of a mass shooting at a Walmart store in El Paso, Texas, two days earlier. A year after the deadly shooting, El Paso Bishop Mark J. Seitz has announced the formation of a group to address racism as a way to honor the victims. (CNS photo/Callaghan O'Hare, Reuters)

WASHINGTON (CNS) -- He was surrounded by photos of fellow El Pasoans, who spent the last moments of their lives one summer evening a year ago, running for safety while shopping at superstore.

"We will have time for prayer, for silence, for calling to mind their names, both of those who died and those who were wounded on that day," said Bishop Mark J. Seitz of El Paso, Texas, recalling the mass shooting at an area Walmart Aug. 3, 2019. "We will speak their names and remember them especially by our active prayer which we believe can be the most powerful way that we can accompany and assist those suffering."

But prayer alone, while powerful, has to be accompanied by actions to make sure the hate visited on the El Paso community that day vanishes one day, said Bishop Seitz Aug. 1, while gathered with civic and other spiritual leaders announcing the formation of a commission to examine ways that may lead to the eradication of the hate that prompted the attack taking the lives of the 23 El Pasoans and wounding another 25 victims.

"We really believe that ceremonies of remembrance, while they're important, and times of prayer, while they're essential, aren't enough," he said. "We also have to deal with the reality that led to those events on that day and were very clearly present in the mind and heart of the attacker."

Bishop Seitz was clear about what he believed were the motivations behind the attack by alleged shooter Patrick Crusius, of Allen, Texas. Cruisius is facing 23 counts of hate crimes resulting in death, and 23 counts of use of a firearm to commit murder, among other charges leveled against him. Authorities have said the attack at the Walmart was believed to have been aimed at Latinos, as the alleged shooter reportedly told authorities he was targeting "Mexicans."

Authorities later found a document allegedly written by the gunman that was described as anti-immigrant and was about the "Hispanic invasion" of the state.

It was "the presence in our country of racism and ideologies of white supremacy, which clearly motivated him," said Bishop Seitz during the news conference announcing the commission.

"He was not the inventor of that way of thought. What happened on that day was caused by a whole history of racist thought in our country, of exclusion, of making people of various degrees of worth in our minds, and we have to address it," the bishop said. "So, what I would like to propose today is the creation of a commission on race and equity that will work in our community in this coming year."

Though the commission is still in its infancy, Bishop Seitz and other religious and city leaders came together to produce something tangible, even as the community lacked a way to mourn together because of the restrictions brought about by the pandemic. An interfaith prayer service took place and included survivors and families of those who died but attendance was limited.

"We thought that this might be a good way to kick off this time of remembrance. This weekend last year, a Saturday morning, right around this time, chaos broke loose in our city," he said. "It was a day that changed the lives of so many, ended the lives of too many. There's no person in El Paso or our region that hasn't been changed by the events that we saw take place one year ago this weekend."

He said the idea of the commission came about to produce something to honor those affected and that wasn't limited to a memorial.

He said the commission would have members from a variety of faiths and groups with the idea of bringing people together for "an honest conversation" directed at making structural changes.

"It's more and more clear to us that people of color in our community have a tough go of it," he said. "We need to hear them ... we need to deal with the things that still fall short of that ideal of equality that was spoken from the time of our founding fathers and mothers."

More: US Church / US Politics / Guns