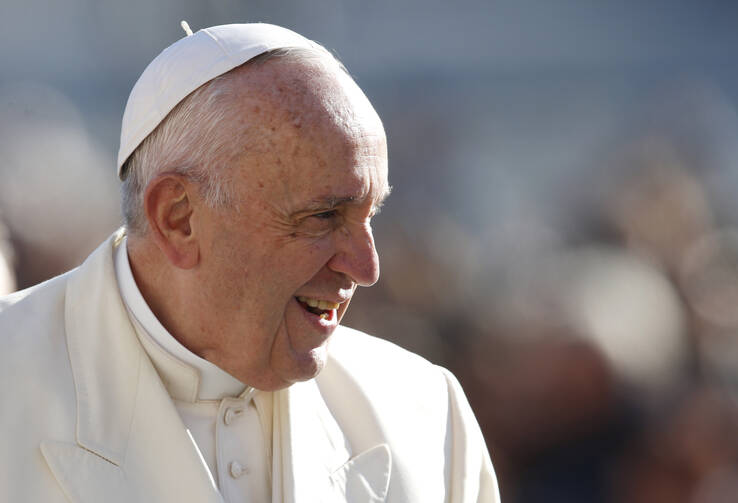 Pope Francis is pictured during his general audience in St. Peter's Square at the Vatican Nov. 8. (CNS photo/Paul Haring)

Pope Francis warned Friday that international relations can no longer be "held captive" by policies of fear and nuclear deterrence, and urged government leaders to instead pursue an admittedly utopian future of a world free of atomic weapons.

Francis welcomed Nobel peace laureates, U.N. and NATO officials and diplomats from countries with the bomb to a Vatican conference aimed at galvanizing support for a global shift from the Cold War-era policy of nuclear deterrence to one of complete nuclear disarmament.

The pope acknowledged that current tensions might render such efforts "increasingly remote." But he said reliance on nuclear weapons to maintain a balance of power "creates nothing but a false sense of security," and that any use of them, even accidental, would be "catastrophic" for humanity and the environment.

"International relations cannot be held captive to military force, mutual intimidation and the parading of stockpiles of arms," he said. Peace and security among nations, he said, must instead be "inspired by an ethics of solidarity."

Peace and security among nations, he said, must instead be "inspired by an ethics of solidarity."

He added that "progress that is both effective and inclusive can achieve the utopia of a world free of deadly instruments of aggression."

Francis fully endorsed the new U.N. treaty calling for the elimination of atomic weapons, saying it filled an important legal gap in international law. Among those speaking at the two-day meeting were Beatrice Fihn, executive director of the International Campaign to Abolish Nuclear Weapons, the advocacy group that won this year's Nobel Peace Prize for its instrumental role in getting the treaty passed.

The conference comes amid mounting tensions on the Korean peninsula and heated rhetoric between Washington and Pyongyang over the North's nuclear ambitions. But organizer Cardinal Peter Turkson told the audience Friday that the gathering was planned well before President Donald Trump began his Asia trip, where the Korean nuclear threat has been at the top of his agenda.

Drawing laughs from the largely secular audience, Turkson said it was "divine providence" that the conference and U.S. president's trip coincided.

The conference is the first major international gathering since 122 countries approved the new U.N. treaty in July calling for the complete elimination of nuclear weapons. None of the nuclear powers and no NATO members signed on, arguing that the treaty's lofty ideals were unrealistic given the rapid expansion of North Korea's nuclear weapons program.

But Fihn, head of the Nobel-winning ICAN, said the treaty will have an impact even on those nuclear states that refused to participate. Previous treaties banning chemical and biological weapons were a crucial first step in making such arsenals illegal, and put pressure on countries that had the weapons to disarm.

World leaders are meeting at the Vatican to discuss nuclear weapons. Here’s why.
Kevin Clarke

"If international law says it's prohibited, it's going to make it a lot harder for them (nuclear weapons states) to justify their decisions to modernize and invest in new types of weapons," she told The Associated Press on the sidelines of the conference.

And if nuclear weapons were to be used, the effects would be devastating for humanity and future generations, warned Francois Bugnion of the International Committee of the Red Cross.

"As the ICRC learned in Hiroshima, there are no effective means of assisting survivors while protecting those delivering assistance," he said. "The majority of victims will be denied the medical assistance they need."

The United States was represented at the conference by its deputy ambassador to the Holy See, Luis Bono, while Russia sent an ambassador and a top nuclear expert, Alexei Arbatov. China and North Korea were invited, but organizers said they didn't attend. Neither has diplomatic relations with the Holy See.

Bono said he wanted to attend because "we're interested to hear what the Holy See is saying" about nuclear disarmament. He noted that Trump was in China meeting with President Xi Jinping and trying to find ways to pressure North Korea to abandon its nuclear aspirations.

Render onto Caesar what is Caesar's and to God what is God's. One can still argue the merits of the bombing of Nagasaki and Hiroshima, which brought WWII to an end and heralded the advent of the Cold War. From the beginning there have been advocates to disarm, but even a reasonable person could assume that if America and the Cold War allies of England and France had disarmed, we probably would not still have freedom loving democracies in the world. There is no question that America, with all it's warts has saved the world from a world war for over seventy years and continues to lead by peace through strength regarding nuclear expansion in North Korea and Iran.
President Trump's recent speech in Korea was an excellent and well balanced explanation of the facts, the threats and the merits for all concerned. Once more it has placed America foremost as a peacemaker, through it's ability to remain strong - a price that all Americans pay through service and taxes.
That is not to say we should not be praying for a successful outcome to these potentially dangerous situations.

Removing nuclear weapons does not mean disarm totally. One could still have conventional weapons. I found Trumps speech just slightly bellicose than his usual. He did not thought out his usual insults and threats to annihilate North Korea. Would thst he were the peace maker. Recall his continuing rejection of the Iran deal. He has rejected the UNs verification of Iran's compliance. He has egged on Saudi Arabia in the Middle East and it's brutal attacks in Yemen. He has encouraged Israel in its confiscation of Palestinian land and it's subjugation of those people. And of course he continually stoked divisiveness in America.