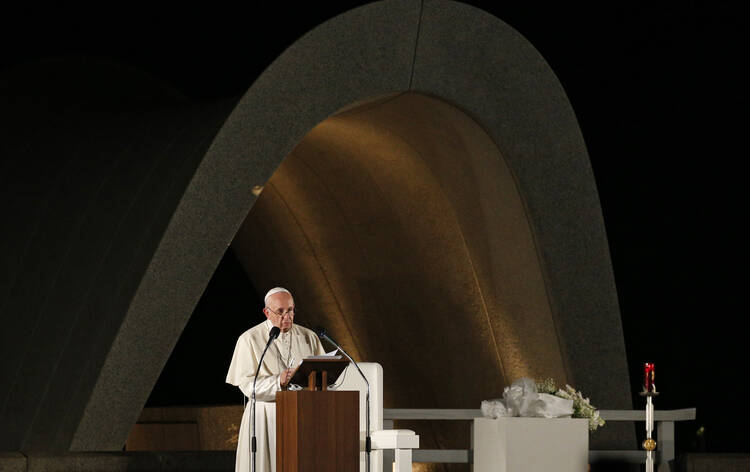 Pope Francis speaks during a meeting for peace at the Hiroshima Peace Memorial in Hiroshima, Japan, Nov. 24, 2019. (CNS photo/Paul Haring)

From Nagasaki and Hiroshima, the only two cities in the world to be destroyed by atomic bombs, Pope Francis made an impassioned appeal for the total elimination of nuclear arms. “The use of atomic energy for purposes of war is immoral, just as the possession of atomic weapons is immoral,” he said. “We will be judged on this.”

The pope spoke at the rain-drenched Atomic Bomb Hypocenter Park in Nagasaki on the morning of Nov. 24, near the spot where the United States dropped the second bomb on Aug. 9, 1945, instantly killing 27,000 people. Pope Francis declared that “the possession of nuclear and other weapons of mass destruction is not the answer” to humanity’s deepest desire for “security, peace and stability.” In the evening, he visited the Peace Memorial in Hiroshima, honoring the tens of thousands killed by an atomic bomb there, too.

Ever since becoming pope in 2013, Francis wanted to come to these two sites of unprecedented destruction and suffering. He realized that wish today, and in speeches at both locations addressed the threat and use of nuclear arms, the ideology of mutually assured destruction, the arms race and the search for world peace. He is the second pope to come to these sites after John Paul II, who came in 1981.

Pope Francis visited Nagasaki first, a city of some 400,000 people in the hill country that is the historic heartland of Catholicism in Japan and home to many martyrs.

He arrived at the park in the morning amid driving rain. There, at a place near the epicenter of the bomb explosion, Francis laid a wreath and prayed in silence in memory of those killed on that day. Then, after lighting a candle, he read his speech in Spanish to a crowd of some 200 Japanese, and to a global audience following on television.

Francis stated that “the possession of nuclear and other weapons of mass destruction is not the answer” to humanity’s desire for security, stability and peace in the world. Indeed, he said, “our world is marked by a perverse dichotomy that tries to defend and ensure stability and peace through a false sense of security sustained by a mentality of fear and mistrust, one that ends up poisoning relationships between peoples and obstructing any form of dialogue.”

He declared that “peace and international stability are incompatible with attempts to build upon the fear of mutual destruction or the threat of total annihilation.”

Recalling “the catastrophic humanitarian and environmental consequences of a nuclear attack” that Nagasaki witnessed, Francis said, “our attempts to speak out against the arms race will never be enough.”

He went on to forcefully denounce the arms race because “in a world where millions of children and families live in inhumane conditions, the money that is squandered and the fortunes made through the manufacture, upgrading, maintenance and sale of ever more destructive weapons, are an affront crying out to heaven.”

“In a world where millions of children and families live in inhumane conditions, the money that is squandered and the fortunes made through the manufacture, upgrading, maintenance and sale of ever more destructive weapons, are an affront crying out to heaven.”

He stated unequivocally that “the Catholic Church is irrevocably committed to promoting peace between peoples and nations.” He insisted that “we must never grow weary of working to support the principal international legal instruments of nuclear disarmament and non-proliferation, including the Treaty on the prohibition of nuclear weapons.” He recalled with approval that last July “the bishops of Japan launched an appeal for the abolition of nuclear arms.”

Then, saying he is personally convinced that “a world without nuclear weapons is possible and necessary,” Pope Francis called on the world’s political leaders “not to forget that these weapons cannot protect us from current threats to national and international security.” He called on them “to ponder the catastrophic impact of their deployment, especially from a humanitarian and environmental standpoint, and reject heightening a climate of fear, mistrust and hostility fomented by nuclear doctrines.” He emphasized the need to create instruments “for ensuring trust and reciprocal development” and the need for “leaders capable of rising to these occasions.”

The Vatican has expressed increasing concern about U.S. President Donald Trump’s continuing delay in beginning talks with Russia on extending or renewing the Strategic Arms Reduction Treaty and for allowing the U.S.-Russian treaty on intermediate-range weapons to expire.

The pope invited people to join him “in praying each day for the conversion of hearts and for the triumph of a culture of life, reconciliation and fraternity,” and suggested that they make their own the prayer of Saint Francis of Assisi: “Lord make me an instrument of your peace.”

From there, Francis went to the memorial of the Nagaski martyrs, whose memories had so inspired him as a young man that he wanted to come to Japan as a missionary, and then celebrated Mass in a baseball stadium.

Later in the afternoon he took a one-hour plane ride from Nagaski to Hiroshima, a city of almost 2 million people. The sun had set when he arrived at the Peace Memorial in Hiroshima, which stands under the place where the United States, in agreement with the United Kingdom, dropped the world’s first atomic bomb that immediately killed between 60,000 and 80,000 people and a total of 140,000 by the end of that year.

It was evening when Pope Francis reached the memorial. Some 1,500 Japanese were present for the solemn event, together with 20 religious leaders and 20 survivors of that bombing. There was a long period of great silence as Francis greeted all the survivors one by one, and embraced one woman who was in tears. Francis then laid flowers in memory of the victims and prayed in silence. He then lit a candle made by the Roman Curia for the occasion. Then everyone was invited to stand for a moment of silence as a gong sounded.

Then two survivors, Yoshiko Kajimoto who was 14, and Kojí Hosokawa, who was 17

and living in Hiroshima when the bomb exploded, described with dignity and emotion their terrible experience to Francis.

Ms. Kajimoto was working in a factory when the bomb was dropped. She was buried under timber and tiles, but eventually managed to get free. “When I went outside, all the surrounding buildings were destroyed,” she told the pope. “It was as dark as evening and smelled like rotten fish.”

Helping evacuate the injured, she saw “people walking side by side like ghosts, people whose whole body was so burnt that I could not tell the difference between men and women, their hair standing on end, their faces swollen to double size, their lips hanging loose, with both hands held out with burnt skin hanging from them.”

“No one in this world can imagine such a scene of hell,” she said.

Mr. Hosokawa, was not able to attend the ceremony with the pope, but his testimony was read out: “I think everyone should realize that the atomic bombs were dropped, not on Hiroshima and Nagasaki, but on all humanity,” he wrote.

After listening to the two testimonies, Francis began by saying “peace be with you” and recalling what happened when the bomb fell: “In barely an instant, everything was devoured by a black hole of destruction and death. From that abyss of silence, we continue even today to hear the cries of those who are no longer. They came from different places, had different names, and some spoke different languages. Yet all were united in the same fate, in a terrifying hour that left its mark forever not only on the history of this country, but on the face of humanity.”

Spires or Tombs?: The editors on Hiroshima and Nagasaki
The Editors

He told those present, “I felt a duty to come here as a pilgrim of peace, to stand in silent prayer, to recall the innocent victims of such violence, and to bear in my heart the prayers and yearnings of the men and women of our time, especially the young, who long for peace, who work for peace and who sacrifice themselves for peace. I have come to this place of memory and of hope for the future, bringing with me the cry of the poor who are always the most helpless victims of hatred and conflict.”

He denounced “the use of atomic energy for purposes of war” as “a crime” against humanity and “immoral.” He added, “so too the possession of nuclear weapons is immoral, as I said already two years ago.”

Nine states have nuclear weapons: the United States, Russia, China, France, the United Kingdom, Israel, India, Pakistan and North Korea. The United States and Russia together have 14,000 of the 15,000 nuclear weapons known to exist in the world and 2,000 of these are said to be still on “high alert.” Francis has expressed deep concerned that such weapons could be triggered by accident or human error, and so in Nov. 2017 he categorically condemned not only “the threat of their use” but also “their very possession,” the first pope to do so.

He told his global audience in Hiroshima, “future generations will rise to condemn our failure if we spoke of peace but did not act to bring it about among the peoples of the earth. How can we speak of peace even as we build terrifying new weapons of war? How can we speak about peace even as we justify illegitimate actions by speeches filled with discrimination and hate?”

Pope Francis prayed that “the abyss of pain endured here may remind us of boundaries that must never be crossed.”

At the day’s end, Pope Francis took the one-hour plane ride to Tokyo, where tomorrow he will meet the emperor and prime minister of Japan.