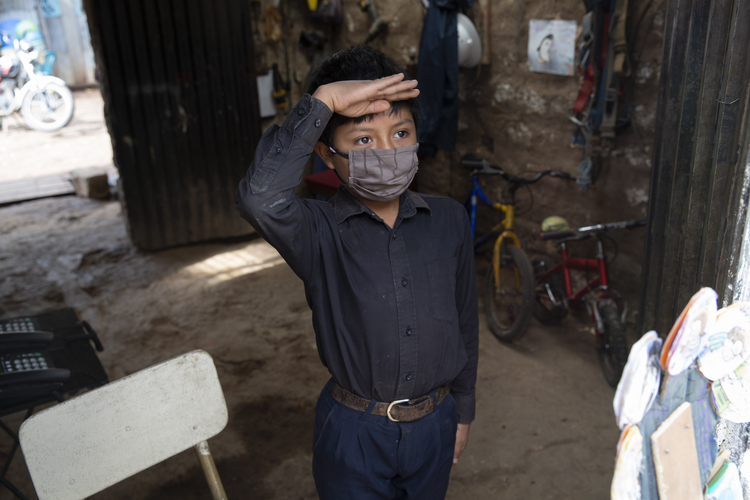 Standing just inside the doorway of his home in a black button down shirt tucked into navy blue trousers, 11-year-old Oscar Rojas greets his teacher Gerardo Ixcoy in Santa Cruz del Quiche, Guatemala, on July 15. “Teacher Lalito only comes for a little while to teach me, but I learn a lot.” (AP Photo/Moises Castillo)

But this is not just transportation. It’s also a mobile classroom, with plastic sheets to protect against virus transmission, a whiteboard and a small solar panel that powers an audio player he uses for some lessons.

Each day, the 27-year-old pedals among the cornfields of Santa Cruz del Quiché to give individual instruction to his sixth-grade students.

On a recent day, 12-year-old Paola Ximena Conoz wiped her glasses as she waited for Ixcoy to set up just outside the door to her home. They greeted each other warmly — though without contact. Ixcoy deployed the mop that measures the distance between him and his students.

Standing behind the plexiglass window of his tricycle, he produced a pizza box.

Ixcoy is known universally as “Lalito 10,” a childhood nickname that stuck. He tries to visit each of his students twice a week.

The classroom-on-a-trike was born of necessity. Ixcoy quickly realized there were challenges to remote learning in this farming community in Guatemala’s western highlands.

“I tried to get the kids their work sheets sending instructions via WhatsApp, but they didn’t respond,” Ixcoy said. “The parents told me that they didn’t have money to buy data packages (for their phones) and others couldn’t help their children understand the instructions.” Illiteracy in the area is about 42%. And in the entire department or province, only about 13% of homes have internet.

“The cellphones they have at home are very basic,” Ixcoy said. “They can’t download apps like Zoom that would allow you to give a virtual class.”

Paola’s 36-year-old father, Victor Conoz, traveled regularly to Belize to sell produce. Due to the pandemic, he hadn’t worked in four months.

“The situation is really complicated,” he said. “You’re not going to believe me, but some days we didn’t have food and buying data for the cellphone was impossible for me.”

For the kids, the classes break up the monotony of weeks in quarantine. Eleven-year-old Oscar Rojas waited anxiously in the doorway of his home in a black button-down shirt tucked into navy blue trousers. He lined up his notebooks and pencils and slipped on a face mask.

The pandemic has really altered Oscar’s routine, “because now I’m not receiving normal classes,” he said. “Teacher Lalito only comes for a little while to teach me, but I learn a lot.”

In the afternoon, Ixcoy pedals for home to beat the curfew. He and his wife Yessika and their 3-year-old son Dylan walk to a small plot of land they rented to grow corn as another source of income. They also planted a vegetable garden beside their home.

The families he serves often struggle to stave off hunger.

“One day the mother of a student told me they didn’t have food,” Ixcoy said. “When class ended and I began to ride away on my tricycle she calls me and with a look of gratefulness says, ‘Teacher, they gave me some food, I want to share half with you.’”

“I arrived home crying,” he recalled.

This article also appeared in print, under the headline “GoodNews: Guatemalan teacher hits the road on a tricycle built for school ,” in the September 2020, issue.