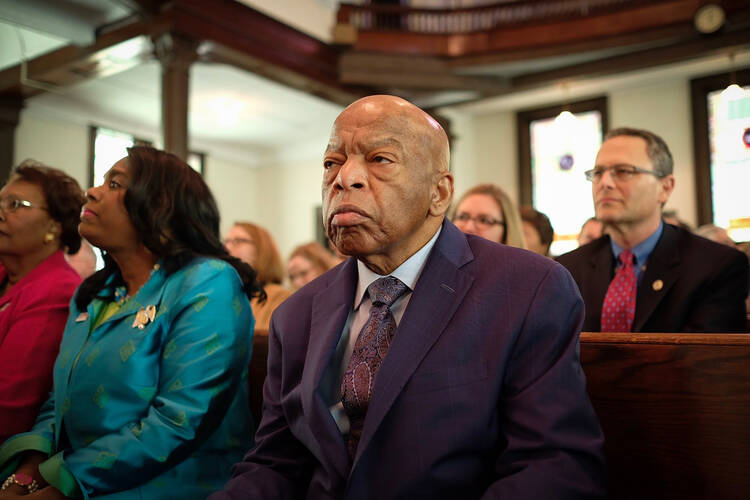 Rep. John Lewis of Georgia is shown in a scene from the documentary "John Lewis: Good Trouble" about the longtime racial equality activist and member of Congress. (CNS photo/courtesy Magnolia Pictures)

It had been more than 50 years since John Lewis had first traveled through Montgomery, Alabama as a Freedom Rider, a fateful journey that would leave him bloodied and beaten and shape the course of his life.

But the memories instantly flooded back, fresh and raw, as the civil rights icon told my family his story in full, in his gentle, slow style.

We’d grown up as first hand witnesses to the civil rights movement, with Mr. Lewis a continuous and steady presence in our lives. But today, he wanted to share more. With us.

Four busloads were bound for Selma during the annual Faith and Politics Pilgrimage. Mr. Lewis, now a Georgia congressman, had started the bipartisan, multi-faith event in 1998 in order to help other members of Congress commemorate the 1965 Bloody Sunday march.

On this day in the spring of 2012, three of those buses were filled with senators, members of Congress and other public officials. The fourth held my mother, Ethel Kennedy, my daughters, siblings and dozens of nieces and nephews. Mr. Lewis chose us, just as he’d done in some of the most pivotal moments of our lives.

Civil rights work was different, he said. It was “good trouble.”

As we began our trip, he stood behind the driver, microphone in hand. The son of sharecroppers who first dreamed of being a preacher recalled his mother’s frequent admonishment not to get into trouble. But civil rights work was different, he said. It was “good trouble.”

Before boarding the bus, we had started the day at First Baptist Church where the Freedom Riders sought sanctuary after their mauling at the Montgomery Bus station in May 1961.

The Freedom Riders left Washington, D.C. on May 5, 1961. This small interracial group, which included Mr. Lewis, was fighting against the widespread violation of the Supreme Court ruling which banned segregated seating, restrooms and restaurants.

Mr. Lewis told us that First Baptist, led by the magnificent Rev. Ralph Abernathy, was packed with Black men, women and children singing “We Shall Overcome.” At nightfall, the white supremacists hurled bricks at the stained glass windows, tossed Molotov cocktails through the broken glass and overran the federal marshals sent to protect them.

Mr. Lewis recalled that in the basement, he, Martin Luther King, Jr. and Rev. Abernathy called my father, then U.S. Attorney General, on the phone. Finally, at the direction of the White House, the National Guard arrived and dispersed the white supremacist crowd.

“Without Bobby, I’m not sure I would be here today,” he told our bus.

Mr. Lewis’s perspective was integral to my father’s commitment to civil rights, giving a clear voice to the struggle to end racial segregation and discrimination in the United States.

When I was a child, Daddy told us that there was no group he admired more than the Freedom Riders. Mr. Lewis’s perspective was integral to my father’s commitment to civil rights, giving a clear voice to the struggle to end racial segregation and discrimination in the United States.

When my father ran for president, he asked Mr. Lewis to help organize the Black community in Indiana. Working with local organizers, Mr. Lewis arranged Daddy’s largest Black rally in the state, on April 4, 1968. On the way to Indianapolis, my father learned King had been murdered. In large part due to the many years of working with Mr. Lewis, my father’s admiration for his courage and commitment, and the trust they shared, Daddy ignored Mayor Richard Lugar’s plea to cancel the event. Instead he heeded Mr. Lewis’s advice, and delivered one of the most memorable speeches of the 20th century. Afterwards, Mr. Lewis said, they returned to the local hotel, and cried.

The next day, at Daddy’s request, Mr. Lewis went to Memphis to help arrange for King’s body to be returned to Atlanta. Then, Mr. Lewis arranged for Daddy to meet with Coretta Scott King the night before King’s funeral.

A few weeks later, Mr. Lewis traveled to California, where he was in charge of organizing the Black vote, while Cesar Chavez and Dolores Huerta organized the Latinx. Sometimes he would canvass together with Chavez. Imagine opening your door to find Cesar Chavez and John Lewis asking you to give a presidential candidate your vote.

Imagine opening your door to find Cesar Chavez and John Lewis asking you to give a presidential candidate your vote.

On June 4, 1968, Mr. Lewis was at the Ambassador Hotel waiting upstairs to meet Daddy after his victory speech. He cried, he later told me, all the way home to Atlanta.

In the years that followed, he shared a deep and abiding friendship first with my mother and later, with me. They didn’t call one another to reminisce about the old days. Yet that bond, over loss and sacrifice and shared principles, could be clearly seen when they locked eyes, when they encountered one another at political events and events for Robert F. Kennedy Human Rights, where Mr. Lewis served on the board.

He was a critical voice in the designing of our programs, an inspiration for our Speak Truth to Power lesson plans for students, and a recipient of our Ripple of Hope award.

My last long conversation with Mr. Lewis came as I was writing Ripples of Hope: Robert F. Kennedy in 2018. It was an emotional conversation I have recalled many times since word came of his death following a brave 7-month battle with pancreatic cancer.

“I truly believe something died in all of us,” he said of my father’s death. I know something died in me. ...that’s why you have to keep going, moving on, and trying to inspire more young people to stand up, to get up.”

I asked Mr. Lewis how he felt then, four and half decades after being bludgeoned by state troopers. He replied with one word: “Grateful.”

That’s what Mr. Lewis kept doing, every day, using his time on this earth to advance the causes of civil rights and social justice, cementing himself as one of the last remaining unifying forces in American politics today. He was unafraid to speak truth to power, be it by speaking frankly of the still-systemic racism pervasive in our country, by criticizing the Iraq war or decisions of the current presidential administration or by staging a firearm safety legislative sit-in in Congress.

When our bus arrived in Selma that day, our family marched over the Edmund Pettus Bridge, our arms linked with his. I asked Mr. Lewis how he felt then, four and half decades after being bludgeoned by state troopers. He replied with one word: “Grateful.”

Looking back, I am grateful, too. Grateful for the moral courage of Mr. Lewis and the civil rights defenders who finally made our country a true democracy. One person, one vote. Grateful for the changes that have taken place since 1963, and for those who work to dismantle the continuing institutions of anti- Black violence in our land. Inspired by the women and men in our country and around the world who have devoted their lives and sometimes paid the ultimate price, for human rights. And grateful for all those who listen to the John Lewis inside us all, imploring, “get into trouble—good trouble.” 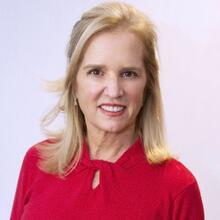