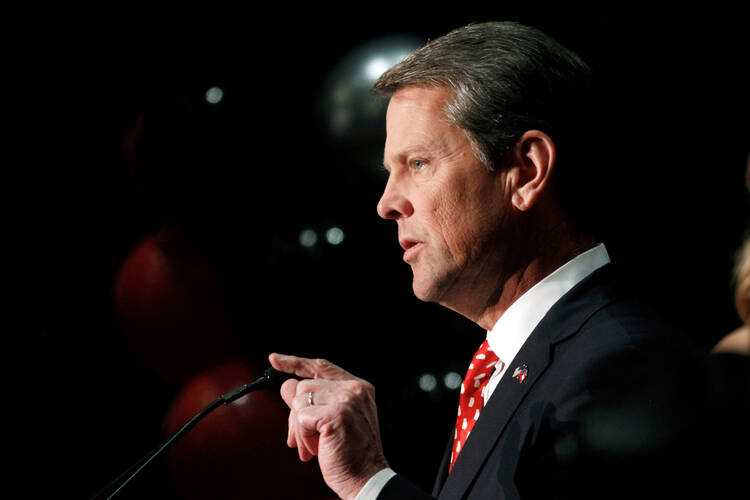 Georgia Republican Gov. Brian Kemp, pictured in a Nov. 7, 2018, photo, signed legislation May 7, 2019, to ban abortions in the state once a fetal heartbeat is detected, which is around six weeks. (CNS photo/Chris Aluka Berry, Reuters)

ATLANTA (CNS) -- The head of a leading national pro-life organization said she was disappointed "the will of the people is being thwarted" in a federal judge's permanent block to keep Georgia's "heartbeat bill" from ever taking effect.

It would have banned abortions once a fetal heartbeat is detected, which is around six weeks. It had exceptions to save the life of the mother and in the case of rape and incest if a police report is filed. It also makes exceptions to allow abortions when a fetus has serious medical issues.

On July 13, District Judge Steve C. Jones of the U.S. District Court for the Northern District of Georgia ruled the law infringed upon constitutional rights, including those established by the 1973 Supreme Court decision Roe v. Wade and the 1992 decision Planned Parenthood v. Casey.

"As this ban directly conflicts with binding Supreme Court precedent (i.e., the core holdings in Roe, Casey, and their progeny) and thereby infringes upon a woman's constitutional right to obtain an abortion prior to viability, the court is left with no other choice but to declare it unconstitutional," Jones said in his ruling.

"The beating heart of a vulnerable unborn child should awaken the conscience of our nation, and Georgia helped lead the way with the passage of its heartbeat bill," said Marjorie Dannenfelser, president of the Susan B. Anthony List in Washington. "We are disappointed that the will of the people is being thwarted with today's decision striking down this compassionate law.

"We thank Gov. Brian Kemp for championing this legislation, and we stand with pro-life Georgians in the fight to protect this strong, compassionate pro-life law," she said.

Of Jones' July 13 ruling, Kemp's office said in a statement: "We will appeal the court's decision. Georgia values life, and we will keep fighting for the rights of the unborn."

When it was passed, Republican Rep. Ed Setzler, the bill's author, said the legislation was one of "common sense" to "balance the difficult circumstances women find themselves in with the basic right to life of a child."

In response, Democratic Sen. Jen Jordan said: "There's nothing balanced about it: It's an all-out abortion ban" and added that she was worried the new law would push obstetricians away from practicing in Georgia.

Current state law allows abortions up to the 20th week of pregnancy.

Kemp's signing of the heartbeat bill May 7, 2019, came after weeks of protests and amid outcry for legal action against it. It was to have gone into effect in January of this year until Jones temporarily blocked in the fall and now has struck it down.

The Georgia measure also prompted a response from Hollywood long before it was signed into law.

A group of 50 celebrities, led by activist actress Alyssa Milano, signed a letter in late March 2019 declaring a boycott of the state's film industry if the bill passed.

Ashley Bratcher, lead actress in the pro-life movie "Unplanned" and native Georgian, responded in an open letter to Milano saying: "In Georgia, we care just as much about being pro-life as being pro-film. We don't believe in putting a price tag on human life."