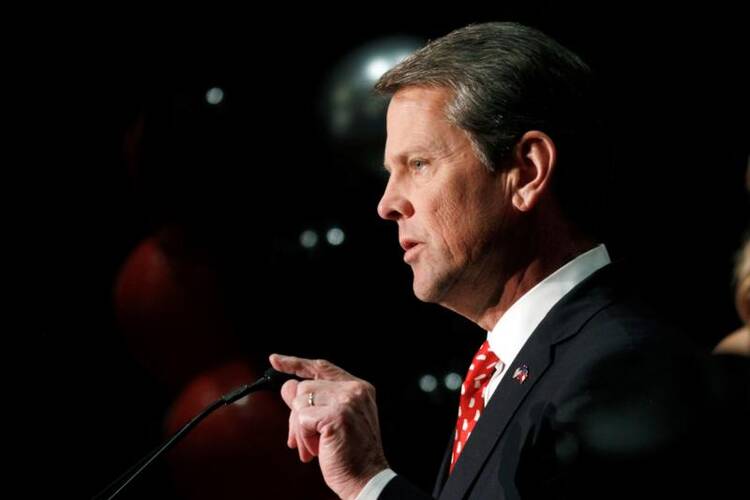 Georgia Gov. Brian Kemp, pictured in a Nov. 7, 2018, photo, has repeatedly expressed his dedication to the "heartbeat" bill, which makes abortion illegal in the state after a fetal heartbeat is detected. The Georgia House of Representatives March 29 passed H.B. 481, the "Living Infants Fairness and Equality (LIFE) Act." (CNS photo/Chris Aluka Berry, Reuters)

WASHINGTON (CNS) -- Georgia has just added itself to the list of states that aim to protect unborn life once a fetal heartbeat is detected.

The Georgia House of Representatives March 29 passed H.B. 481, entitled the "Living Infants Fairness and Equality (LIFE) Act." The House, which has remained under Republican control since 2010, got the bill through on a 92-78 vote.

The moments leading up to the vote were tense, with expert witnesses on both sides of the argument exchanging fire.

The Associated Press reported the rebuke by Georgia OB-GYN, Dr. Melissa Kottke, to the Georgia House against the bill: "It's extremely dangerous for lawmakers to presume that they're better equipped than women and their health care providers to judge what is appropriate medical care."

Retorting was Dr. Kathi Aultman, a former abortion practitioner who now does research for the pro-life Charlotte Lozier Institute. Aultman remarked that "we have convinced young women that an unplanned pregnancy is the worst thing that can happen to them and their right to reproductive freedom is more important than their baby's right to live."

The bill is now bound for the desk of Republican Gov. Brian Kemp, who has repeatedly expressed his dedication to the bill and the pro-life cause generally, relating in a tweet the same day of passage that "Georgia values life ...The legislature's bold action reaffirms our priorities and who we are as a state."

The bill, as the name suggests, prohibits abortions past the point that a fetal heartbeat is detectable in the womb, which in most cases occurs around six weeks of pregnancy.

A notable exception includes when a pregnancy is "medically futile," which is when "an unborn child has a profound and irremediable congenital or chromosomal anomaly that is incompatible with sustaining life after birth." Ostensibly then, genetic conditions such as Down syndrome where an unborn child can still survive outside the womb are not legitimate grounds for abortions under the bill.

Other special cases where abortions would be permitted are when "the pregnancy is the result of rape or incest in which an official police report has been filed" alleging such an occurrence, and when "(a) physician determines, in reasonable medical judgment, that a medical emergency exists."

"Medical emergency," for the purposes of the bill, is defined as "a condition in which an abortion is necessary in order to prevent the death of the pregnant woman or the ... irreversible physical impairment of a major bodily function."

That clause makes the bill significantly more airtight than abortion laws that sanction the procedure for the sake of a woman's "life or health," the most recent example of the latter being New York's Reproductive Health Act. The New York law is deemed by many legal experts to be one of the most permissive abortion laws in history because the "health" exception can be stretched to endorse an abortion at almost any point during a pregnancy.

Steve Aden, chief legal officer at Americans United for Life, confirmed this to Catholic News Service in a phone interview late April 1, saying "the health exception ... invokes the precedent in Doe v. Bolton," a companion case to Roe v. Wade. In that decision, "(an) exception for health can relate to anything in a woman's social, physical, or emotional health," Aden continued, saying that effectively "gives you abortion on demand."

As with other states that have passed or considered heartbeat bills, like Kentucky and Iowa, organizations such as the American Civil Liberties Union are bracing to take the fight to court should the Georgia bill receive the governor's signature.

In a statement, the ACLU of Georgia advanced the view that these kinds of bans are blatantly unconstitutional, saying "A woman's constitutional right to legal abortion has been settled law for nearly 50 years. The U.S. Supreme Court has ruled repeatedly in support of women and their right to make these decisions."

Tom McClusky, president of March for Life Action, explained to CNS that a track record of precedent isn’t always indicative of a good decision, pointing to segregation-era cases such as Plessy v. Ferguson -- upholding separate but equal public facilities -- as examples. "Just because there's bad precedent doesn't mean there can't be good future precedent," he said.

Aden also noted specifically why he believes Roe v. Wade created a poor standard: "(Roe v. Wade) was based on an arbitrary trimester framework," he claimed, only to be followed by Planned Parenthood v. Casey, which used an equally unprincipled viability standard, he said.

"If there's a discernible heartbeat, the child is likely to survive," Aden concluded.

Most abortion bans are no strangers to legal challenges, but this time the controversy heated up in Hollywood as well as Georgia.

A group of 50 progressive celebrities, led by activist actress Alyssa Milano, signed a letter declaring a boycott of the state's film industry if the bill is passed. It reads in part: "(W)e can't imagine being elected officials who had to say to their constituents, 'I enacted a law that was so evil, it chased billions of dollars out of our state's economy...' This is the precipice on which you stand."

Ashley Bratcher, lead actress in the pro-life movie "Unplanned" and native Georgian, responded in an open letter to Milano, which was published on Deadline Hollywood, addressing the celebrity "mother to mother, actress to actress."

"In Georgia, we care just as much about being pro-life as being pro-film. We don't believe in putting a price tag on human life" she wrote.

The pro-life advocacy organization Susan B. Anthony List also applauded the actions of the Legislature in the face of high-profile pressure. President Marjorie Dannenfelser said in a statement that "Georgia lawmakers courageously stood up to Hollywood bullies by sending this compassionate bill to Gov. Kemp for his signature. ... The beating heart of a vulnerable unborn child should awaken the conscience of our nation to the violence of abortion."

Pope Francis is about to visit Greece and Cyprus — and he’s expected to invite some 50 migrants to come to Rome
The pope sees his visit here as another way to get people in Europe and elsewhere to understand that the greatest humanitarian crisis since World War II requires a global solution.
Gerard O’ConnellDecember 01, 2021