Matt Malone, S.J.: The church has no need to apologize for Paycheck Protection Program loans 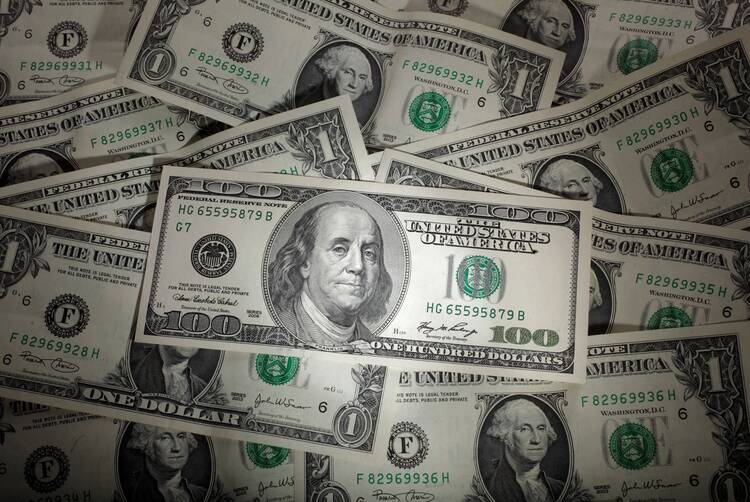 U.S. dollars are seen in this photo illustration. Catholic entities that took part in the Paycheck Protection Program said the federal emergency bridge loans translated into rapid assistance for their communities in the early months of the pandemic's economic impact. (CNS photo/Kacper Pempel, Reuters)

My late philosophy professor, W. Norris Clarke, S.J., was always telling me to “interrogate the premise” of an argument. He believed that, generally speaking, most conclusions follow logically from their premises; so if an argument is false, it is likely because one or more of its premises is false. I apply this skepticism to news stories published in America and elsewhere. This is important because reporters mostly live in a two-dimensional world. Their task is to record events quickly by reducing complex phenomena to their simplest formulation.

The problem with that approach is that it can distort the very reality reporters are seeking to make clear. A good example is a news story published by The Associated Press on July 10. The lead paragraph was as follows:

The U.S. Roman Catholic Church used a special and unprecedented exemption from federal rules to amass at least $1.4 billion in taxpayer-backed coronavirus aid, with many millions going to dioceses that have paid huge settlements or sought bankruptcy protection because of clergy sexual abuse cover-ups.

The first claim is true. The Catholic Church received (“amassed” is a loaded word) somewhere between $1.4 billion and $3.5 billon in federal funds under the Paycheck Protection Program, the federal initiative designed to mitigate the economic impact of the Covid-19 pandemic. Ordinarily, businesses that employ more than 500 people and all faith-based organizations are not eligible for federal, small business loans. In this instance, however, Congress and the Trump administration waived those rules.

The unspoken premise of the A.P. claim is that the church may have been undeserving of paycheck protection funds because it had settled lawsuits

The A.P. story also states that the money went to “dioceses that have paid huge settlements or sought bankruptcy protection because of clergy sexual abuse cover-ups.” This is also true. But how, exactly, is it relevant? These federal funds were distributed to every kind of small business, without consideration for whether they had settled lawsuits related to sexual abuse, or environmental damage, or negligence or malpractice. The unspoken premise of the A.P. claim is that the church may have been undeserving of paycheck protection funds because it had settled lawsuits. Yet no other industry was subjected to such a test.

The A.P. story is correct to point out that religious institutions sought and won an exemption from the rule that companies with more than 500 employees are ineligible. The story characterizes this exemption as “preferential treatment,” which sounds terribly unfair. Yet the unasked question in the story is whether it would have been fair to exclude the church because of the 500-employee rule. The church in the United States is not a monolith. It is a network of affiliated but legally and financially independent institutions. There isn’t a parish in the country that employs more than 500 people on its pastoral staff; and it is the parish, not the diocese, that has to make payroll for the parish staff each month.

For the record, America Media applied for and was approved for a Paycheck Protection loan. We applied as an independent non-profit corporation and not through the Archdiocese of New York. We were approved for a $314,000 loan. This offsets the revenue we have lost due to the cancelation of programs and allows us to continue to support our employees.

America Media will not apologize for joining thousands of other small businesses in seizing this opportunity. This event constituted a national emergency, which was also a family emergency for every one of our workers. Likewise, the church in the United States has no need to apologize, regardless of what The Associated Press implies to the contrary.