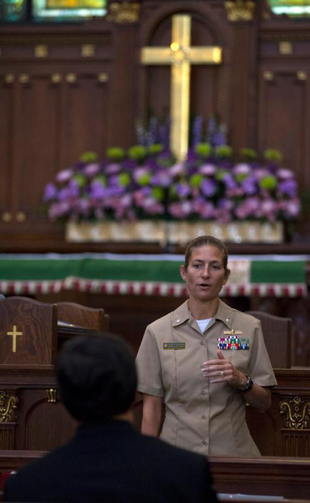 In this 2015 file photo, Navy Cmdr. Tracie Severson at the U.S. Naval Academy in Annapolis, Md., tells a group of priests how military chaplains have impacted her life. (CNS photo/Chaz Muth)

WASHINGTON (CNS) -- A prohibition by some U.S. Navy commands against active service members participating in off-base indoor religious services over coronavirus fears has now been revised, allowing attendance at places of worship where congregants can maintain social distance and wear face coverings.

But when the head of the U.S. Archdiocese for the Military Services first learned of it, he called the policy "particularly odious to Catholics."

"Frequently there is no longer a Catholic program on naval installations due to budgetary constraints or many installation chapels are still closed -- even though many of them could well ensure appropriate social distancing" to protect worshippers from the coronavirus, Archbishop Timothy P. Broglio said.

"Participation in the Sunday Eucharist is life blood for Catholics," he said. "It is the source and summit of our lives and allows us to receive the body and blood of the Lord."

The archbishop made the comments in a July 5 statement, noting that after some of the faithful in the archdiocese had brought the policy to his attention, he "immediately contacted the Navy Chief of Chaplains' Office, which was unable "to offer any relief from these provisions." "My attempt to contact the chief of naval operations has not even been acknowledged," he added.

On July 9, the First Liberty Institute announced the Navy had revised the policy. The Texas-based nonprofit legal organization that handles religious liberty cases said the change came a few days after it sent a letter on behalf of Air Force Maj. Daniel Schultz, currently assigned to a Navy command, asking the U.S. Navy to grant an accommodation so he could attend the church where he leads worship.

Acting Undersecretary of the Navy Gregory J. Slavonic issued a memo July 8 saying that none of the priorities set by the Department of Defense for protecting service members from the spread of COVID-19 including "measured activities" that commanders must consider "should be construed to restrict attendance at places of worship where attendees are able to appropriately apply (coronavirus) transmission mitigation measures, specifically social distancing and use of face covering."

In his July 5 statement, Archbishop Broglio noted that Catholic churches -- "and I presume others" -- have gone to great lengths to ensure social distancing in seating and receiving holy Communion and have even adjusted the liturgy "to avoid any contagion."

"I wonder why the Navy has decided to prohibit the faithful from something, which even the commander in chief has called an essential service," he added.

"I want to assure the Navy Catholic faithful of my prayerful solidarity, invite them to continue to participate in Masses that are broadcast or livestreamed, and to be fervent in their faith," he said, and rightly predicted "this situation will pass."

"As Pope Francis reminded us, Christ is in the boat with us," he said.

In a statement reacting to the Navy changing the policy, First Liberty Institute general counsel Mike Berry said: "We are grateful to and Navy leadership for righting this ship, and to Commander-in-Chief (President Donald) Trump for making religious liberty a priority. This is a major victory for the Constitution and for religious freedom within our military."

Berry added that Slavonic's memo "means tens of thousands of our brave service members will be able to safely and freely exercise their religious beliefs."