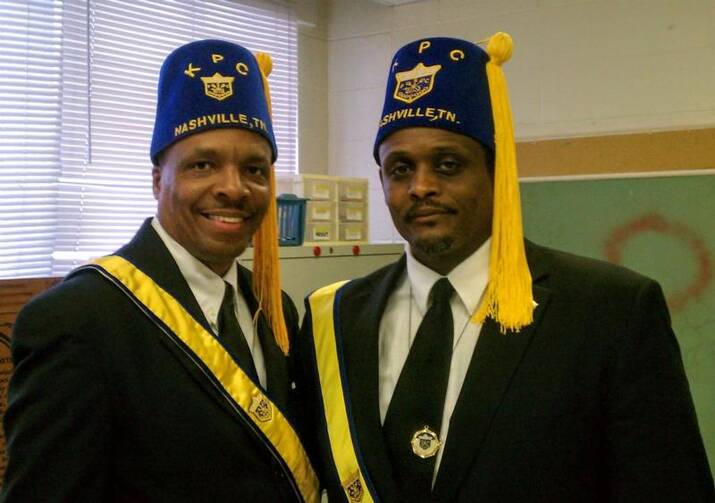 NASHVILLE, Tenn. (CNS) -- Marching through the streets of downtown Nashville with thousands of others standing up for racial justice and demanding change was a "spiritual experience" for St. Vincent de Paul parishioner William T. Robinson Jr., an African American and a lifelong educator and activist.

Robinson has seen his community struggle for too long, but at this moment, he feels hopeful. "This feels real," he said. "The diversity of people coming together for the common good … the empathy is there, people are invested in this."

"To everything there is a season," Robinson said. "This is the season for change."

Robinson's friend, fellow St. Vincent parishioner and brother Knight of Peter Claver, James E. Callahan III, also participated in a Black Lives Matter march and rally held in June in Nashville. He described the need for the march as "tiresome," as he named a litany of Black men unjustly killed, from George Floyd to Emmitt Till.

But now, "there's a very strong tenor of hope, looking at the other groups coming in," Callahan said. "When our Caucasian brothers and sisters say, 'Hey, we don't agree with this,' that's when you start to get real movement."

"This moment is really the boiling point," said A. Hannibal Leach, a professor of political science at Fisk University and a Catholic convert. The killing of Floyd, an unarmed African American man, by a white Minneapolis police officer, "forced America to gut-check itself."

The systemic racism that has plagued America since its founding "isn't something to be swept under the rug any longer," Leach said.

Like Robinson and Callahan, Leach feels hopeful that real change will spring forth from this moment.

"I see political and religious leaders more open to speaking about complex, nuanced issues surrounding race, more than I've seen in a long time, and that's good," he told the Tennessee Register, newspaper of the Nashville Diocese.

"We've seen the Catholic Church step up, and not shrink back," Leach said, praising Pope Francis and Washington Archbishop Wilton D. Gregory, in particular, as outspoken voices against racism.

"Scripture calls for the promotion of life. If you're a faithful person, you're called to be a guardian of human life," Leach said. He pointed to Christian leaders including the Rev. Martin Luther King Jr., Baptist minister Will Campbell, and St. Oscar Romero as those "standing with the people, bringing the Gospel of life into reality."

Callahan, a lifelong "unapologetic Catholic," who attended predominately white Catholic schools growing up and described his younger self as "a choir boy with a dashiki and braids," has always felt called to stand up for life, especially the lives of marginalized people of color.

As a member of the national executive board of the Knights of Peter Claver, Callahan works to promote the dignity of Black life, from conception to natural death.

"Being Black you are marginalized before birth," he said, noting the high abortion rates among African American women. And Black households languish at the lowest rung of the economic ladder, without equal opportunities for advancement, Callahan said. Black men have a higher rate of death through street violence, as well as inside the judicial system, he said, dying in prison or executed by the state. "That's not a natural death," he said.

That's why Callahan is marching in the streets and dialoguing with people, engaging in the uncomfortable, but necessary, conversations about race.

Leach encourages Catholic laypeople to more fully immerse themselves in the social teaching and mission of the church, "ensuring that historically deprived communities have access to things like quality education and health care, good, living wages, housing."

To better comprehend the history of the African American struggle, Leach suggested visiting historic sites such as the Legacy Museum in Montgomery, Alabama, which explores the history of slavery, lynching and racial segregation in the United States.

"Try to understand how racism has impacted communities of color for generations," Leach said. Encountering that history, "you can appreciate the progress, but recognize the steps that are still necessary to take" to achieve true equality, Leach said.

"See where communities of color are coming from when we talk about systemic racism," he said. "It's embedded in political attitudes and social conventions of everyday life."

The status quo thinking "that Black people are less," are unfairly profiled, and are not given equal opportunities to white peers, must be disrupted, Callahan said.

While it's easy for most individuals to truthfully say that they didn't cause systemic racism, people have a harder time seeing how their white privilege has benefited them.

"Go to a bank and your loan approval rate is three times that of an African American with the exact same financial profile. Those are the harder things to see," Callahan said.

Witnessing more people acknowledge their privilege has been affirming, Callahan and Leach agreed. "It's good to see white allies and friends speak to those realities," Leach said, which is a step towards building a more just and inclusive society.

"Christ was against excluding people," Leach said, noting Jesus' encounters with prostitutes, lepers and tax collectors described in the bible. "We're called to follow his example. In times of darkness, the example of the faithful is to bring the light of Christ to these types of situations."

"The greatest challenge of privilege is seeing it from a different person's perspective," Callahan said. "Even if it's not impacting you, it is impacting another person, another human being, a child of God. Once you accept that, you have to get involved," he said, and can no longer remain a "silent witness."

"As a Christian, you always have the responsibility to speak out against injustice, racism, discrimination," Robinson said. "Evil prevails when good people do nothing."

Theresa Laurence - Catholic News Service
@openpublish
Provide feedback on this article
Join the conversation: Login or create an account
Before you can comment, you need to update your profile to include your first and last name, as required in our comments policy. Then reload this page and you'll be set up for commenting. Update your profile