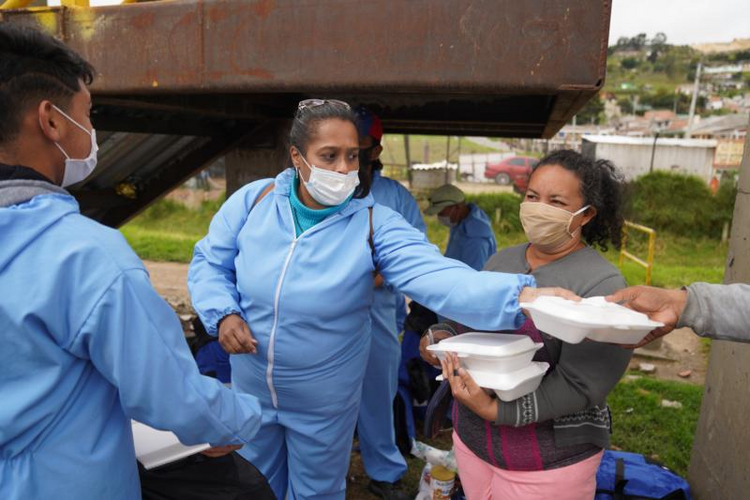 Alba Rada, a member of the Focolare movement, provides hot meals to Venezuelan migrants on a road leading out of Tocancipa, Colombia, June 28, 2020. (CNS photo/Manuel Rueda)

TOCANCIPA, Colombia (CNS) -- When Alba Rada arrived in Colombia, members of the Focolare movement gave her a warm welcome, got her kids in school and helped her with housing until she found a place to rent.

Now the 44-year-old Venezuelan immigrant replicates that kindness through a nonprofit that is helping more than 200 Venezuelans who live in Tocancipa -- and many more who pass through a highway that crosses the town.

"We know what it's like to go through tough times and face an uncertain future," said Rada, who arrived in Colombia six years ago.

"So we like coming out here to provide material and emotional support," she said, as she handed out hot meals to a group of migrants that had been on the road for days.

Rada set up her nonprofit, the Radaber Foundation, in 2018 as thousands of Venezuelans left their crisis-wracked nation and headed to neighboring countries like Colombia in search for work. With their savings depleted by hyperinflation, many were forced to walk and hitchhike for hundreds of miles toward their destinations, passing through small towns like Tocancipa.

"We started to help these hitchhikers with food and by finding people who would host them for a night or two," Rada explained. "It started as a WhatsApp group, and eventually we became a more formal organization."

The group is made up mostly of Venezuelan immigrants who want to help recent arrivals. Some of the volunteers are also members of the Focolare movement, a Catholic lay group that promotes the ideals of unity and universal brotherhood and operates in dozens of countries.

Rada is a lifelong member of Focolare and ended up in Tocancipa largely because of her ties to that group.

The town in central Colombia only has 35,000 people, but its home to a large Focolare center that includes a school, a house for consecrated members, and a space for spiritual retreats.

"At first I only thought of guerrillas and drug trafficking when Colombia was mentioned," Rada said. "But my sister convinced me to give it a try. She told me the movement was here and that there was a school for the kids."

Rada ran a graphic design company in Venezuela and had been looking for a way out of the country for some time. She was pushed to make the move in 2014 after her car was stolen from her at gunpoint, while her children were in the back seat.

In Tocancipa, members of the Focolare movement helped her to settle down, securing a place for her two children at the movement's school, and holding a dinner party, where they donated electrical appliances to her family.

With her accounting skills, Rada also landed an administrative job at the Focolare school and made contacts that would later help her with donations for her nonprofit.

Now the Radaber Foundation is focusing mostly on helping Venezuelan migrants to deal with the economic impact of the COVID-19 pandemic.

Thousands of people have lost their jobs in Colombia as the government imposed a national lockdown to slow down the virus.

In Tocancipa and the surrounding area, Rada's nonprofit has provided food packages to more than 200 families that have lost their income during the pandemic.

It is also helping migrants who are now trying to head back to Venezuela after losing their jobs and not being able to pay rent.

More than 70,000 Venezuelan migrants have returned to their country since the pandemic broke out, according to the Colombian government. Many are doing so on foot, because they cannot afford bus fare.

On a recent weekend, Rada and half dozen volunteers gathered below a pedestrian bridge that crosses the main highway leading out of Tocancipa.

They handed out sleeping bags, snacks, sunblock and toilet paper to migrants who were making the long trek back home.

"I was doing well in Colombia," said Jose Luis Sanchez, a 54-year-old taxi driver from Venezuela, who had found work at a plastics factory in Bogota. "But my factory shut down and I had no more money to pay rent." Sanchez was walking back to Venezuela with this wife and figured the journey to the border would take him about two weeks.

Another migrant, Luisiana Cordoba, said she was coming from Ecuador, where she had been working as a dental assistant. The dentist closed her practice due to the pandemic, leaving Cordoba jobless.

"I'm travelling with my kids, so people have been more friendly and we've gotten several rides," said Cordoba, who had three small children with her. "Along the road we've been sleeping at bus terminals or under shopfronts to avoid the rain."

Rada said her organization is trying to make the perilous journey back to Venezuela safer by giving migrants orientation and advice on the risks ahead.

She said that while funding for her organization is sometimes scarce, she is motivated by the expressions of gratitude from the people she helps and by a biblical passage that was sent to her years ago in a letter written by the founder of the Focolare movement.

"There is more joy in giving than in receiving," the passage said.

Provide feedback on this article
Join the conversation: Login or create an account
Before you can comment, you need to update your profile to include your first and last name, as required in our comments policy. Then reload this page and you'll be set up for commenting. Update your profile
Advertisement
More: Latin America / Humanitarian Aid