The pandemic and Black Lives Matter protests have shown that Americans still care about the common good. Do our civic leaders? 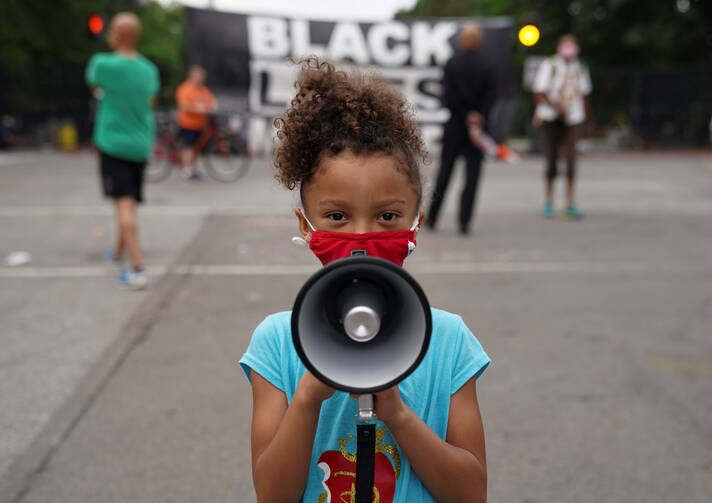 Mischa, 6, from Maryland, holds a bullhorn in front of a "Black Lives Matter" protest sign near the White House in Washington June 10, 2020. (CNS photo/Kevin Lamarque, Reuters)

The conventional wisdom goes something like this: The foundations of American civic life are buckling. Polarization drives our national life, from cable news to the lecture halls to the conversations at Thanksgiving dinner. Trust in nearly every institution, government, the media and religion has plummeted. In a certain light, it seems as if Americans have given up on the idea of a common project or the common good.

Yet the events of 2020 have revealed that even in the face of concurrent political, economic and public health emergencies, the American people still have deep reservoirs of patience, prudence and concern for the commonweal.

The events of 2020 have revealed that even in the face of concurrent political, economic and public health emergencies, the American people still have deep reservoirs of patience, prudence and concern for the commonweal.

The coronavirus continues to deal a heavy blow. More than 100,000 of our neighbors have died. We have lost family, friends, millions of jobs, along with the normal order and sacred rituals that organize our responses to moments of hardship and loss. Life as we knew it has effectively ground to a halt. And that has required us to temper our individual actions (even if in vastly varying degrees) for the health and safety of all.

Some of these measures were imposed by the power of the state, but individual Americans were taking precautions seriously before they were legally obligated to do so. A poll in March found that 90 percent of Americans had ceased going out and had started to practice social distancing. GPS data from Cuebiq, a private data company, confirmed that in every state, Americans were staying home before stay-at-home orders were issued. We will need this spirit of sacrifice again when the epidemic spikes or returns in a second wave.

If widespread compliance with stay-at-home orders—despite the cost to livelihoods and mental health—evinced a latent commitment to the common good, the mostly peaceful responses to the killing of George Floyd have also called forth our better national instincts, as Americans were again reminded of the plight of those who have been denied prosperity and justice for far too long. While the proper balance between social distancing and protesting was not immediately clear, the widespread use of masks in the protests made it clear that Americans were concerned about both, but many judged that the need for justice was urgent enough to require immediate response.

In a letter to America in the days following the assassination of Dr. Martin Luther King Jr., Jeane Joseph Daly, C.S.J., of St. Louis, expressed her hope that “the example of his life and the shock of its tragic ending [would] summon all white Americans to join our black brothers in completing the work he was not permitted to finish.” Tragically, many white Americans did not heed the call—not then, nor even after the deaths of Trayvon Martin, Michael Brown, Sandra Bland and so many others.

In the wake of the killing of George Floyd, there are signs of a new solidarity.

Yet in the wake of the killing of George Floyd, there are signs of a new solidarity. Canvassing by researchers shows that there are significant numbers of white men and women among the protesters marching throughout the country. Citizens are organizing to demand greater accountability from corporations and public figures, as well as meaningful action instead of the customary posturing on social media and through public statements. Books opposing racism have shot to the top of best-seller lists; and documentaries like “13th,” released in 2016 and directed by Ava DuVernay, are among Netflix’s most-streamed offerings.

Just as the pandemic requires our continued vigilance, we must maintain the momentum toward social and political change. Bob Moses, an icon of the 1960s civil rights movement, recently told The New York Times that George Floyd’s murder “has opened up a crevasse, so to speak, through which all this history is pouring, like the Mississippi River onto the Delta. It’s pouring into all the streams of TV, cable news, social media…. And the question is, can the country handle it?” Mr. Moses concluded soberly, “We don’t know…. [The United States] can lurch backward as quickly as it can lurch forward.”

Just as the pandemic requires our continued vigilance, we must maintain the momentum toward social and political change.

If the pandemic and the swell of protests have shown that Americans are still capable of heeding the call of their better angels, it has also exposed the flaws and deficiencies of our political leadership.

As St. John XXIII pointed out in his encyclical “Mater et Magistra,” individual citizens and the state “must work together in harmony, and their respective efforts must be proportioned to the needs of the common good.” But when individual citizens fulfill their end of the bargain while “the good offices of the state are lacking or deficient, incurable disorder ensues: in particular, the unscrupulous exploitation of the weak by the strong.”

To be sure, there have been a few profiles in courage throughout these days, leaders like Dr. Anthony S. Fauci, who has led the federal response to the pandemic, and Keisha Lance Bottoms, the mayor of Atlanta, who has rallied her city to the standard of justice and public order. But there are too few examples of such leadership. President Trump seems incapable of viewing events through any lens save that of how it might affect his own political survival. But the crisis also extends beyond the White House gates.

Our leaders were given early warnings and ample time to address the coronavirus. Yet their actions were often too timid and too late to save more lives. Sustained protests against racism have rallied widespread public support for substantive reforms to policing and the criminal justice system. Yet some of our political leaders seem content to wait for this moment to pass, anticipating, perhaps, a return to the status quo.

The country will not return to the status quo, nor should any American wish for it to do so.

But the country will not return to the status quo, nor should any American wish for it to do so. The world has been changed by these events, and we are only beginning to grasp fully the implications. More dramatic change is surely coming. If that change is to be positive and far-reaching, then the country will need civic leaders who embody the selfless spirit and true concern for the common good that its people have thus far amply demonstrated.