The nation needs to mourn what—and who—have been lost. 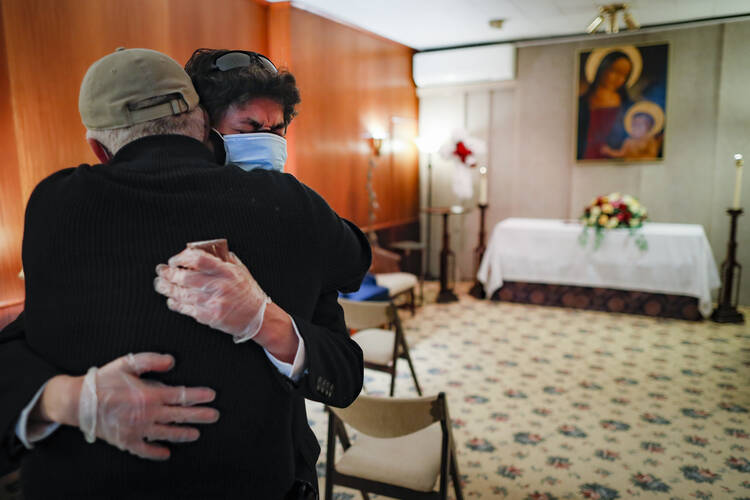 Leonardo Cabaña cries in the arms of his friend Raphael Benevides beside the casket of his father, Héctor Miguel Cabaña, who died of Covid-19, before a funeral home service in the Brooklyn borough of New York. (AP Photo/John Minchillo)

As we write, nearly 100,000 Americans have died from Covid-19. Millions more have joined the ranks of the unemployed. Not one of us has escaped this pandemic without having our lives radically changed. Across the country there is a profound grief, whether for a lost loved one or a loss of the way things were.

As the country begins to decide how to most prudently restart life after months of stay-at-home orders, we should not forget to mourn. We need to set aside a time to grieve collectively. That will require ritual.

How and when to develop these rituals is not obvious. It is difficult to begin the process of grieving when the beginning, middle and end are never clear and are changing daily. And while parts of the country have begun to reopen, we are a long way from being able to gather en masse in public spaces for more traditional vigils.

The president of the United States should be well positioned to lead a nation through a grieving process. Thus far, however, he has shown neither the aptitude nor the empathy that is needed for such leadership. Nevertheless, there are still many outlets and institutions available to guide the country through a collective mourning.

We have a few examples of what a national day of mourning might look like. On May 14, Pope Francis called for a world day of interreligious prayer and fasting to ask God to stop the pandemic. The U.S. bishops and other religious leaders could pursue a similar day of collective prayer.

Given that high school seniors across the country will be missing proms and graduations—valuable rituals themselves—LeBron James, former president Barack Obama and a number of celebrities put together a national broadcast, “#GraduateTogether,” to mark that milestone. As important as commencement addresses are, we also need eulogies.

But it will not be enough to mourn separately. Mourning is a time when community is most needed, and video conferences and livestreams more often than not remind us of our isolation instead of bringing us together.

When this is all over, we will need to gather—together—in churches, stadiums and concert halls. And whether the presider is a priest, politician or point guard, we will need public prayers and moments of silence to mourn and honor what—and who—have been lost.