Priests are on front lines of COVID-19 as they minister to the sick, dying

Priests are on front lines of COVID-19 as they minister to the sick, dying 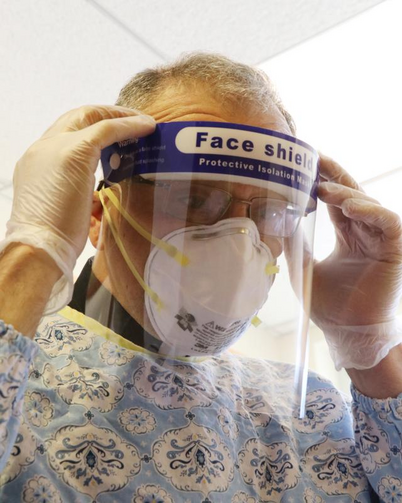 PROVIDENCE, R.I. (CNS) -- Arriving in the early evening at Fatima Hospital, Father Richard Narciso -- his anxiety level already raised due to the circumstances -- listened intently as Gloria, the nurse assigned to guide him, detailed the procedures he would need to follow to mitigate his risk of falling prey to COVID-19, the same illness afflicting the patient he had arrived to anoint.

Although the pastor of St. Robert Bellarmine Parish in Providence has eased the passing of countless sick and dying throughout his ministry in offering the sacrament of the anointing of the sick, he had never encountered such a tense visit to a patient on their deathbed.

He had received a call late that afternoon from the hospital asking that the woman's daughter had requested -- if possible -- that their loved one receive the sacrament.

After being outfitted by the nurses with the same safety gear available for their use when treating COVID-19 patients, including a protective suit encapsulating a self-contained powered air-purifying respirator unit, and reviewing the instructions in his mind on precisely how to enter and leave the room, he was led to the patient's room.

"Once I entered the unit, my knowledge and understanding of the severity and seriousness of this public health crisis was deepened tenfold," Father Narciso told the Rhode Island Catholic, Providence's diocesan newspaper.

He was taken aback at first by the unit full of health care workers covered from head to toe in gowns, gloves, shoe coverings, hair coverings, masks and face shields, all working in the midst of what looked like a scene from a science fiction film.

"Yet in the midst of all this, I can assure you that Christ himself was present to so many in need," Father Narciso said.

Vested in the full armor of personal protective equipment, he hesitated at the door of the room for a moment.

Stepping through, his thoughts transformed from following the safety procedures required to enter the unsafe environment to the "Hymn of Praise" often sung during Mass.

At that moment, as was the case that day for health care workers around the world, he too was standing face to face with the ravages of COVID-19.

With his double-gloved hands, Father Narciso laid his palms upon the older woman's head in prayer before anointing her forehead and hands with a cotton ball with the oil of the sick.

He prayed that her eyes may have been opened to the presence of Christ in their midst and her heart may have burned with desire to see God face to face in the heavenly kingdom.

With that, his mind turned back to the instructions the nurses outside the room had given him.

He carefully removed one pair of gloves, before opening the door and exiting the room.

He marveled at the caring and compassion expressed by the team of nurses for their patients, including Gloria, who guided his safety every step of the way.

"Even after the anointing, in the midst of all that she had to do for her patients, she continued to be the loving, caring and generous presence of the risen Christ to me," he said in awe.

His work in anointing the sick that day was not yet done, however.

Earlier, to keep a brother priest from also putting himself into harm's way by risk of exposure to the coronavirus, Father Narciso volunteered to answer his call as well to anoint a hospitalized parishioner with the oil of the sick.

Father Narciso is one of many priests from across the Diocese of Providence who minister to the sick and dying in hospitals, nursing homes, palliative care and other facilities.

The level of access health care facilities have granted to chaplains ministering to the sick and dying has varied, with most bedside visits disallowed altogether at the height of the pandemic out of extreme caution to prevent the virus from spreading further among the general population.

As the COVID-19 pandemic has unfolded locally over the past three months, Father Albert Ranallo, coordinator for Pastoral Care for Health Facilities in the Diocese of Providence, has assembled a group of 17 priests who, in addition to their regular ministry to the sick and dying, will be positioned, with additional training, to respond should another peak of cases develop which would overwhelm beds at hospitals and other care centers.

"We want to have designated priests deal with the COVID patients," said Father Ranallo, whose responsibilities as coordinator include overseeing hospitals, nursing homes, assisted living facilities, hospices and other care facilities.

"Local pastors might start getting the calls, but they may not be able to go because of medical conditions or their age or any other reason," he said.

To keep hospitals and their resources from being overtaxed should another spike in positive cases develop locally, some of the less severe cases may be diverted to alternative sites or field hospitals for treatment, while other patients facing an uncertain road to recovery may be sent to any of eight area hospice organizations for end-of-life care.

The priests are on a mission to ensure that all who are sick or dying are able to receive the sacrament of anointing of the sick.

"We're designating priests in the eventuality of those situations developing," Father Ranallo said. "We know we're still going to get called to visit the sick at home, so we have to gear up for that eventuality too."

For these spiritual first responders, like their medical counterparts, the biggest challenge has been securing enough personal protective equipment, or PPE, to mitigate to the greatest extent possible the health risk involved when a priest enters the room of a patient who could be infected with the novel coronavirus.

"Even if it's non-COVID patients, we still have to be careful of what we're going to be exposed to in the home," Father Ranallo said.

Starting with just one box of latex gloves and nine N95 masks to protect the group of priests volunteering for this ministry, Father Ranallo has worked to gather additional gowns, gloves and masks. He gathered the priests together online for a Zoom training led by a nurse from Hope Hospice on the proper methods for donning and doffing the gear.

"You have to be attentive to the medical staff," he said, when priests go into facilities to anoint the sick and dying.

"You have to be very careful how you put on the PPE. They walk you through the protocol for putting on the PPE, what goes on first, second and third. You want to make sure it's secured."

Provide feedback on this article
Join the conversation: Login or create an account
Before you can comment, you need to update your profile to include your first and last name, as required in our comments policy. Then reload this page and you'll be set up for commenting. Update your profile
Advertisement
More: Coronavirus / Sacraments / Death and Dying