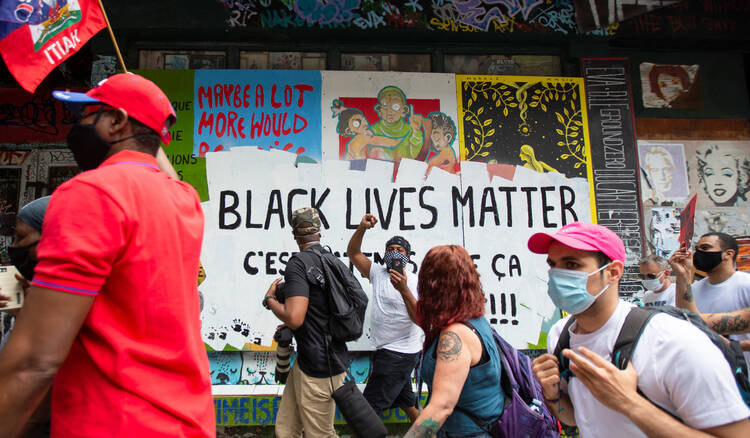 People march during a protest against racial inequality and police brutality in Montreal on June 7. (CNS photo/Christinne Muschi, Reuters)

The death of George Floyd at the hands of Minneapolis police has sparked demonstrations, rallies, riots and more, not only in the United States but around the world. In Canada, thousands gathered across the country, from large urban centers like Toronto, Montreal and Vancouver to small towns like Innisfail, Alberta, and Dawson City, Yukon. Demonstrators filled the streets in solidarity with others in the United States but also in protest against racial discrimination and police violence against black and indigenous people in Canada.

“I think the church needs to be right there, and Catholic people should feel called to participate in these demonstrations and to learn from them,” said Peter Bisson, S.J., assistant to the Jesuit Provincial of Canada for Indigenous Relations.

“I was at the demonstrations in Ottawa on June 5. That was a powerful experience, especially to have everybody kneel for 8 minutes and 46 seconds,” the length of time Mr. Floyd was suffocated by an officer kneeling on his neck. “Everybody dropped down to their knees; no one objected or hesitated.”

Demonstrations in Ottawa and other communities protested Floyd’s killing, but they also called attention to the death of Regis Korchinski-Paquet, a 29-year-old Indigenous-Black Canadian woman who, alone in the presence of police, fell to her death from a Toronto high rise on May 27.

Peter Bisson, S.J.: “I think the church needs to be right there, and Catholic people should feel called to participate in these demonstrations and to learn from them.”

Police were initially called by Ms. Korchinski-Paquet’s mother, who asked them to take her daughter to a mental health facility. Ontario’s Special Investigations Unit is investigating the incident.

The demonstrations confront Canada with its own history and habits of racism, which can be overshadowed by so much news about racism in the United States. Catholics are reflecting on what this means for the church.

Obinna Ifeanyi, C.S.s.P., a teacher and chaplain for the Toronto Catholic District School Board, said that it is important to recognize that racism is not a problem unique to the United States but a “global plague.”

“As an educator and a priest, I must say that the two institutions that I belong to, church and school, do not exist in isolation but are microcosms of the larger society,” Father Ifeanyi said. “So, what you find in society, you find in them. Based on that, I will say that there is racism in the church, in schools and everywhere. Since this unconscious bias has been institutionalized for years, it is going to take a lot of work for everyone to unlearn what they have learned.”

“Canadians just don’t see it, and it’s right in front of their noses,” said Mary, a Catholic woman from Kenya who lived in the United States for many years before moving to Canada a decade ago. She preferred not to give her full name because of her own experiences of racism in Toronto.

“Canadians just don’t see it, and it’s right in front of their noses,” said Mary, a Catholic woman from Kenya.

Mary said she does not see many Catholics participating in demonstrations against racism, but she wishes she did. “The Catholicism I grew up with in Kenya tends to be very progressive in terms of social issues,” she said. “The Canadian Catholic Church tends to be very quiet, and it makes me sad because I’ve always thought that, as opposed to [some Protestant denominations], the Catholic Church has always been big on social issues, justice, taking care of people’s everyday needs, not just going to heaven.”

Some Catholic leaders have spoken out. On June 8, the Canadian Conference of Catholic Bishops released a statement addressing the killing of Mr. Floyd: “We invite all Canadians to pray for all those who have lost their lives as a result of the sin of racism, to work for reconciliation and healing, as well as for peace and justice in our land and throughout the world.”

Individually, bishops across Canada have offered further thoughts, emphasizing the problem of racism in Canada. Erik Oland, S.J., provincial of the Jesuits in Canada, also wrote a statement, and Catholics like Joan Atkinson, C.S.J., have been reflecting on experiences attending demonstrations in Canada.

But Mary said she does not hear about bishops’ statements or these examples in her own experience as a Catholic. “Maybe I’m just not in the right circles; maybe other levels of the church need to push that message down to us,” she said, but in the end she said feeling like the church supports those who are struggling against racism is what counts.

Father Ifeanyi agrees that words need to have actions. “I appreciate all the communiqués from the bishops’ conference because they are truly rich, but we need to find ways to make the message available for those who sit in the pews every day.”

Two ways to do that, said Father Ifeanyi, are authentically reflecting on the diversity represented in decision-making bodies in the Catholic Church and its organizations and building strong programs for youth.

Father Bisson agreed, saying Catholics need to ask, “Who do we consult, who is on our boards, who helps us make decisions? It’s important that people who experience discrimination, marginalization, even brutality, be part of our decision-making and consultation structures.”

The Jesuits have also been trying to recruit intentionally so that the order reflects the diversity of Canada itself, according to Father Bisson. “We need to have that, if our own discernment as Jesuits will be more fully in touch with what the spirit is up to across the country,” he said.

Mary also believes that the church needs to be engaging young people and making its statements more loudly. “My kids and the younger generation, they need to hear that, to know that somebody else actually has them in mind,” she said. “I know a lot of kids who are out there, who are very vocal, but I don’t think they feel any support from the church.”

As Catholics in Canada continue to wrestle with racism, Father Ifeanyi said Catholics should reflect on their own teaching. “First, racism is both sinful and a sin,” he said, recalling James 2:9, which said that partiality is a sin. “Second, the most powerful prayer we, Catholics, pray at every moment—the sign of the cross—goes against racism. In fact, any time a Catholic raises his or her hand to do the sign of the cross, he or she is simply embracing and adopting the Trinitarian message of unity, not uniformity. Diversity, not division. That’s the beauty of our faith.”

“I hope that if our catechism has done a good job, then if there’s any religious group that should be against racism, it is Catholics,” said Father Ifeanyi. “I feel that racism will never go away but will always find ways to adapt. But I continue to remain hopeful because of the gospel. I continue to pray that one day we, the church and humanity at large, will embrace Jesus's final prayer for us: ‘Father, that they may be one.’”