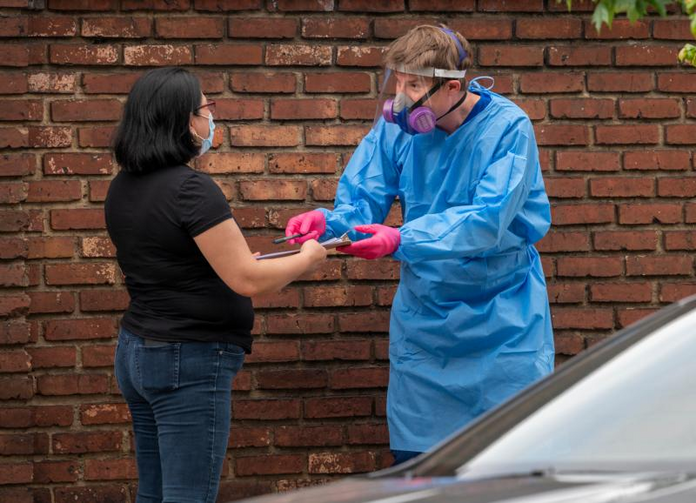 A woman fills out a form from a medical questioner prior to being tested for COVID-19 June 10, 2020, at Sacred Heart of Jesus/Sagrado Corazon de Jesus Church in Baltimore. (CNS photo/Kevin J. Parks, Catholic Review)

BALTIMORE (CNS) -- A Baltimore pastor who was recently named an auxiliary bishop for the Baltimore Archdiocese has appealed to Maryland Gov. Larry Hogan to increase free COVID-19 testing in the city to expand beyond his parish, Sacred Heart of Jesus/Sagrado Corazon de Jesus.

But even at Sacred Heart of Jesus, in Baltimore's Highlandtown neighborhood, health officials have struggled to keep up with demand as hundreds have sought testing in recent weeks. The line frequently snakes around the block of the church, but officials often have no more than 150 tests on any given day.

At least three of Bishop-designate Bruce A. Lewandowski's parishioners who unsuccessfully sought testing have died.

"We're calling on the governor to invest in the people of Baltimore with tests," said Bishop-designate Lewandowski, explaining that while capacity has improved in affluent communities, it still lags in poorer African American and Latino neighborhoods.

African Americans and Latinos in Maryland have been disproportionately affected by COVID-19, the disease caused by the coronavirus. Bishop-designate Lewandowski's parish is considered by many the heart of the Hispanic community in the Archdiocese of Baltimore.

At a June 10 news conference, he said that in a recent hearing, "the state health commissioner said anybody in the state of Maryland who wants to get tested, can get tested, and that may be true if you have insurance, if you can pay for the test. Our folks are not insured. They can't pay for the test."

According to the Maryland Health Department, Sacred Heart of Jesus' ZIP code -- 21224 -- has more than 1,000 current confirmed cases of COVID-19, the highest in the state.

The newly named bishop was joined at the news conference by several African American pastors of other Baltimore churches in hard-hit communities and by representatives from Baltimoreans United in Leadership Development, or BUILD, which is helping to administer the testing at Sacred Heart of Jesus.

"Because black and brown people in the city of Baltimore are the most affected by the virus, we need to be there in great numbers with testing, with follow up, with getting the results out quickly," Bishop-designate Lewandowski said. "I would say also investing in Baltimore is key to the recovery here economically. If we don't do this now, the economic recovery is going to lag."

Mike Ricci, a spokesman for Hogan, said the state and the city are committed to providing as many tests as needed for the Sacred Heart of Jesus site.

"The limiting factor is staffing support, and we have talked to Johns Hopkins officials to see if they can help provide more support to the site," Ricci said. "(Lt. Gov. Boyd Rutherford) and the governor's chief legislative officer, Keiffer Mitchell, have both spoken to the pastors in recent days."

Bishop-designate Lewandowski said in early June a parishioner from his church named Leo collapsed while waiting in line to be tested for COVID-19. Leo, whom he described as "a father of two teenage children, a good husband and a hard-working man," was rushed in critical condition to Johns Hopkins Bayview Medical Center. The man died June 11.

The bishop-designate noted the COVID-19 problem is more pronounced in Highlandtown for many reasons.

He said many of his infected parishioners are considered essential, working in industries such as food service, health care and construction. Some residents are immigrants who either can't afford medical care or worry that seeking medical care will call attention to their immigration status.

"In our Latino community, it's hard to social distance. I would say the key to that is we have multi-family homes," Bishop-designate Lewandowski said. "If one person gets sick, it could infect three or four families that live in the same housing complex."

On June 10, more than 50 people were already in line two hours before testing officially opened.

William Interiano, 15, came to the testing site with his family of five after he saw information about it on Instagram. He didn't have any symptoms, but he said he knew at least four people in his extended family who had become infected.

"People in the family were starting to get sick, more and more. It's a cause for concern," Interiano told the Catholic Review, the Baltimore Archdiocese's online media outlet. "I'm just taking no risks."

Provide feedback on this article
Join the conversation: Login or create an account
Before you can comment, you need to update your profile to include your first and last name, as required in our comments policy. Then reload this page and you'll be set up for commenting. Update your profile
Advertisement
More: Coronavirus / Health & Wellness / Poverty