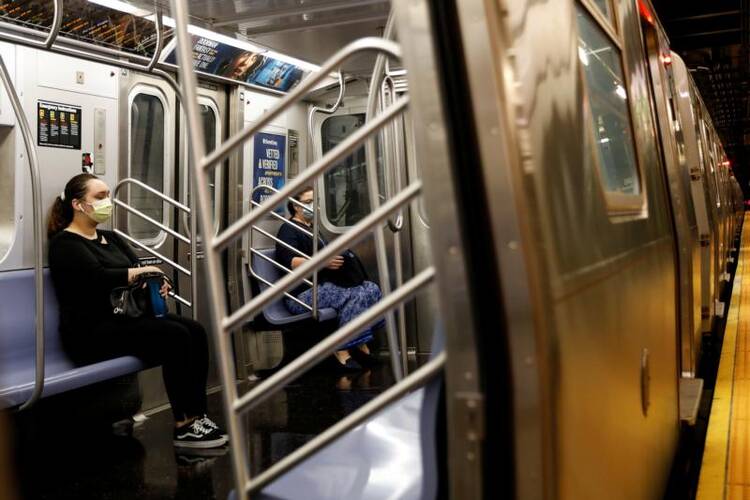 A commuter in New York City is seen on the subway June 8, 2020, during the coronavirus pandemic. The New York Archdiocese partnered June 15 with SOMOS, an immigrant doctors network, to open 52 COVID-19 test sites in churches throughout New York City. (CNS photo/Brendan McDermid, Reuters)

WASHINGTON (CNS) -- An organization whose work was praised by Pope Francis late last year has partnered with the Archdiocese of New York to offer free Covid-19 testing in predominantly Latino communities in and around New York City.

In a June 15 news release, Somos Community Care, a network of more than 2,500 medical providers in the New York City area, announced it would be offering testing for communities in Queens, the Bronx, Brooklyn and Upper Manhattan, in places disproportionately affected by the coronavirus.

In New York, which became the epicenter of the virus in the U.S. earlier this year, Covid-19 death rates among African Americans and Latinos showed the stark disparities, which the mayor of New York and the state's governor pointed out.

Pointing out the disparities, Mayor Bill de Blasio said in early April that 34% of those who died in the city because of Covid-19 were Latinos, who are 29% of the city's population, and African Americans made up 28% of the city's deaths while being 22% of the population.

The organization spoke in the release about meeting with the pope late last year and its mission to provide health care to all.

"Somos doctors, led by Dr. Ramon Tallaj, experienced a papal audience last year as Pope Francis spoke about access to health care from the Vatican as a universal right," the organization said. "So, with health care at the root of the faith's mission, 52 churches staffed by essential priests and doctors will provide Covid-19 testing to local communities and lay workers. These testing sites, operated by Somos physicians, are located in predominantly Latino communities in Queens, the Bronx, Brooklyn and Upper Manhattan."

The group promoted a symposium at the Vatican late last year focusing on "the immigrant family and its health care needs."

In the pope's greeting to the group last year, the pontiff said that "for several years now, in New York City, you have dedicated yourselves to the assistance and health care of those who live on the margins of society, in situations of poverty and hunger.

"In this way you spread the culture of encounter, where no one is discarded or pigeonholed, but all are sought out, because all are needed to reveal the Lord's face.' Your organization is distinguished by the relationship of empathy and trust that it succeeds in establishing with the sick and their families, sharing their lives and becoming closer to their culture and language, in order to foster human relations," he continued.

Tallaj, chairman and founder of the organization, said New York was experiencing "twin crises" produced by inequality and viewed the partnership with the church as "essential." In addition to the testing, the organization also has organized food distribution.

"It is our people, our communities, that are hurting the most from this virus, and houses of worship can be a haven for community members as part of our recovery process," he said. "This partnership with the Archdiocese of New York furthers our mission to care for the most vulnerable."

The group has also partnered with other faith groups in organizing similar services at a Mennonite church and African Methodist Episcopal churches. It also offers a toll-free number -- (833) Somos NY -- for those looking for testing in New York.

"We do need healing and unity in time of incredible strife and experience in our city, our country and our world. We got to refocus on our most vulnerable -- the poor, the immigrant, the sick -- as treating the sick is essential to our faith. And community doctors are the essence of that work as we try to heal and unify," Cardinal Timothy M. Dolan of New York said about the effort.

"That’s why the partnership between our Archdiocese of New York and Somos Community Care, a network of dedicated community doctors, to set up Covid-19 testing sites at dozens of Catholic parishes across the city in some of the most diverse and underserved neighborhoods is needed so much right now," the cardinal said. "This is the essence of healing, the essence of unity, the essence of community service."