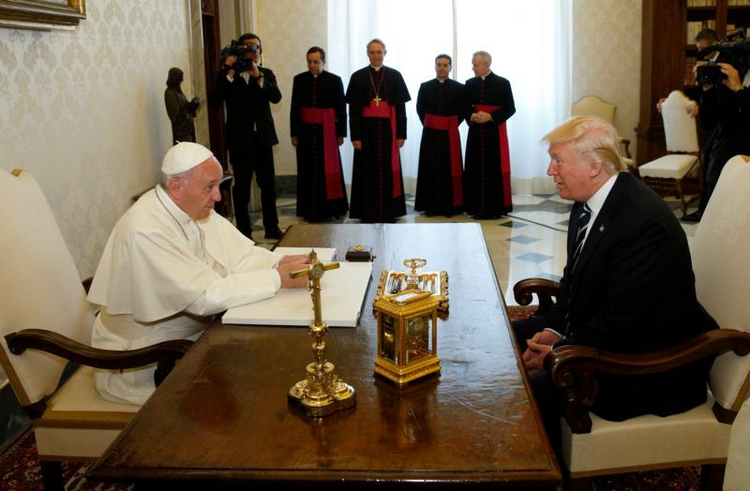 A Tennessee newspaper said Sunday it is investigating what its editor called a “horrific” full-page advertisement from a religious group that predicts a terrorist attack in Nashville next month.

The paid advertisement that appeared in Sunday's editions of The Tennessean from the group Future For America claims Donald Trump “is the final president of the USA” and features a photo of Trump and Pope Francis. It begins by claiming that a nuclear device would be detonated in Nashville and that the attack would be carried out by unspecific interests of “Islam.”

The group also ran a full-page ad in Wednesday's editions of the newspaper stating its intention to warn Nashville residents about next month's event “so that they may be able to make a decision intelligently.”

In a story on its website Sunday afternoon, The Tennessean said the ad violated the newspaper’s long-established standards banning hate speech.

“Clearly there was a breakdown in the normal processes, which call for careful scrutiny of our advertising content,” Anastasi said.

“The ad is horrific and is utterly indefensible in all circumstances. It is wrong, period, and should have never been published,” he said. “It has hurt members of our community and our own employees and that saddens me beyond belief. It is inconsistent with everything The Tennessean as an institution stands and has stood for.”

Sales executives ordered the ad to be removed from future editions, the newspaper said.

Council on Islamic-American Relations spokesman Ibrahim Hooper said in a statement Sunday that while the group appreciates that the “Islamophobic” ad was pulled and an investigation has begun, "we would urge the Tennessean to also implement updated policies and staff training to ensure that this type of hate incident does not occur in the future. CAIR is willing to offer that training.”

Why people are so attracted to apocalyptic biblical narratives
John W. Martens

Why do we find the end of the world so entertaining?
Terrance Klein

It was not immediately known how much Future for America paid for the ads. According to its website, the group's ministry warns of so-called end-of-the-world Bible prophecies whose fulfillment “is no longer future_for it is taking place before our eyes.”

Terry Heaton, who is an author and retired television news executive, including the former executive producer of “The 700 Club,” said the advertisement’s claim is not supported in the Bible.

“This idea has been debated in church circles forever, and there have been plenty of historical accounts of those who shouted that ‘the end is near,’" Heaton said. ”Obviously, nobody has been accurate, so I think it’s safe to say this is nonsense.”

Provide feedback on this article
Join the conversation: Login or create an account
Before you can comment, you need to update your profile to include your first and last name, as required in our comments policy. Then reload this page and you'll be set up for commenting. Update your profile
Advertisement
More: US Politics