Why do we find the end of the world so entertaining? 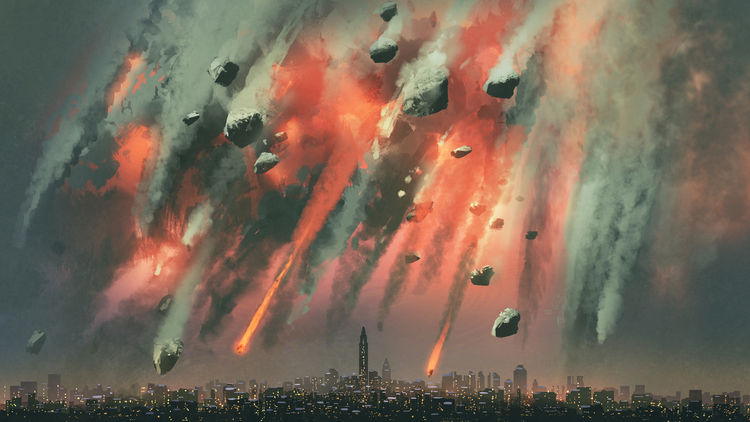 We do not really expect the world to be wiped out. At least, we don’t expect our world, the one in which we live, to end. The termination of tomorrow does not enter our daily consciousness. Today just picks up where yesterday ended.

So why are we so entertained by images of Armageddon? In this decade, almost all of the top 10 grossing films worldwide have been apocalyptic fantasies. Counting from highest-grossing down to 10th, that would be: “Avengers: Endgame,” “Star Wars: Episode VII—The Force Awakens,” “Avengers: Infinity War,” “Jurassic World,” “The Avengers,” “Furious 7,” “Avengers: Age of Ultron,” “Black Panther,” “Harry Potter and the Deathly Hallows, Part 2” and finally, “Star Wars: The Last Jedi.”

To be fair, economists note that part of what makes these movies worldwide blockbusters is their elaborate spectacles coupled with very circumscribed acting. Translate “Tootsie” into Mandarin and you lose Dustin Hoffman. You don’t really have Meryl Streep in the Vietnamese version of “Kramer vs. Kramer,” but no thespian treasure is lost when these big action blockbusters are dubbed.

In this decade, almost all of the top 10 grossing films worldwide have been apocalyptic fantasies.

Still, aren’t the very terms found in our favorite titles a bit telling? Avengers, force, endgame, infinity war, last, furious, deathly hallows, star wars and awaken. Are we attracted to these movies because we know that they will never happen, or do we love them because, somewhere deep inside of us, we do wish for something to break into our world, our routines and our society’s endless downward spiral? If the terrorists don’t get us, the mass murderers will. Or we will end our own lives, either by suicide or indirectly, with our addictions to booze, pharmaceuticals, fats and sugars. In the meantime, we wait and watch as these things happen to others.

The first Christians clearly expected the apocalypse to happen within their lifetimes. They were as weary of the world as we are. Perhaps that is why they eagerly embraced the proclamation that something truly cataclysmic had begun in an obscure eastern province of the empire. Then, as now, thoughts and fantasies turn to the apocalyptic when one grows weary of a wasted world.

The first Christians clearly expected the apocalypse to happen within their lifetimes. They were as weary of the world as we are.

Much of the world’s wisdom would suggest that the solution is simple enough. We must recognize that the world is not going anywhere and neither are we. It is all an illusion, both the progress of the world and our personal plans.

Humans do not like to ponder deeply. Pondering points back upon ourselves. It makes us uneasy, even queasy. We prefer spectacle, which stuns us, seduces us away from the self that we inhabit every day. There is a reason concerts, sporting events and apocalyptic movies make so much money. Commerce is still meeting the same need that built the Roman amphitheaters.

Science cannot tell a person how to live or why. We have to do that for each other.

When we do ponder, we are left with a choice between what I would call the dizzying and the dubiously delightful. In the first, the sad spiral never ends, though it will cast us off. For me, that is a dizzying thought, much like the expanse of the universe or the vast reaches of time. I can claim to comprehend it, but I certainly cannot conceive it.

Everything we have is temporary
Michael Simone

The other choice? Maybe the inevitability of the sad spiral is the illusion. Maybe our world, our lives are racing toward a target. If at the end, past the pain and sorrow, lie the open, loving arms first spread wide upon a cross outside Jerusalem, then our destiny is delight, not destruction.

But isn’t this delight quite dubious? Personally, I can suffer the doubtful more than the dizzying, and those are our only choices, save doping ourselves into dreamlands. Again, to speak personally, I keep noticing that the more I throw myself into the story, the more that I risk, the more fervent I become in prayer—which can be defined as an active awaiting of the apocalypse—the more I live and grow happy.

Perhaps you would prefer a scientific solution rather than a personal one. Won’t science find a way to save us? Sorry, for all its very real value, science cannot tell a person how to live or why. We have to do that for each other.

That picture of death and destruction raining down is almost an exact copy of a piece from an older JW Watchtower magazine which purported to show how God was going to kill everyone on Earth except the JWs. The picture showed a happy little (JW) family watching from a hilltop the destruction of all their (non-JW) friends and neighbors.

Oh, I don't know. Always considered them to be really scary stories like you might tell around a campfire. It just wouldn't work the same if you told an Ingmar Bergman story although... it would have the desired effect of causing great drowsiness.

1
Explainer: Cardinal Tobin will now help Pope Francis pick bishops. What does that mean for the U.S. Church?
Colleen Dulle
2
Pope Francis in Iraq: Everything you need to know about the historic trip
America Staff
3
Bishop Rhoades: Catholics can take the Johnson & Johnson vaccine ‘in good moral conscience’
Catholic News Service
4
An open letter to Joe Manchin, a pro-life Democrat and the most powerful senator in Washington
Charles C. Camosy
5
Nobody at the Vatican wants Pope Francis to go to Iraq right now. Why is he so set on going?
Inside the Vatican