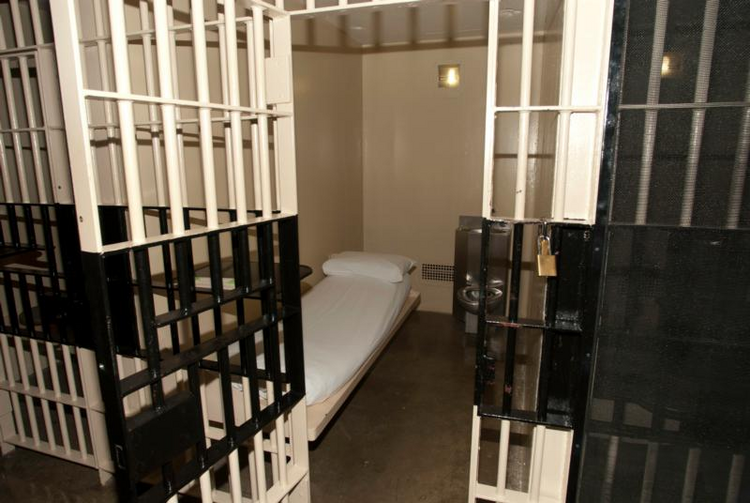 A death-row jail cell is seen at the state penitentiary in Huntsville, Texas, in this 2010 file photo. (CNS photo/Jenevieve Robbins, Texas Dept. of Criminal Justice handout via Reuters)

WASHINGTON (CNS) -- The U.S. Supreme Court granted a last-minute stay of execution for Texas death-row inmate Ruben Gutierrez June 16, saying the state prison officials need to reexamine their rule that bans clergy from being with prisoners to the execution chamber.

In the court's ruling, issued just one hour before Gutierrez's scheduled execution, Justice Samuel Alito wrote that a lower court should determine if "serious security problems would result if a prisoner facing execution is permitted to choose the spiritual adviser the prisoner wishes to have in his immediate presence during the execution."

"Spiritual comfort at the time of death is not a convenience; it's a protected legal right," said Shawn Nolan, one of Gutierrez's attorneys, in a June 16 statement where he said the Texas Department of Criminal Justice had adopted this policy last year "for its own convenience."

“Spiritual comfort at the time of death is not a convenience; it’s a protected legal right,” said Shawn Nolan, one of Gutierrez's attorneys, in a June 16 statement.

Catholic leaders have spoken out against Gutierrez's scheduled execution and they have also denounced the state prison’s rule preventing a chaplain from being with him in the death chamber.

"Denying a prisoner's request for a chaplain at the hour of his death represents an egregious rejection of the possibility of forgiveness and redemption while the state commits the violence of an execution," said Jennifer Carr Allmon, executive director of the Texas Catholic Conference of Bishops, in a statement.

The Texas Catholic Conference, the public policy arm of the state's bishops, filed an amicus brief June 12 with the U.S. Supreme Court, stating the bishops' long-standing opposition to the use of capital punishment and also emphasizing the violation of Gutierrez's religious liberty with the state's refusal to allow chaplains to accompany those being executed into the execution chamber.

A federal judge halted the execution in mid-June to review arguments on the religious policy and requests for DNA testing, but the 5th U.S. Circuit Court of Appeals overturned the ruling June 12, reinstating the execution for June 16.

Catholic leaders have spoken out against Gutierrez's scheduled execution and they have also denounced the state prison’s rule preventing a chaplain from being with him in the death chamber.

Gutierrez, now 43, was convicted in 1999 for killing an elderly woman the previous year during a home robbery in Brownsville, Texas. He has spent more than 20 years on death row and has spent the past 10 years fighting for DNA testing that he claims could prove his innocence.

Attorneys for Gutierrez, who is Catholic, appealed to Texas Gov. Greg Abbott June 15 to issue a 30-day reprieve in the case due to the dispute about a chaplain's absence, the COVID-19 threat at the prison and the urgency of DNA testing in this case.

The letter said the Huntsville prison, where the state's execution chamber is, has high rates of COVID-19 cases and expecting people to come to the prison who do not live there -- including Gutierrez's family, legal team, religious adviser and witnesses from the state -- risks further spread of the coronavirus.

If the execution moves forward as scheduled, Gutierrez will become the first person executed by the state of Texas since the coronavirus pandemic hit the U.S. in March.

Sister Helen Prejean tweeted June 15 that Texas made sure to test Gutierrez for COVID-19 before his scheduled execution but “after years of blocking DNA testing that could prove his innocence.”

Sister Helen Prejean, a Sister of St. Joseph of Medaille and a longtime opponent of the death penalty, tweeted June 15 that Texas made sure to test Gutierrez for COVID-19 before his scheduled execution but "after years of blocking DNA testing that could prove his innocence. This is our death penalty system in a nutshell. Procedure and rules are treated as more important than fairness and accuracy."

The county prosecutors have argued that in this case there may have been multiple killers, so DNA evidence that didn't match Gutierrez still wouldn't make him innocent. The appeals court agreed June 12, saying in Texas a defendant can be sentenced to death for acting as an accomplice in a capital murder.

The Texas Catholic Conference said in a statement the church has "tremendous sympathy for the family of the victim" and it didn't want to "diminish the horror" of her death or the suffering her family has endured. "Our church affirms those who commit terrible, violent crimes must be incarcerated, both as just punishment and to protect society."

The new procedure in the state that bans chaplains and ministers from the execution chamber was announced last April.

"Catholics and people of all faiths should be profoundly unsettled by Texas' willingness not only to execute Ruben Gutierrez, but also to deny him the presence of a spiritual adviser," said Krisanne Vaillancourt Murphy, executive director of Catholic Mobilizing Network, a group working to end the death penalty and promote restorative justice.

Similarly, Bishop Daniel E. Flores of Brownsville, Texas, said: "To deny a prisoner facing imminent execution access to spiritual and religious guidance and accompaniment is cruel and inhuman. It is an affront to the moral and religious dimensions of human dignity, which are clearly protected by the First Amendment to the Constitution."

In the letter to the state's governor, Gutierrez's attorneys said their client is a "devout Catholic" who feels "both a personal desire and a faith-based need to have spiritual aid during his execution."

They asked for a 30-day reprieve so the Texas Department of Criminal Justice could have time to revise its policy and "return to its long-standing practice of allowing a chaplain in the chamber."

In the letter to the state’s governor, Gutierrez’s attorneys said their client is a “devout Catholic” who feels “both a personal desire and a faith-based need to have spiritual aid during his execution.”

Last July, nearly 200 Texas faith leaders, including women religious, priests, deacons and Catholic laity, urged Texas prison officials to keep chaplains in the execution room. In an interfaith statement, they said: "Placing a wall between a prisoner and clergy violates the religious liberty that has characterized our nation since its founding."

The ban was announced just days after the U.S. Supreme Court blocked the execution of Texas death-row inmate Patrick Murphy because his Buddhist religious adviser wasn't permitted to be present.

The Texas Department of Criminal Justice said the change in its execution protocol was in direct response to the high court ruling and said it would only allow security personnel in the execution chamber in future executions.

Before it ruled on the Murphy case in Texas, the Supreme Court last year allowed the execution of Domineque Ray, an Alabama Muslim, to proceed even though Ray had appealed the state's decision to deny an imam's presence at his execution.

Justice Brett Kavanaugh -- who opposed Ray's stay of execution but supported a stay for the Texas inmate -- said Ray had not claimed unequal religious treatment under the First Amendment and his demand for an imam's presence came too late.

He said Murphy, whose execution was stayed last spring, and then stayed again last November, raised an equal-treatment claim and made his request for a Buddhist adviser's presence a month before his scheduled execution. At the time, Texas policy only allowed Christian or Muslim ministers to be present.

A trial in a Houston federal court is still pending on Murphy's case to determine if his religious rights were violated.

Two U.S. bishops called the Supreme Court's refusal to allow an imam to be present at Ray's execution "unjust treatment" that is "disturbing to people of all faiths."

Provide feedback on this article
Join the conversation: Login or create an account
Before you can comment, you need to update your profile to include your first and last name, as required in our comments policy. Then reload this page and you'll be set up for commenting. Update your profile
Advertisement
More: Death Penalty / Supreme Court