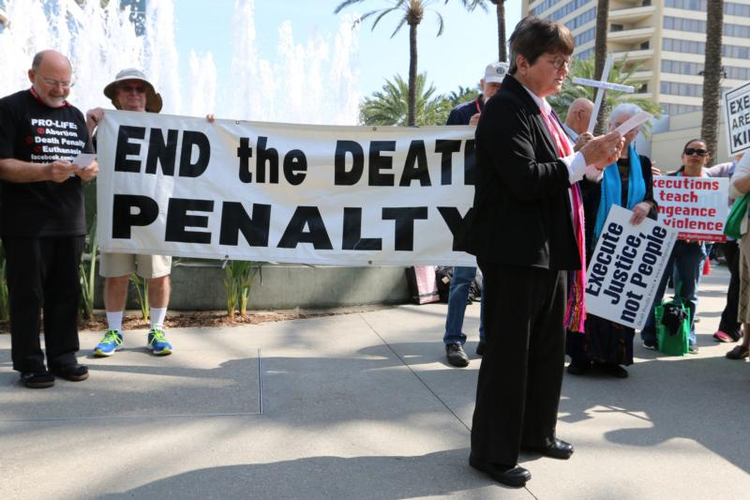 Sister Helen Prejean, a Sister of St. Joseph of Medaille, is seen in Anaheim, Calif., in this 2016 file photo. She and other opponents of the death penalty spoke out against the May 19, 2020, execution of Walter Barton in Missouri, citing evidence of his innocence. (CNS photo/J.D. Long-Garcia, The Tidings)

WASHINGTON (CNS) -- Catholic advocates against the death penalty spoke out against Missouri's May 19 execution of a death-row inmate, Walter Barton, whose death by lethal injection was the first execution to happen during the pandemic.

So far, amid the coronavirus pandemic in the United States, eight executions have been rescheduled citing concerns over COVD-19 infections.

"Our nation has gone to great lengths to save lives and prevent unnecessary loss of life during the COVID-19 crisis," said Krisanne Vaillancourt Murphy, executive director of Catholic Mobilizing Network, a group working to end the death penalty and promote restorative justice.

"It's tragically contradictory that Missouri put a man to death amidst the herculean efforts we see daily to protect life," she said in a statement, adding that his execution was "wrong-headed and unconscionable."

Sister Helen Prejean, a Sister of St. Joseph of Medaille, who is a longtime opponent of the death penalty, said in a May 18 tweet that Barton had been tried five separate times for the same crime and that "at least three of the jurors that sent him to death row now have doubts after seeing new evidence."

She said Missouri Republican Gov. Mike Parson "should stop this execution" and appoint a board of inquiry "to figure out what really happened."

She wasn't the only one asking the governor to stop this execution. Representatives of the Missouri Catholic Conference, Missourians for Alternatives to the Death Penalty and the National Association for the Advancement of Colored People delivered over 5,000 petitions, including 2,500 petitions from the Catholic Mobilizing Network, to the governor, asking Parson to stop Barton's scheduled execution.

For those on death row, redemption of souls is what matters most
Joshua Hren

On its website, the Missouri Catholic Conference, the public policy arm of the state's bishops, said Barton, who was 64, spent 26 years on death row and was confined to a wheelchair with a severe neurological disorder due to a traumatic brain injury.

It pointed out that Missouri would be the first state to move forward with an execution during the COVID-19 pandemic, even though the Missouri Department of Corrections has suspended all prison visits until June 18, and 15 states, including Ohio and Texas, have stayed, rescheduled, or granted reprieves for executions during the pandemic.

The governor said May 18 he would not stop the execution, which took place in a state prison in Bonne Terre, south of St. Louis. Strict protocols were in place to protect workers and visitors from exposure to the coronavirus. People who entered the prison had their temperatures checked and face masks were required.

Barton was convicted in 1991 for fatally stabbing an 81-year-old woman. His execution was delayed for years because of appeals, mistrials and two overturned convictions. Appeals were rejected during Barton's final days. A federal appeals court May 17 overturned a 30-day stay of execution granted by a judge on May 15 and the U.S. Supreme Court on May 19 denied Barton's attorney's request for a stay of execution

The Associated Press reported that Barton's final statement released prior to his execution, said: "I, Walter 'Arkie' Barton, am innocent and they are executing an innocent man!!"

The Catholic Mobilizing Network also noted Barton's "execution went forward despite his strong claim of innocence" and stressed that his murder conviction was "largely based on the testimony of an unreliable jailhouse informant and the use of bloodstain pattern analysis -- a forensic method with questionable validity."

"Today, as we mourn the unnecessary loss of Walter Barton, we cannot ignore the stark inconsistencies in how society views some lives as valuable, and others as worthless," Vaillancourt Murphy said.