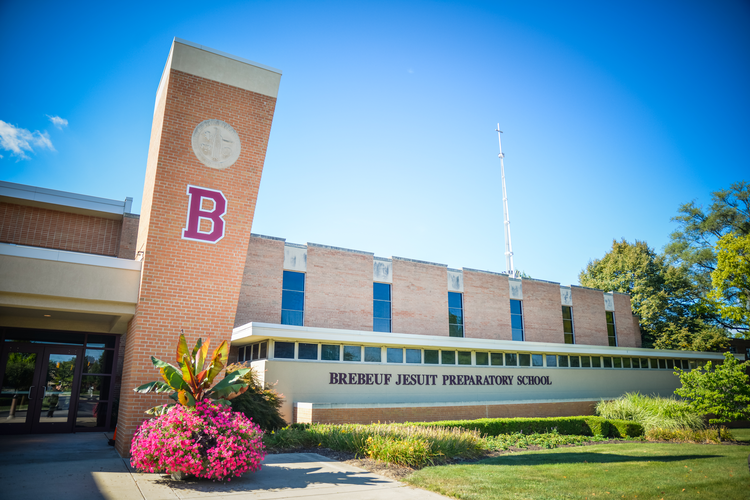 A Jesuit high school in Indianapolis, waiting for the results of an appeal of its archbishop’s decision to revoke its recognition as a Catholic school, will be allowed to continue celebrating schoolwide Masses on campus after the Vatican suspended sanctions against it while the canonical process continues.

In June, the Society of Jesus announced that Archbishop Charles Thompson of Indianapolis had decreed that Brebeuf Jesuit Preparatory School could no longer call itself Catholic after administrators had declined his request to terminate a male teacher who is married to another man.

In an email sent Monday to the Brebeuf school community, William Verbryke, S.J., the school’s president, wrote, “We have just learned that the Congregation for Catholic Education has decided to suspend the Archbishop’s decree on an interim basis, pending its final resolution of our appeal. The Archbishop very kindly informed me that, as a result of this temporary suspension of his decree, Brebeuf is free to resume our normal sacramental celebrations of the Eucharist.” As a result of the sanctions, Brebeuf had not been allowed to hold its traditional Mass of the Holy Spirit to open the academic year. The archdiocese had allowed smaller daily Masses to continue to be held in the school’s chapel.

Father Verbryke wrote that the suspension of sanctions is temporary and that the Vatican is still considering the school’s request to overturn the archbishop’s decree.

“The Congregation for Catholic Education has decided to suspend the Archbishop’s decree pending its final resolution of our appeal.”

“It does not mean that the matter has been resolved, or that any permanent decision has been made. It also does not mean that anyone should infer that the Congregation for Catholic Education is leaning one way or the other on any of the issues at hand,” he said. “The Congregation has simply granted a temporary suspension of the Archbishop’s decree until it makes a final decision.”

Father Verbryke noted that the Vatican’s intervention means the school will be able to mark an important date. “Most happily, this means that we will be able to celebrate the Mass for the Feast Day of St. Jean de Brebeuf on October 24,” he wrote.

The Archdiocese of Indianapolis provided a statement to America reiterating that the appeal process is ongoing, calling the temporary suspension part of “standard canon-law procedures.”

Father Verbryke wrote that the appeal, which is being managed by Brian Paulson, S.J., who heads the Jesuits Midwest Province, is ongoing and that the timeline for a final decision remains unknown.

In his email to the Brebeuf community, Father Verbryke said that the school holds “deep love for our Church” and “deep respect” for the archbishop. He said the Jesuits hope “to remain in full communion with the Catholic Church, without restrictions on our celebration of the Eucharist, and that our identity as a Catholic school be fully recognized and supported by the Archdiocese.”

Other Catholic high schools near Indianapolis have found themselves in controversy this year over similar issues.

In July, Joshua Payne-Elliott filed a lawsuit against the Archdiocese of Indianapolis, claiming wrongful termination after his contract was not renewed for his teaching job at Cathedral High School. Mr. Payne-Elliott is married to Layton Payne-Elliott, the teacher at Brebeuf whose contract renewal sparked the archbishop’s decree. In separate incidents, the archdiocese also faces lawsuits from two women in same-sex marriages who were let go from Roncalli High School.

Nearly 800 students are enrolled at Brebeuf Jesuit, which was founded in 1962 and employs a faculty and staff of 132.

Correction: Sept. 24, 2019
The headline has been updated with the correct spelling of Brebeuf.

The Supreme Court may change how the bishop can react. The question in the appeal is the scope of the Archbishop's power to Interdict a Jesuit school, although it could bleed into the sour grapes question.

On October 8th, the Court hears 3 cases on Title VII of the Civil Rights Act relating to sex discrimination and whether it can be decided judicially. This is not a case about marriage equality per se. The question before the Court is whether the spate of findings that have recognized gays and lesbians as a protected class allow the meaning of sex in the CRA to be expanded to sexuality without having to pass ENDA? It is an argument about how the Court rules, not the result. This is not a First Amendment question.

If the merits of Catholic HR policy were before the Court (that would be a District Court matter to be separately litigated), the question would be of fact. Specifically, does the Church allow employees to enter into heterosexual civil marriage and not homosexual marriage.

No. Bigotry cannot be sanctified in that way, nor can sour grapes over its argument in Perry v. Brown against marriage equality being laughed out of court.

The profound issue is how many retirements will it take until the Church starts blessing gay unions? While the number of global South cardinals is an indication, I must note that they are already bishops.

Amoris Laetitia was pastoral. So is blessing legal civil marriage, especially with a Pope with a doctoral degree in the sciences. He actually can make sense of the argument of disordered or created. Disordered is a sophistry - a relativistic way to avoid scientific reality.

Being gay is biology, not rebellion, and to not believe gay men when they assert otherwise is not only bad behavior, but it asks them to accept our lived experience of faith when we reject their lives experience of their sexuality.

The Catholic Church has no obligation to sacramentalize civil unions. There are relationships that civil laws can make arrangements or allowances for that have no bearing on Catholics beliefs or rituals. It take a man and a woman to have offspring, it’s biological, it’s evolutionary and it’s essential. It’s in the plant world, the animal world and the human world. Without it the world no longer exists, it’s that essential. The Catholic Church allows 1 man and 1 woman to form the sacrament of marriage and pass along the faith to future generations. No big deal, you don’t have to believe or play along. The good news is being a Catholic Is not a mandatory requirement in order for you to live your life, I’m sure there are churches out there that you can join more aligned with your beliefs that will value your lived experience as their guiding light...because your lived experience is way more valuable and real than anyone else’s lived experience.

btw, sorry to inform you but nature doesn’t care about your lived experience

I don't know if you have paid attention, but the person involved in this situation did not ask the Church to sacramentalize his union. He is simply asking that the Church recognize the Constitution of the United States as interpreted by the Supreme Court, and that the Church not interfere with his private life, and his right to keep his livelihood separate from that private life. Even Pope Francis, when he was Cardinal Archbishop of Buenos Aires and primate of Argentina, argued that the Church should not interfere with or question civil unions for gay couples, but only seek to protect sacramental marriage (which, by the way, has always been much more threatened by the "companionate marriage" of the secularists and the Protestants, since it is premised on abrogation of the Savior's decree that marriage become indissoluble--an innovation, by the Savior, against Mosaic Law).

It’s a private school they can do what they want, including doing what the Archbishop has asked them to do... stop calling yourself a Catholic school! I personally think the Church in the US needs to get out of the school business altogether and focus on CCD and faith formation classes at local parishes. Most of these schools have become elitist private school being subsidized the Church that have gone rogue.

The Church does not care about what you think about its school system, but they are obliged to follow employment law. There is no exemption for Chuches for bad behavior.

So the Pope avoids pork? The Church is not obliged to perform gay weddings, but in time it will, just as it did not have to deal sanely with irregular remarriage, which it did. It will have to deal with Title VII changes, which they won't like.

Families with money will demand blessing unions and the Church will cave. My lives experience is having a gay brother and his husband who are Catholic but don't attend and don't really care what Trads think. Some in the hierarchy find gays less obnoxious than those who oppose them, which will increase increase as time goes on. The pseudoscience that you vote was tried by the Organization for Marriage time and again. It was laughed at.

You should be grateful the gay couples are willing to adopt your wretched little bastards to save them from abortion or starvation.

is being catholic genetic? it is indisputably a choice. why the hell fo you deserve federal protection from discrimination?

What a remarkable waste of time, money, and print! The married, gay teacher should have had to courtesy to quit when he chose behavior outside of his contractual obligation. That this matter went all the way up to the Pope is absurd, but typical of members of minorities who continually push the envelope to the dismay of most of society.

"typical of members of minorities who continually push the envelope to the dismay of most of society."

I know exactly what you mean: those upstart blacks insisting on full citizenship rights in the 1950s and 60s were quite tiresome, weren't they?

I had exactly the same thought, Vincent.

Let's not forget those damned irksome people in wheelchairs who insisted they be able to get on to public buses and then on to the sidewalk! The rest of society was getting around just fine!

I had exactly the same thought.

Typical self-righteous Catholic sow. Tell me why do you expect gay people to respect your right to discriminate against them when you’ve been federally protected since 1964. F*ck you and your “religious freedom.”

Yep. This journal would be bleating about "clericalism" if a traditional Catholic school decided to defy its bishop, but when a school in "the Jesuit tradition" is involved, well, winning is everything.

I don't agree, John. If the Society of Jesus were so self-protective it wouldn't allow all the constant Jesuit-bashing on this site.

Look back at articles where there were vigorous exchanges of opinion.
Notice how many posts have disappeared and names vanished?

The question is about whether Interdict is allowed in this matter. By the time the Signatura sees this, the question will be moot because the school will have no choice as an employer. The calling of all teachers ministers is a way to try to invoke Hosannah Tabor. It is dodgy to try. The Church should never be dodgy.

Of course, outright lying by clergy is not new. It is how Richard Dawkins sells books.

This article also appeared in print, under the headline “Sanctions against Brebeuf Jesuit suspended as Vatican appeal continues,” in the October 14, 2019, issue.