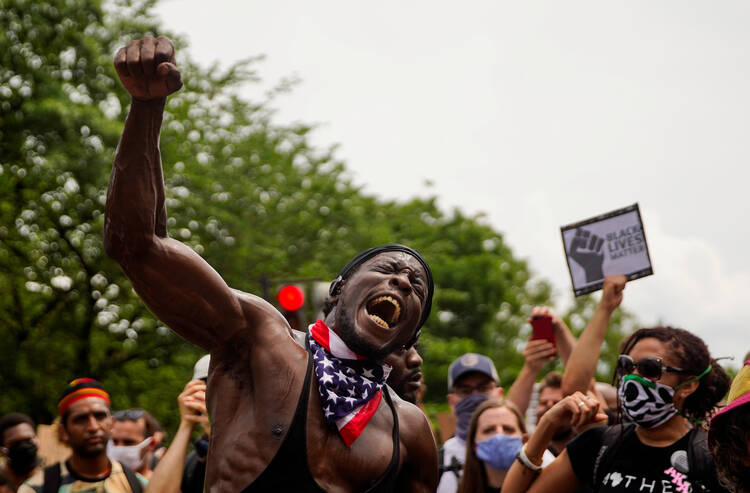 A demonstrator in Washington reacts during a protest against racial inequality June 6, 2020. Demonstrations continue after a white police officer in Minnesota was caught on a bystander's video May 25 pressing his knee into the neck of George Floyd, an African American, who was later pronounced dead at a hospital. (CNS photo/Eric Thayer, Reuters)

The killings of George Floyd, Breonna Taylor and Ahmaud Arbery and the violence and unrest around the nation have sparked renewed conversation around racial justice in our country and in our church. Readers have weighed in on the several articles that America has published on this theme in the past few weeks. Below are excerpts from some of their comments.

St. Thomas Aquinas says that there are three ways we can incur the sin of anger. First is excessive anger. Second is misdirected anger. The third is deficiency of anger. I am interested in this third way. We sin through deficiency of anger when we are not angry enough to boldly join the mass movement against racism, racism that the church calls a sin.
—Adeolu Ademoyo

Catholic institutions should model justice by paying every employee a living wage. Universities that pay football coaches millions should reprioritize and pay grounds workers, cleaning staff, etc., a living wage. They should hire more professors of color and enroll more students of color, and teach the reality of our American history, including slavery and its ongoing ramifications. Catholics must rediscover our social justice roots.
—Annette Magjuka

Just watched some of the media footage surrounding the president’s impromptu address to the cameras on June 1. It is sickening to see the nation again embroiled in fighting itself. I lived in Washington, D.C., during the 1968 riots; we have not changed much since that time. Prayer is of the utmost necessity, not just holding up a Bible. Prayer is something we can all do.
—Frank Huber

Could a large part of the problem in our church be its focus on sin as an individual’s transgression against the divine will or God’s laws? In my read of the Gospels, much of Jesus’ words and actions were directed against the oppressive systems under which his Jewish brothers and sisters lived. So why the church’s fixation on individual transgressions on not on the disorder to God’s world caused by evil such as systemic racism. Why is participation in or enabling of oppressive systems not named a grievous “sin”?
—Tom Whalen

I am an 86-year-old mother of five, a grandmother and great grandmother. I am white. Before I became physically frail with a chronic illness, I rang doorbells, registered voters, made pleading phone calls, pounded the sidewalk for a just society in our country. My heart is bereft of comfort at the foot of this cross. Would that I could hold George Floyd and all the others in my arms close to my breast. I LOVE YOU.
—Angela Embree

We have allowed police forces to become paramilitary units, in part by supplying them with military equipment and encouraging military “take no prisoners” tactics. We need to redefine police forces as peace forces, and institute non-violent philosophies and approaches. As a former U.S. Marine, I know many Marines whose goal upon leaving the Marine Corps was to join a police force, just for the power of carrying a gun. We have too many police officers who are grounded in hate, anger and violence. These people need to be replaced with “peace” officers
—Michael Svenssen

[Breonna] Taylor would be alive and very safe if she could live in a wealthier, “whiter” neighborhood. Our black brothers and sisters should be equally safe at the hands of police, no matter skin color or address. The initial mediocre government response reinforces the fact that many are comfortable with that dichotomy.
—J. Jones