Pope Francis: ‘We have the chance to reverse course to a better, healthier world.’ 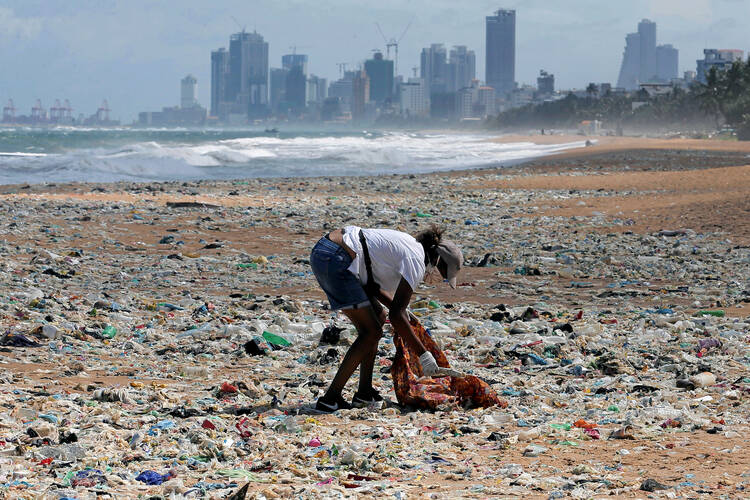 “We cannot pretend to be healthy in a world that is sick,” Pope Francis said in a letter to President Iván Duque Márquez of Colombia in which he called on the world’s governments “to reverse course” and not remain “indifferent to the signs that our planet is being plundered and violated by greed for profit.”

He sent his letter to the president of Colombia because it hosts this year’s World Environment Day. Each W.E.D. focuses on a pressing environmental issue and involves governments, businesses, celebrities and citizens in 143 countries. The United Nations General Assembly in December 1972 designated it to be celebrated annually on June 5.

Pope Francis noted that this year’s event—which focuses on biodiversity—is being held virtually because of the Covid-19 pandemic and said this challenging situation “reminds us that in the face of adversity, new paths always open in order for us to be united as a great human family.”

Pope Francis: “The protection of the environment and respect for the biodiversity of the planet are issues that affect us all. We cannot pretend to be healthy in a world that is sick.”

According to the U.N. website for today’s celebration, its theme of biodiversity expresses a concern “that is both urgent and existential. Recent events, from bushfires in Brazil, the United States and Australia to locust infestations across East Africa—and now, a global disease pandemic—demonstrate the interdependence of humans and the webs of life in which they exist.”

The website informs us that biodiversity embraces eight million plant and animal species, the ecosystems that house them and the genetic diversity among them.

It notes that in the last 150 years, the world’s living coral reef cover has been reduced by half, and within the next 10 years, one out of every four known species may have been wiped off the planet. It adds, “It would take 1.6 earths to meet the demands that humans make on nature each year.”

Pope Francis put it this way: “The protection of the environment and respect for the biodiversity of the planet are issues that affect us all. We cannot pretend to be healthy in a world that is sick. The wounds inflicted on our mother earth are wounds that also bleed in us.

“Caring for ecosystems demands a look to the future,” the pope said, “one that is not concerned only with the immediate moment or that seeks a quick and easy profit, but rather one that is concerned for life and that seeks its preservation for the benefit of all.”

He told participants, “Our attitude toward the present state of our planet should indeed make us concerned for and witnesses to the gravity of the situation.” He added, “We cannot remain silent before the outcry when we realize the very high costs of the destruction and exploitation of the ecosystem.” Francis spelled these concerns out clearly in his 2015 encyclical “Laudato Si’: on the care of our common home,” published then on the eve of the U.N. Climate Change Conference in Paris.

Farms may depend on water — but they are also polluting it.
Nathan Beacom

In today’s letter, he told the world’s governments and people “this is not a time to continue looking the other way, indifferent to the signs that our planet is being plundered and violated by greed for profit, very often in the name of progress.”

“We have the chance to reverse course,” Pope Francis said, “to commit ourselves to a better, healthier world and to pass it on to future generations.” He emphasized, “Everything depends on us, if we really want it.”

Pope Francis recalled that in “Laudato Si’” he “drew attention to the cry that mother earth lifts up to us” and said he has recently invited everyone to reflect on that document over the next year. He hopes it will inspire people “together, to become more committed to the care and protection of our common home and of our most vulnerable and marginalized brothers and sisters in society.”

He concluded today’s letter by expressing his hope that the discussions and events surrounding this year’s World Environment Day “may foster the building of an increasingly habitable world and a more humane society, where all of us have a place and no one is ever left behind.”