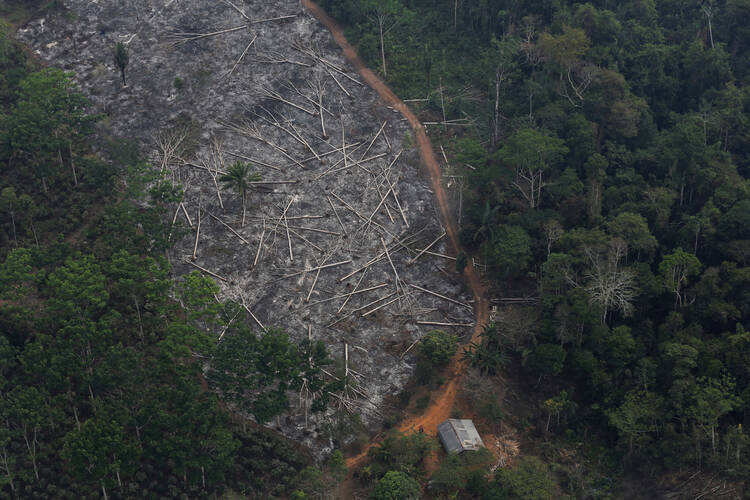 This is an aerial view of a deforested plot of the Amazon at the Bom Futuro National Forest in Porto Velho, Brazil, Sept. 3, 2015. (CNS photo/Nacho Doce, Reuters)

During his Sunday afternoon address, Pope Francis made a surprise announcement of a year-long “special reflection” on his encyclical “Laudato Si’.” The year of reflection starts today, on the fifth anniversary of the publication of the encyclical in which, Pope Francis said, “I sought to draw attention to the cry of the earth and of the poor.”

Pope Francis also sent special greetings to Catholics in China on this Sunday, May 24, as they celebrate the feast of Our Lady Help of Christians and “venerate [her] with particular devotion at the sanctuary of Sheshan” on the outskirts of Shanghai.

This year of reflection on “Laudato Si’” will be held “thanks to an initiative” of the Dicastery for Promoting Integral Human Development, Francis stated. He also introduced a prayer for the year of reflection, saying, “It would be beautiful to say this prayer.” The full text of the prayer is included at the bottom of this article. Pope Francis concluded: “I invite all persons of good will to adhere to this, to take care of our common home and of our most fragile brothers and sisters.”

I sought to draw attention to the cry of the earth and of the poor.

As the Covid-19 pandemic is demonstrating the interconnectedness of everything in the world, this year of reflection highlights Pope Francis’ focus on the intimate link between the protection of nature and of human life, which are central themes in “Laudato Si’.” The encyclical was first published on May 24, 2015, on the eve of the U.N. World Conference on Climate Change.

Today is a major feast for Catholics in China, and Francis, following the practice of his predecessor Benedict XVI, has sent greetings to Catholics in mainland China on the occasion of this feast ever since becoming pope.

“Let us unite ourselves spiritually to the Catholic faithful in China,” Francis said, in his telecast address from the papal library of the Vatican’s Apostolic Palace, after reciting the Regina Coeli Laetare prayer at midday.

“Let us entrust to the guidance and to the protection of our Heavenly Mother the pastors and the faithful of the Catholic church in that great land, so that they may be strong in faith and firm in fraternal union, and be joyful witnesses and promoters of charity and hope,” Francis said as he invited Catholics throughout the world to join in this prayer for Catholics in China.

He then addressed the roughly 12 million Chinese Catholics with some personal words. “Most dear brother and sister Catholics in China, I wish to assure you that the universal church, of which you are an integral part, shares your hopes and sustains you in the trials of life. It accompanies you with prayer for a new outpouring of the Holy Spirit, so that the light and the beauty of the Gospel may shine forth in you, together with the power of God for the salvation of whoever believes.”

Most dear brother and sister Catholics in China, I wish to assure you that the universal church, of which you are an integral part, shares your hopes and sustains you in the trials of life.

His reference to the “trials” of Catholics in the mainland is particularly significant, signaling his awareness that even after the signing of a provisional agreement between the Chinese government in Beijing and the Holy See on the appointment of bishops, on Sept. 22, 2018, the situation has not improved much for the Catholic community in that land, and least of all for the roughly five million to six million members of the “underground” community of believers. He concluded his message of encouragement to Chinese Catholics with a special apostolic blessing, assuring them of his “great love and sincere affection” and ending with “May Our Lady protect you always!”

Then turning again to the virtual audience following his live address through streaming on Vatican Media, Pope Francis referred to the pandemic and the turbulence it has caused in the world. On this feast day, he said “let us entrust to the intercession of Our Lady all the disciples of the Lord and all persons of good will who, in this difficult time, in every part of the world work with passion and commitment for peace, for dialogue among nations, for the service of the poor, for the care of creation and for the victory of humanity over every illness of the body, of the heart and of the soul.”

The pope also extended a special feast day greeting to the members of the Salesian Order whose founder St. Don Bosco had a special devotion to Mary Help of Christians and helped spread that devotion worldwide. “I extend an affectionate and cordial greeting to all Salesian men and women, and I recall with gratitude the spiritual formation that I received from the sons of Don Bosco,” Francis stated.

Pope Francis concluded by recalling that today the church also celebrates the 54th World Communications Day, a celebration initiated at the request of the Second Vatican Council. His message for this year focused on the theme of storytelling, and he said, “May this event encourage us to tell and share constructive stories that help us to understand that we are all part of a story that is larger than ourselves, and can look forward to the future with hope if we truly care for one another as brothers and sisters.”

Loving God,
Creator of Heaven, Earth, and all therein contained.
Open our minds and touch our hearts,
so that we can be part of Creation, your gift.

Be present to those in need in these difficult times,
especially the poorest and most vulnerable.
Help us to show creative solidarity
as we confront the consequences of the global pandemic.
Make us courageous in embracing
the changes required to seek the common good.
Now more than ever, may we all feel interconnected and interdependent.

Enable us to succeed in listening and responding
to the cry of the Earth and the cry of the poor.
May their current sufferings become the birth-pangs
of a more fraternal and sustainable world.

We pray through Christ our Lord,
under the loving gaze of Mary Help of Christians,