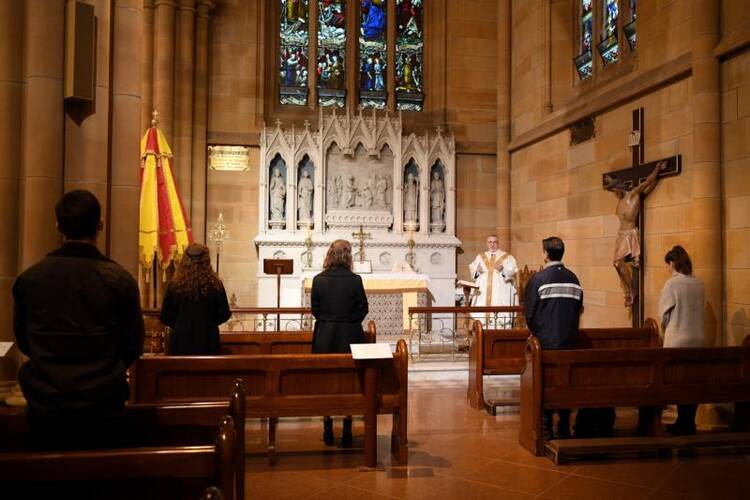 People maintain social distancing as they attend Mass at St Mary's Cathedral in Sydney May 15, 2020, during the COVID-19 pandemic. (CNS photo/Dan Himbrechts, AAP Image via Reuters)

MUDGEE, Australia (CNS) -- Australia's bishops and religious are considering the recommendations for change in a 208-page review into the governance of the church.

If implemented, they would see administrative and financial control of dioceses and parishes radically reshaped and shared between the clergy and laypeople and an increased role for women.

In mid-May, the bishops considered the report, "The Light from the Southern Cross: Promoting Co-Responsible Governance in the Catholic Church in Australia," submitted by the Implementation Advisory Group's Governance Review Project Team. They are continuing to mull a response to 86 recommendations.

The report was initiated by the Australian Catholic Bishops' Conference in May 2019 in response to a key recommendation of Australia's landmark Royal Commission into Institutional Responses to Child Sexual Abuse.

The governance report was written by 14 people, handpicked lay and clergy -- men and women -- from Australia as well as international experts. People familiar with the process who declined to be identified said the report was to have been kept secret until about November, but it was leaked to the internet June 1.

A spokesman for the bishops said: "The version that has been published is not the final document. One of the reasons for the delay of the report's release was the need for some corrections and clarifications. That process has commenced and is likely to take several weeks. There is also a need to discern how and when various recommendations might best be considered, not least in light of the upcoming assemblies of the Plenary Council."

Catholic News Service verified the report with two of the authors, who said any changes would be minor tweaks.

The report recommended that bishops would be required to have a college of consultors that would include laymen as well as laywomen. They would be consulted on appointments and finances, and bishops would also be required to consult with independent subject matter experts when appropriate.

Both dioceses and parishes would have to establish pastoral councils and introduce more transparency, including the regular auditing of finances and child safeguards.

The report recommended the bishops' conference would be required to make the process of selecting bishops transparent.

"The absence of public consultation, together with the opaqueness of the selection process, leaves all but the select few consulted in the dark and calls into question its efficacy," the report said of the current process.

In mid-May, Archbishop Mark Coleridge of Brisbane, ACBC president, congratulated the governance review project team for "producing such a substantial piece of work, with far-reaching implications for the church's life and mission."

The report and the Plenary Council were bishops' initiatives in response to recommendations of the Royal Commission, which released its report in December 2017. Because of the COVID-19 pandemic, the first session of the Plenary Council, originally scheduled for the fall, has been delayed until October 2021.

Laypeople will be allowed to vote in the council, and its decisions could be binding on the nation's Catholics, once ratified by the Vatican.

Michael Sainsbury - Catholic News Service
Provide feedback on this article
Join the conversation: Login or create an account
Before you can comment, you need to update your profile to include your first and last name, as required in our comments policy. Then reload this page and you'll be set up for commenting. Update your profile