‘The ink has run dry on writing statements.’ Black Catholics call for action in wake of George Floyd’s killing 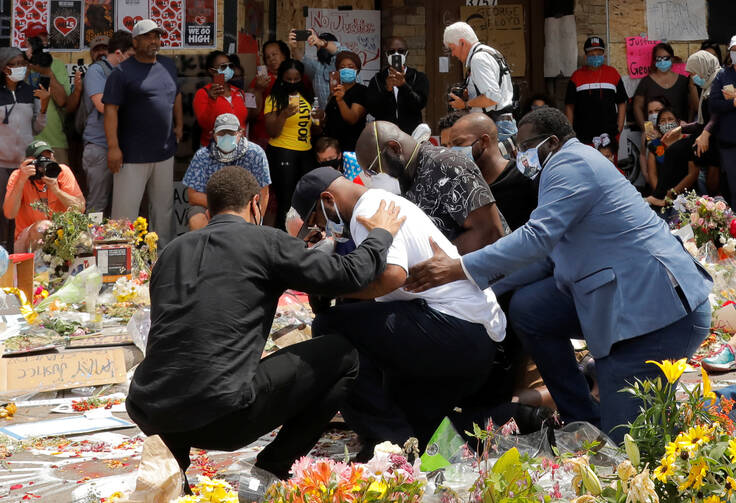 Terrence Floyd, the brother of George Floyd, reacts at a makeshift memorial at the spot where he was taken into custody in Minneapolis June 1, 2020. Demonstrations continue after a white police officer was caught on a bystander's video May 25 pressing his knee into the neck of George Floyd, an African American, who later died at a hospital. (CNS photo/Lucas Jackson, Reuters)

Sister Mumbi Kigutha had just finished participating in a “circle of lament” with about 20 other people on Saturday, sharing their fears and frustrations about racism in the United States and the killing of George Floyd by a Minneapolis police officer, when she decided she needed to get out of the house.

She left the home she shares with other Sisters of the Precious Blood in Chicago’s Bridgeport neighborhood and headed to a protest happening downtown. She wanted to be around other people who know the challenges of being black in the United States today and to release the energy that had been building up within her.

“Going to be with people, where we could walk and just give a nod to one another, a smile, and look in the eyes of people who, I knew, instinctively got it, that was very important for me to channel in some of the rage and anger and frustration I had been feeling,” she said.

“You can only oppress people so long before things tend to erupt.”

When she returned home later that day, she saw on the news that the peaceful protest she had witnessed had become chaotic. She said she was not surprised.

“When people are cornered and they have nowhere else to turn, this is to be expected,” Sister Kigutha said in an interview with America. “You can only oppress people so long before things tend to erupt.”

Sister Kigutha said black people in the United States share a “pent up grief” they must carry with them because so few resources are devoted to healing. “This is not just about George Floyd, it's about 400 years of different tactics used to oppress people,” she said.

Sister Kigutha is just one of many black Catholics expressing frustration with racism in the United States and calling for systemic change in how the nation enforces its laws.

The National Black Catholic Congress called for a transparent investigation into the killing of Mr. Floyd.

The National Black Catholic Congress, for example, called for a transparent investigation into the killing of Mr. Floyd and it said that the nation must grapple with the conditions that allowed for such an event to take place.

“We renew our call for a nationwide and sustained examination of conscience,” the Baltimore-based organization said in a statement. “Our nation must decisively confront and correct the conditions which allow violations of the inherent dignity of the human person. Our nation must have a firm purpose of amendment so that this centuries-old pandemic of racism is eradicated.”

The National Black Sisters’ Conference, a group representing black women who belong to Catholic religious orders in the United States, compared the present-day killings of African Americans by police to lynchings in the 19th and 20th centuries.

“African American men, women, and children are still being lynched, murdered, and executed for playing with a toy gun, watching television in one’s own home, and mistaken identity, driving or jogging while black, and being choked to death in cold blood by law enforcement officers, who have sworn to serve and protect,” reads a statement published to the group’s Facebook page on May 30.

“As Christians, as Catholics, as people of faith, we must do more than just pray; we must model Jesus’ message to love one’s neighbor.”

The group, based in Washington and founded in 1968, said that solutions to systemic racism and ending police brutality include holding law enforcement accountable for its “willful negligence and compliance in racist activities and actions,” barring choke-holds and other police tactics like the one that killed Mr. Floyd and charging police with murder in cases where excessive force was used.

“As Christians, as Catholics, as people of faith, we must do more than just pray; we must model Jesus’ message to love one’s neighbor,” the statement continued. “Our neighbor cannot breathe! Our neighbor is being lynched! Our neighbor is dying!”

Moving beyond writing statements of condolence and regret and instead enacting laws that protect black Americans must be the priority following Mr. Floyd’s death, the Knights of Peter Claver said in a statement. The group calls itself “the largest historically African-American Catholic lay organization in the United States.”

“The anger, emotions and outrage must be followed by effective solutions that do more than just penalize murderous actions, but eliminate future ones,” read the statement, posted on May 29. “The ink has run dry on writing statements, and it is now time to write laws, to write policies, to write sentences.”

“The ink has run dry on writing statements, and it is now time to write laws, to write policies, to write sentences.”

The president of Xavier University Louisiana, an historically black Catholic university, wrote in a letter to students that justifications for killings like that of Mr. Floyd’s make sense only in “the American mind corrupted by its notions of race.”

“In the 1890s and early 1900s, when whiteness resurged to wipe away the gains of Emancipation and Reconstruction, the nation reasserted the privilege of whiteness, a privilege to instill fear and to act with impunity on blacks,” President C. Reynold Verret wrote. “Thus, came the Klan, the mobs and the policies and laws to disempower folk of color.”

He called for “struggle” but said the focus should be on fighting for justice.

“Let us not be misled by those who urge us to destroy,” Dr. Verret wrote. “Let us act for justice, walk prudently focusing righteous anger and pain toward right action, always honoring the memories of the sisters and brothers we lost. They are your best instruments as you take on the calling to build the more just and humane world.”

Like other groups representing black Catholics, the National Association of Black Catholic Deacons highlighted not only Mr. Floyd’s killing but also the deaths of other unarmed black men killed by police in recent years, including Freddie Gray, Michael Brown and Oscar Grant.

“Although these deaths are tragic, they are symptomatic and they expose a deep-seated connection between institutional racism and the continued erosion of the sanctity of life,” the group said in a statement, adding, “also, the connection between acceptance and justification for taking the life of unarmed Black men.”

“These deaths defy the fundamental principle of justice, every belief in dignity and the fact that all of our lives are connected. As human beings, we are responsible for each other,” it continued.

“Even if this ‘does not affect you,’ at this particular moment, it is affecting you because it’s affecting just about everybody.”

Danielle M. Brown is the associate director for the U.S. Conference of Catholic Bishops’ ad hoc committee against racism. She said Catholics should commit to education about racism and commit to dialogue, even if it’s not always comfortable. She noted that she has attended parishes where she feels welcome as a black Catholic, but has heard priests receive negative feedback when they preach about racism.

“These are not homilies that are calling anybody bad names, they’re not accusing anybody of racism, they’re simply addressing the sin of racism, and the pastor gets angry emails,” she said.

To help get those conversations started, Ms. Brown suggested resources such as the U.S. bishops’ 2018 pastoral letter on racism. She said prayer is an important element of education about race.

“White Catholics have to realize, point blank, we have got to pray about this. Even if this ‘does not affect you,’ at this particular moment, it is affecting you because it’s affecting just about everybody,” Ms. Brown said. “What we're seeing is a waking up of a national consciousness. White Catholics have to know that they are part of the change and part of the solution.”

As for Sister Kigutha, she said witnessing the trauma of African American communities hit disproportionately hard by Covid-19, followed by the latest highly-publicized act of police brutality against a black person, has caused her and other black people grief and stress. She has cried many times during the previous several days and is worried the nation will simply move on in a few weeks.

But Sister Kigutha said she will again need to release frustration, so she plans to leave her home again in the coming days. “I’m going to go out and help clean up the neighborhood,” she said.

She hopes white Catholics will choose to act in response to the protests, both by learning about the church’s role in perpetuating racism and then by doing something to enact change.

“I hope that Catholics and the parishes and the dioceses will put their money behind their wonderful statements that they’re issuing and do something. If the prelates and the clergy would all come out and march with this group of protesters, the police response would be way different,” she said.