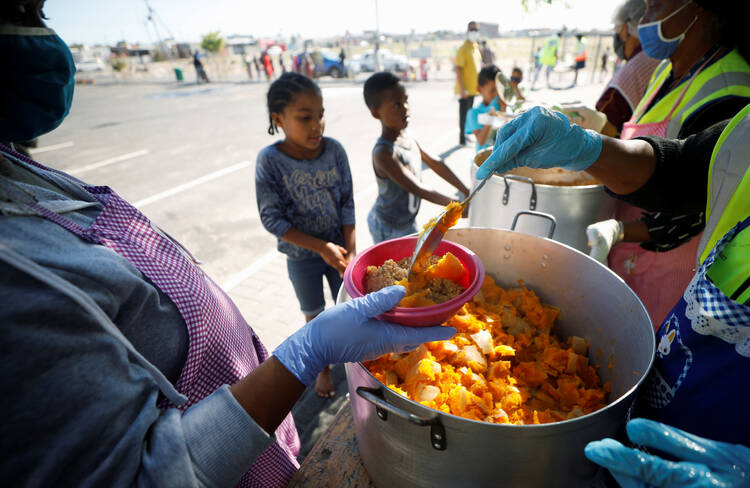 Children wait in line for food at a school near Cape Town, South Africa, May 4, 2020, during the COVID-19 pandemic. (CNS photo/Mike Hutchings, Reuters)

As South Africa moves into its second week of “Stage 4 Covid-19 Lockdown” (the previous weeks having been retroactively designated “Stage 5”), there are growing signs of discontent and calls in some circles to end the lockdown altogether in its present form or at least to move faster to less restrictive stages. The reasons for this boil down to two key factors: widespread economic hardship and growing public impatience with what is perceived as authoritarian high-handedness in preserving the lockdown.

On the economic front, a recent report suggests that 34 percent of South Africans have gone to bed hungry during the lockdown. This is due to the knock-on effect of the dramatic rise in unemployment as businesses large and small issue layoffs or creep closer to bankruptcy.

Among the bigger businesses, virtually every South African domestic airline is filing for a business rescue. And Edcon Holdings, a clothing retail conglomerate that was already faltering before the lockdown, is set to close unless it too goes into business rescue. Under the lockdown, clothing retail shops have been deemed “non-essential” and so remain closed. In addition, many people in the casually employed sector, including persons in domestic service, have also lost their jobs.

A senior opposition leader said that the lockdown—aimed not to prevent the spread of Covid-19 but to give the health services a window to prepare for it—was now doing more harm than good.

On May 8, John Steenhuisen, senior member of parliament for the main opposition party, the Democratic Alliance, added his voice to the call for an end to the lockdown in its present form. Arguing that the lockdown—which he had supported—was aimed not to prevent the spread of Covid-19 but to give the health services a window to prepare for it, he proposed that it is now doing more harm than good.

Its curfews and restrictions on work and on trade are now destroying the economy without having a compensatory impact on reducing the virus’ spread, according to Mr. Steenhuisen. He noted that the estimated loss of jobs—between 3 million and 7 million—and the loss of 285 billion rand in tax revenue ($15.5 billion) will have a devastating effect on the country, particularly on the poor.

Mr. Steenhuisen suggested an alternative. Based on careful analysis of data, including breakdowns of regions most affected, he urged a quicker reopening of businesses with strict safety regulations.

On May 14 the Democratic Alliance said that it was taking the government to court to challenge parts of the strict lockdown. It plans to challenge the “rationality” of a night curfew, restrictions on e-commerce and its three-hour window to exercise.

South Africans have been under lockdown since March 27. Many still cannot leave home except for essential business like getting food and medicine. Sales of cigarettes and alcohol are still banned. The D.A. says the lockdown is “tearing our society and economy to pieces.”

As hunger grows, attempts to distribute food parcels are being hampered by state bureaucracy.

South Africa has the most Covid-19 cases in Africa with more than 12,000; more than 200 have died. In an address to the nation on May 13, President Cyril Ramaphosa conceded that mistakes were made in instituting the lockdown and committed to more transparency on decision-making in the future.

“This coronavirus is taking a heavy toll not only on the health of our people, but also on our people’s ability to earn a living, to feed themselves and their families, to learn and to develop, and to enjoy many of the basic freedoms that we daily take for granted,” he acknowledged, but, he insisted “despite its duration and its severity, the lockdown was absolutely necessary.” He said infections would have “soared uncontrollably” in the country of 57 million without the strict lockdown and “many thousands” would have died.

The president said South African officials “are now preparing for a further easing of the lockdown and a gradual opening of the economy,” adding, “I will repeat what I have said before: if we lift the lockdown too abruptly and too quickly, we risk a rapid and unmanageable surge in infections.”

But as hunger grows, attempts to distribute food parcels are being hampered by state bureaucracy. Individuals and community organizations that previously only needed a local police permit to be allowed “outside” to distribute food now have to seek permission from the government, and government distribution of food has been haphazard, even chaotic.

The requirement of government bidding for relief contracts has raised the specter of corruption, and there have been allegations throughout southern Africa of political interference in the process. Sources familiar with food aid distribution say that the cost of officially sourced state food parcels far exceeds the average cost of comparative packages distributed by individuals or nongovernment organizations.

President Cyril Ramaphosa conceded that mistakes were made in instituting the lockdown and committed to more transparency on decision-making in the future.

During his address, Mr. Ramaphosa reassured South Africans that funds for Covid-19 relief would not be wasted or stolen. While many South Africans sympathize with Mr. Ramaphosa’s good intentions, many are not confident that he will able to follow through on this assurance.

There have also been widespread accounts of excessive use of force by the military and police charged with enforcing the lockdown. One case, the death of Alexandra township resident Collins Khosa at the hands of the South African National Defence Force and the Johannesburg Metropolitan Police Department on Good Friday, has reached the courts.

Mr. Khosa was “strangled, slammed against a cement wall and a steel gate and hit with the butt of a machine gun,” reported the Mail & Guardian, after an altercation with security forces. He died a few hours later. The case continues, but the presiding judge has already noted that authorities need to restore public confidence in the security forces.

Whether the latter is possible now is anybody’s guess. As the state seems even more determined to keep order—“stamping the authority of the state,” as Police Minister Bheki Cele put it recently—some commentators predict that there will be increasing civil disobedience in protest against the lockdown restrictions.

Black market racketeering has become widespread, most notably the trade in alcohol and cigarettes. Sales of those goods normally bring in considerable amounts of tax revenue, but their sale has been prohibited under lockdown.

It has not improved public confidence that the apparent chief agent of these restrictions, Minister of Cooperative Governance and Traditional Affairs Nkosazana Dlamini-Zuma, the ex-wife of the former president Jacob Zuma, is alleged to have connections to persons engaged in the contraband trade in cigarettes. One such person, Adriano Mazzotti, allegedly helped finance her recent bid to be elected president of the African National Congress political party.

Mr. Mazzotti also has ties with Economic Freedom Fighters leader Julius Malema. The E.F.F. has so far been the opposition party most supportive of the lockdown, a view shared by the members of the ruling African National Congress, described as the “radical economic transformation” wing of the A.N.C., who oppose Mr. Ramaphosa.

It is perhaps not surprising that there are growing calls to either end the lockdown or to drastically amend its restrictions to allow more people to go back to work. A controversial report by a group of actuaries compared the prospective deaths from Covid-19 against potential deaths from hunger—as well as the long-term impact on the South African economy—and concluded that maintaining the lockdown could be possibly 30 times more lethal than the pandemic.

A series of briefs produced by Mathew Kruger of the Helen Suzman Foundation argues that the lockdown is in fact unconstitutional. In particular, Mr. Kruger says the Disaster Management Act, under which the lockdown has been imposed, needs to be read through the lens of the Constitution. It is his position that the public health and economy cannot be the only criteria used to decide on a societal lockdown.

His complex analysis echoes growing concerns among civil society actors and academics that respect for human rights and due process are being abandoned and that the state is exceeding its authority in efforts to enforce the lockdown.