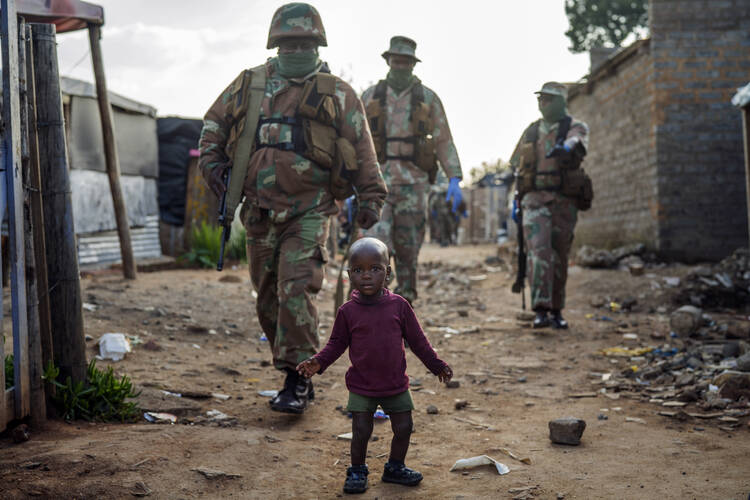 South African National Defense Forces patrol the Sjwetla informal settlement after pushing back residents into their homes on the outskirts of the Alexandra township in Johannesburg, on April 20. The residents were protesting the lack of food. (AP Photo/Jerome Delay)

As South Africa moves into the fourth week of its Covid-19 lockdown—the initial 21-day period having been extended a further 14 days—South Africans are beginning to assess its human costs. Apart from its devastating impact on the economy, the lockdown has suppressed some major types of crime and inspired a surge in some others. But above all, the lockdown has translated into a sharp increase in national levels of poverty and malnutrition. However essential the lockdown is to prevent the spread of the coronavirus, because of that emerging suffering, some are already beginning to wonder if the nationwide restrictions are doing more harm than good.

As the lockdown enters its second month, there is some good news to report. Compared with the same period in 2019, violent crimes have dropped sharply across South Africa. Year-to-year reported numbers for murder (326 to 94), rape (699 to 101) and assault (2,673 to 456) have all declined. Similarly, car and truck hijacking and business and house robberies have dropped from 8,853 to 2,098, and the deaths from road accidents over the Easter weekend dropped 82 percent—from 162 in 2019 to just 28.

The national coronavirus lockdown has translated into a sharp increase in levels of poverty and malnutrition in South Africa. Some are already beginning to wonder if the nationwide restrictions are doing more harm than good.

Police Minister Bheki Cele argued that these declines could be ascribed to the ban on alcohol sales during the lockdown. Many on social media have condemned that assessment as a reflection of the minister’s own prejudices against alcohol (he is at heart a prohibitionist). While a now necessarily sober judgment might characterize the alcohol ban as a contributing factor, the restriction on movement and insistence on social distancing are the more likely causes of the overall decline in violent crime.

Unfortunately, gender-based violence has comparatively increased during the lockdown—2,300 complaints were registered between March 27 and March 31 alone. The majority of these assaults go unreported, suggesting the true numbers are, as always, much higher.

And despite the drop in business and home invasions, there has been a spike in burglaries of unoccupied buildings. At least 183 schools and a number of churches have been robbed and vandalized during this period. St Mary’s Catholic Cathedral in Cape Town, burglarized on April 17, was a prominent case.

Ironically, St. Mary’s is situated in central Cape Town opposite the House of Parliament. Evidently, with Parliament not in session and security forces deployed to keep order elsewhere, the legislature and its precincts were vulnerable.

But behind these specific lockdown-related developments a great specter looms: hunger. A widely circulated statement captures the growing public sentiment: “I would rather die of Covid-19 than die of hunger.”

As the lockdown enters its second month, there is some good news to report. Compared with the same period in 2019, violent crimes have dropped sharply across South Africa.

The wealthy and the middle class can tap into savings to buy necessities, but the vast majority of South Africans among the working poor and the unemployed—and in particular their children—have no income now because of the lockdown and no reserves to reach into to buy food. Those who work in casual employment or in the informal sector are now unemployed. South Africa already had a high unemployment rate at 29 percent in early 2020. Now even larger numbers are unable to provide for themselves and their families.

In conversations among priests from various parts of South Africa a doleful reality is heard: People are starting to starve. In one of our own Jesuit parishes in Johannesburg we hear of parishioners who are unable to find food.

The normal channels of getting food to the hungry are, of course, seriously hampered by lockdown restrictions. We have heard accounts of charitable individuals who have tried to deliver food during the lockdown becoming harassed by police; religious communities on lockdown themselves are struggling to keep in contact with each other, let alone coordinate charitable works.

In some places food protests have erupted in defiance of lockdown orders, leading to looting and clashes with security forces. These tensions and the uneven response of the government to the problem of poverty during this crisis may lead to a widening social crisis and possibly augur a lurch leftward at the next general election.

South Africa’s president President Cyril Ramaphosa on April 21 announced an “extraordinary budget” of $500 billion rand ($26 billion) to address the huge socioeconomic effects of the coronavirus pandemic, saying that “our country and the world we live in will never be the same again."

In a national address, he said the “historic” amount is roughly 10 percent of South Africa G.D.P., adding that the top priorities for the relief package are combating the virus and relieving “hunger and social distress.”

Although opposition parties are pulling with the president at the moment, by the next elections his handling of the crisis will surely come under scrutiny. The opposition may use any flaws in managing the current situation to draw working-class and unemployed votes.

In conversations among priests from various parts of South Africa a doleful reality is heard: People are starting to starve. In one of our own Jesuit parishes in Johannesburg we hear of parishioners who are unable to find food.

That could strengthen the hand of Mr. Ramaphosa’s internal African National Congress opponents, happy to use any difficulties in crisis management to unseat him as party leader and national president either before or after the next general elections, scheduled for 2024. It is possible that Mr. Ramaphosa, who has become a “poster president” for the World Health Organization, may succeed in overcoming the pandemic only to find himself in a position similar to Britain’s Winston Churchill after World War II—voted out of office.

One journalist, Rebecca Davis, has summed up the problems with the national food relief effort well. Ms. Davis reports that the state’s social welfare system lacks the capacity to distribute emergency food aid and that the national databases documenting who actually needs food are hopelessly out of date. The bureaucratic process to verify requests for assistance, she reports, is inadequate—uncoordinated between provinces and understaffed.

The relief process itself has been politicized and corrupted by officials demanding proof of political loyalties before allowing food distributions. Finally, the centralized food distribution points represent a Covid-19 risk since they have poorly enforced social distancing. Business and management experts suggest the distribution of food vouchers and a basic income grant as solutions to the chaos so far in relief efforts, but this good proposal is likely to be stymied by bureaucracy and mismanagement.

The lockdown may be working to flatten the curve of Covid-19 infection. I say this cautiously because that is contingent on two factors: quick and accurate testing and whether or not the infection rate is actually declining. But the immediate human cost has been immense.

It is a case, perhaps, of the cure being potentially worse than the disease. Is it better to risk death by starvation than by Covid-19? I personally cannot answer that question on anyone’s behalf but my own.

Many other South Africans, especially those facing starvation, seem to have already made up their minds.