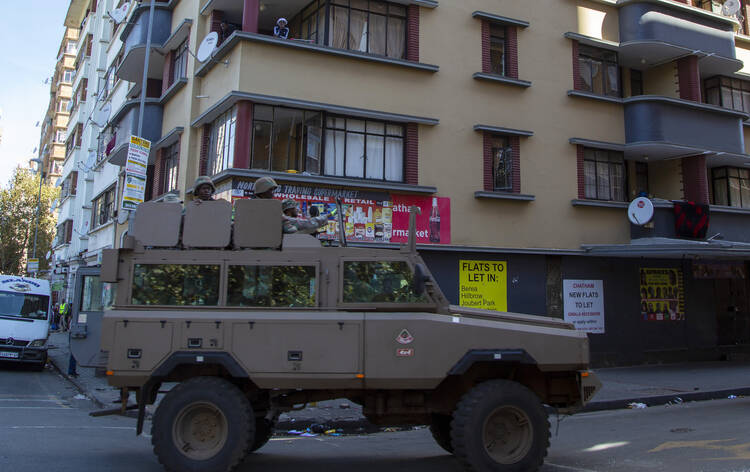 Residents stand on a balcony as a South African National Defence Forces vehicle patrol the street, in Johannesburg on April 7. South Africa and more than half of Africa's 54 countries have imposed lockdowns, curfews, travel bans or other restrictions to try to contain the spread of COVID-19. (AP Photo/Themba Hadebe)

Here in Johannesburg on April 6 we are in the second week of a 21-day nationwide lockdown initiated by the South African government. It began at midnight on March 26 and will last, according to the latest instruction, until April 16.

The national measures being taken against the spread of the coronavirus in South Africa are unprecedented and are considered among the strictest in the world. The lockdown’s purpose, as in other countries, is to slow the spread of the coronavirus, buying time for already overstretched national health care personnel to test for the virus, treat the infected and ultimately help global medical researchers (including many in South Africa) conduct necessary clinical trials toward a treatment or vaccine.

Speaking to the nation on television on March 23, President Cyril Ramaphosa ordered all South Africans except those in essential services to be confined to their homes during the lockdown period. No one is expected to leave their homes except for emergencies, buying food and other essential goods, or going to the doctor. Not even dog-walking is allowed.

South Africa has the most confirmed virus cases on the continent with more than 1,700. The health minister said fewer than 100 people across the country are currently hospitalized.

The national measures being taken against the spread of the coronavirus in South Africa are unprecedented and are considered among the strictest in the world.

All public places were ordered closed, including churches, schools, universities, parks, cinemas, theaters and restaurants, an intensification of an earlier measure that had either closed down these sites or severely restricted the number of people who could be present at them at any time.

After the earlier, limited restrictions began on March 15, many institutions scrambled to find ways to continue their work. Schools and universities sent students home while staff tried to migrate their education online. Initially, many educators and other institutional staff still reported to work sites, but after more limits were put in place on March 26 all staff had to find ways to work from home.

In a move that has caused some tension, certain goods deemed nonessential may no longer be sold in stores. These include alcohol and tobacco and various appliances. The problem here is multifaceted and allows no simple answer. Since specialist stores are closed, it would be an unfair advantage in these times to allow supermarkets that stock such goods to continue to sell them.

Regarding alcohol, the government apparently worries that access would encourage overindulgence and might contribute to domestic violence. Some psychologists worry, however, that an abrupt cut-off could lead to withdrawal symptoms that could also lead to domestic violence.

There is fear that a severely restricted judiciary might encourage excesses by security forces during the lockdown. Cases of police brutality, in fact, have already been reported.

Similarly, the South African judiciary has been placed on semi-lockdown, only convening for cases deemed urgent. That decision, instituted by the Ministry of Justice, was initially challenged by the chief justice of the Constitutional Court, Mogoeng Mogoeng.

He argued that this order constituted an interference in the autonomy of the judiciary by the executive wing of government. He later agreed that limits on court activity should be imposed but insisted that certain key cases—including those related to the lockdown itself—had to continue. Tensions between the chief justice and the ministry continue, however.

Beyond the question of interference in another arm of the government, there is fear that a severely restricted judiciary might encourage excesses by security forces during the lockdown. Cases of police brutality, in fact, have already been reported, including an incident that left three people shot dead by security forces—at the time, the same death toll claimed by Covid-19.

The civil tensions have not been helped by the aggressive style of Police Minister Bheki Cele during press conferences. Above all there is a question of how far security forces may act legally during what Mr. Ramaphosa has called a “state of national disaster,” but not a “state of emergency.” A state of emergency declaration is heavily restricted under South Africa’s Constitution and Bill of Rights.)

Beyond the civil rights and security questions raised by the Covid-19 lockdown, there is a looming impact on the economy. South Africa can ill afford the losses that will result from the lockdown’s restrictions. It is already predicted that the economy will shrink by 23.5 percent in the second quarter of 2020.

South African communities have for the most part hunkered down to life under lockdown. Social institutions have tried to adapt.

In a country with an already high unemployment rate, this is a disaster. Although various relief packages were introduced, which included incentives to businesses not to lay off workers during the crisis, Mr. Ramaphosa's government is already cash-strapped because of the rampant corruption of his predecessor’s government and cannot afford to buoy up the private sector.

A South African civic advocacy group, Corruption Watch, released its annual report on March 31. Its executive director, David Lewis said, “This crisis has thrown into sharp relief the deadly consequences of corruption, at this stage most particularly the corruption that has resulted in dysfunctional local government and that has devastated the public health and water sectors.

“Make no mistake: lives that would have otherwise been saved will now be lost as a direct consequence of corruption,” he said.

Adding to the potential impact on the economy, millions of South Africans work in the informal sector as street vendors. They will find no assistance under the programs being discussed by the government. Likewise, many small businesses will face bankruptcy by the end of the lockdown.

Banking economist Peter Worthington said that the president’s swift action might lessen the disaster over the long term. But this is, he admits, “a hope, rather than a strong likelihood.”

South African communities have for the most part hunkered down to life under lockdown. Social institutions have tried to adapt. Education continues, haphazardly. The wealthy and the middle class are probably doing best because they have the technology and resources to endure without too much trouble. The church is struggling to adapt to a situation where pastors are separated from their flocks.

After mixed responses and sometimes divisions between those who resisted social distancing and those who accepted it as an unfortunate necessity, attempts are now being made at local levels to support the faithful. Numerous attempts have been made to produce online services. The Jesuit Institute South Africa, where I am based, is even running an online Easter Triduum Retreat. These and other examples are innovations born of the emergency.

What Covid-19 might mean for the church and religion in general in South Africa is anybody’s guess. What it might mean for the South African and global economy is similarly unclear. The only thing clear at the moment is that as the virus continues to spread, people everywhere, including South Africa, are in a race against time to find a cure for it.

When that cure is found, we will be in a different world.