U.S. support for Israeli settlements could doom a Palestinian state 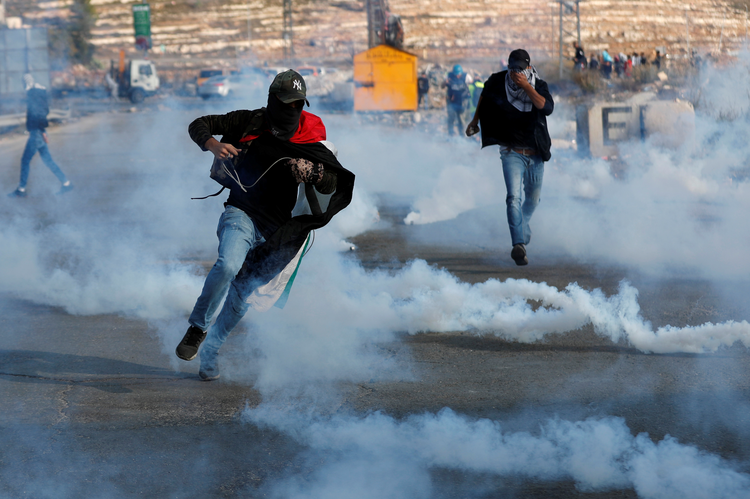 Palestinian demonstrators run away from tear gas fired by Israeli forces on Nov. 16, during an anti-Israel protest near the Jewish settlement of Beit El in the Israeli-occupied West Bank. (CNS photo/Mohamad Torokman, Reuters)

Secretary of State Mike Pompeo’s announcement on Nov. 10 that the United States no longer regards Israeli settlements on the West Bank as illegal is but one in a string of decisions where the administration has abandoned commitments to vulnerable populations. Under Pope John Paul II, the church took a preferential option for the poor and the oppressed. Under President Trump, the U.S. government appears to follow a preferential option for the powerful and those doing the oppressing.

In October, Mr. Trump abandoned the Syrian Kurds to the mercy of Turkey and its president, Recep Tayyip Erdoğan. In Ukraine, we now know, the administration has executed a duplicitous policy that has put that country’s defense at risk before its hostile neighbor, Russia. This March, it acceded to the Israeli annexation of the Golan Heights, formerly Syrian territory. And now it has reversed longstanding U.S. policy critical of Israeli settlements on the West Bank, abandoning the Palestinian people on the premise that the illegality of the settlements under international law is of no weight in the Palestinian-Israeli dispute.

In asserting that the settlements are not illegal, Mr. Pompeo further undermines prospects for a negotiated peace with the Palestinians.

Billing that abandonment as a shift away from Obama-era policy, the new policy actually breaks with a four-decade-long bipartisan consensus. Turning his back on international law, Mr. Pompeo contends that the settlements represent a “complex political problem that can only be solved by negotiations between the Israelis and the Palestinians.”

It is true that no U.S. administration has put any muscle behind its opposition to settlements since 1992, when James Baker, the secretary of state for President George H.W. Bush, threatened to withdraw loan guarantees if the Israelis went ahead with settlement plans. All the same, in no longer holding the settlements to be illegal, Mr. Pompeo put his finger on the scales. The widely shared conviction in the international community that the settlements are illegal has been one of the few remaining political assets the Palestinians still hold. Nearly all nations regard the West Bank as occupied territory, meaning that under international law, the occupier is forbidden from settling its own nationals there.

Until 1967, the territory was controlled by Jordan. Following the 1993 Oslo Accords, Jordan renounced its claims to the West Bank with the expectation that it would come under Palestinian jurisdiction. But Israeli apologists claim that the status of the West Bank has been unsettled since the 1948 Arab-Israeli War. Absent an Israeli-Palestinian peace agreement, Israel has taken possession of more and more of the land that had remained for a possible Palestinian state.

Absent an Israeli-Palestinian peace agreement, Israel has taken possession of more and more of the land that had remained for a possible Palestinian state.

In asserting that the settlements are not illegal, Mr. Pompeo further undermines prospects for a negotiated peace with the Palestinians and raises almost insuperable obstacles to Palestinians ever enjoying a homeland of their own. With the growth of Israeli settlements, the area available for a viable Palestinian state is disappearing. At best, the result will be a disconnected series of Palestinian homelands, similar to the racially segregated “Bantustans” in apartheid-era South Africa, within a greater Israeli state.

No possibility of a negotiated settlement will remain, as the Palestinians will have nothing left to negotiate. Since the Camp David Summit in 2000, there had been the vain thought that the Palestinians would receive land as compensation for the territories lost to Israeli settlements. In the absence of U.S. opposition to the settlements, any realistic hope of an equitable allocation of land has disappeared.

While the state of Palestine is recognized by 138 governments and its representatives sit in the councils of international organizations, it has little control over its own territory. The Israelis control not only access but also movement within the area of joint control (“Area B”) set up by the Oslo Accords, repeatedly impeding traffic moving between Palestinian towns and villages.

Israeli authorities control access to water, though the aquifers lie on Palestinian land, and they allocate it in discriminatory ways, watering lawns and filling swimming pools in Israeli settlements while rationing water supplies to Palestinian areas. In a punitive expression of domination, Israel also withholds import taxes due to the Palestinian Authority. These are only a few of the repressive measures that deprive Palestinians of a decent and dignified life in their own land.

Palestinians protest for the right to return, but to what?
Drew Christiansen

It is these deprivations and numerous others like them that make the strongest argument for Palestinian statehood. Israel and the Trump administration seem determined, however, to deny Palestinians that dream. Step by step, they condemn the Palestinian state to a still-born death in what political theorists call “policide.”

The Palestinian people seem doomed to an extended period of suffering and degradation. But before long, the number of Arabs west of the Jordan River will outnumber the number of Jewish Israelis. Israel will not long be able to securely rule a disenfranchised Palestinian majority. That is why some of its own military leaders have repeatedly warned Israeli governments to support more irenic policies.

At the same time, extension of Israeli control over the West Bank will inevitably corrode Israeli democracy. Thirty years ago, the New York Times columnist Thomas Friedman, in his book From Beirut to Jerusalem, declared that Israel, despite the aspiration of its founders, could not long remain both a Jewish and democratic state. Israel’s passage in 2018 of a “nation-state law” that says “the right to exercise national self-determination” is “unique to the Jewish people” again highlighted this contradiction. The Pompeo announcement could grease the skids for Israel’s path to ethnocracy, government by a single ethnic group. In the current world disorder, it will be harder than ever to reverse that course of events.

Drew Christiansen, S.J., the former editor in chief of America, is Distinguished Professor of Ethics and Human Development at Georgetown University and a senior fellow at the Berkley Center for Religion, Peace and World Affairs. He comments on international affairs for the international Jesuit journal Civiltà Cattolica.