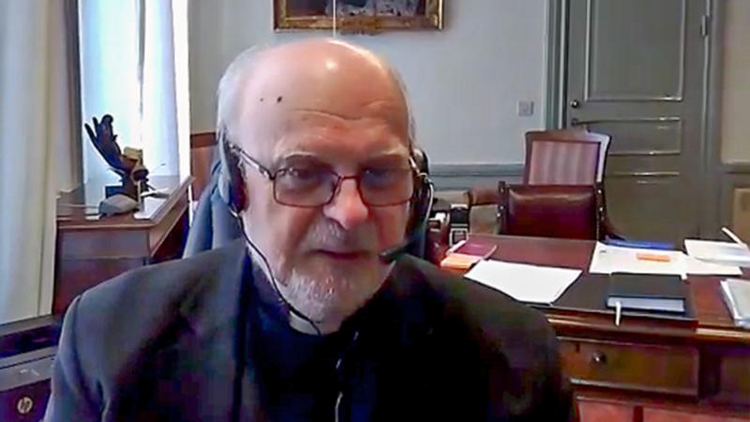 Swedish Cardinal Anders Arborelius of Stockholm speaks via Zoom video chat May 7, 2020. Cardinal Arborelius expressed concern over the Swedish government's relaxed approach to the COVID-19 pandemic and its effect on the most vulnerable, including the elderly and undocumented migrants. (CNS photo/Zoom)

ROME (CNS) -- Unlike most countries, Sweden has chosen a more relaxed approach to preventing the spread of the coronavirus, sparking a debate on how governments should confront the deadly pandemic.

Sweden's high death rate among elderly men and women living in retirement homes have many, including the nation's only cardinal, questioning whether measures meant to protect the most vulnerable have worked.

"Not being an expert, it's difficult to judge, but I would say that many people here in Sweden are very worried and, also, the authorities have recognized that we have not been able to give elderly people the protection they needed," Cardinal Anders Arborelius of Stockholm told Catholic News Service May 7.

Although Swedish authorities called for people to work remotely and restricted gatherings of more than 50 people at the start of the crisis, restaurants and bars, as well as schools for children under the age of 16, remained open.

Anders Tegnell, the country's chief epidemiologist, told CNBC May 7 that cases in Stockholm, the epicenter of the outbreak, have peaked and that the numbers of those in hospitals "is clearly falling."

As of May 8, an estimated 3,040 people have died of the coronavirus in Sweden. The death toll is the highest in the Nordic region. Denmark has had 514 deaths, while 255 people have died in Finland and 217 in Norway.

According to a study May 6 by John Hopkins University, the death rate in Sweden is currently at 28.88 for every 100,000 people. In the United States, which has the most number of cases worldwide, the death rate is 22.44.

Furthermore, statistics released May 6 from Sweden's National Health and Social Affair's office showed not only that 90% of COVID-19 victims were 70 years and older, but that half of those elderly victims were living in government-run retirement homes.

"If you come to Stockholm, you see more people in the street than in other parts of Europe," Cardinal Arborelius said. But because of the high mortality rate, "there is a discussion going on here in Sweden: Is this really a good thing to do?"

The Swedish cardinal told CNS that the approach taken by the Diocese of Stockholm has been "a bit more strict" and, unlike the government, the Catholic Church chose to close catechism classes for children and young adults.

Some churches began to open gradually after Easter while observing the government's regulation limiting gatherings of more than 50 people, but others continue to livestream Masses for the elderly and the sick, he said.

"We can say that we try to do what we can, but we also see (that) there are needs. Many of the undocumented immigrants are also Catholic and they have lost work, they have lost housing," Cardinal Arborelius told CNS.

In an open letter to Swedish Prime Minister Stefan Lofven, Cardinal Arborelius and other Christian leaders called on the government to protect migrants and the homeless who are most at risk of being infected or are suffering due to the economic fallout.

"Human rights must apply to all people living in our country without distinction. Churches and the majority of civil society does what it can. Churches, like the virus, make no distinction between citizens and noncitizens. Neither can the public -- state, municipalities and authorities. That's why we demand action now!" the letter said.

Cardinal Arborelius told CNS that he hoped the letter will "open the eyes of the government."

Sweden is "a very bureaucratic country and if you don't have any papers, you don't exist," he said. "That was our concern and now we hope that the government will react and try to do something for this vulnerable group of people."

Cardinal Arborelius said he hopes that the pandemic will spark "a spiritual awakening" in Sweden.

"We see some signs of that, too," he told CNS. People "who never had an interest in the church (now) look for Masses or religious services on the internet." He also noted that for the first time, the Swedish national television network broadcast the Easter vigil.

Pope Francis' words and actions throughout the crisis, he added, have also touched people in Sweden, especially his extraordinary blessing "urbi et orbi" (to the city and the world) in late March.

"That was really an image of his importance in weakness, in poverty. I think for many people here, they have an image that the Catholic Church is very powerful, very rich. And then they see this lonely man standing there, on behalf of all humanity, to ask for God's help," Cardinal Arborelius said.

"So, I think for many other Christians as well and even nonbelievers, the presence of the Holy Father has become more evident," he said.