Laudato Si’ at five: Dioceses embrace pope’s call for care of the earth 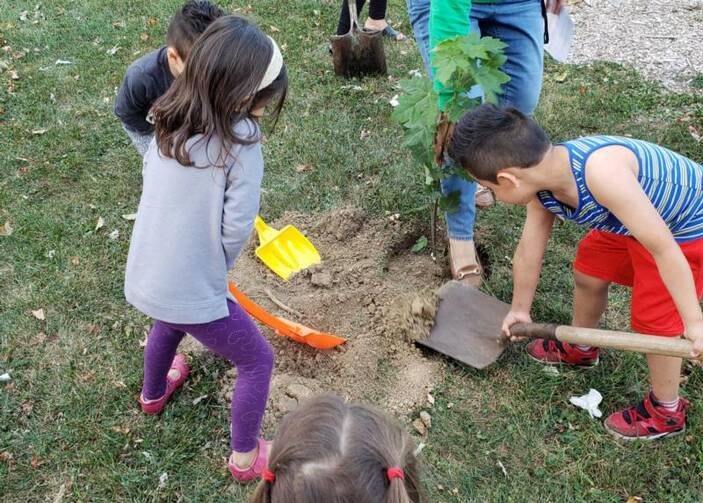 Children plant trees on the feast of St. Francis October 2019 in Indianapolis. Dioceses and other organizations around the world are planning to mark the fifth anniversary of Pope Francis' encyclical on care for creation with online events and prayers during Laudato Si' Week May 16-24, 2020. (CNS photo/Archdiocese of Indianapolis Creation Care Commission)

CLEVELAND (CNS) -- The Catholic Church in the Archdiocese of Indianapolis is "greening."

So are the dioceses of Stockton, California; Joliet, Illinois; and others across the United States.

Participants in diocesan environmental ministries credit Pope Francis' 2015 encyclical, "Laudato Si', on Care for Our Common Home," for raising awareness and motivating Catholics and others to act in countless ways to protect creation.

"The pope's encyclical lays out the scene very well and is something we can have an impact with," said John Mundell, an environmental consultant and a member of Our Lady of Lourdes Parish in Indianapolis, who is a leader in the archdiocese's creation care ministry.

"Besides the environment being part of our faith, there's a resurrection (in the encyclical) of some of the core values we should have. It is living the Gospel, living simply, loving your neighbor. It's all part of Catholic social teaching. That's the core," he told Catholic News Service as the encyclical's fifth anniversary neared.

A weeklong church-wide observance is planned to mark Pope Francis' signing of the encyclical May 24, 2015. Laudato Si' Week, set for May 16-24, will include a number of online workshops. The week, sponsored by the Vatican Dicastery for Integral Human Development, ends with a day of prayer May 24, a Sunday, at noon local time.

"It's a time for Catholics around the world to pray, reflect and prepare to build a better world together," said Anna Wagner, director of network engagement for the Global Catholic Climate Movement, which is working with RENOVA+, an Argentine Catholic organization promoting the encyclical, to facilitate the week with the dicastery.

A website -- laudatosiweek.org/ -- includes a video message from the pope and other resources for observing the week.

Diocesan environmental ministries have been key to bringing the encyclical's core messages to the faithful.

The Indianapolis Archdiocese already was forming a creation care commission as the encyclical was being finalized at the Vatican. Mundell said a core group of people, including attorney Rosemary Spalding, Benedictine Sister Sheila Fitzpatrick, and Andy Pike and Sharon Horvath, who led a creation care ministry at St. Thomas Aquinas Parish, were eager to move forward once the pope's landmark document was released.

Early work included quarterly articles in The Criterion, the archdiocesan newspaper, Lenten programs, educational sessions during the National Catholic Youth Conference and social media posts. But the commission wanted to do more.

"We couldn't just be satisfied with 'Let's just change a few light bulbs in the church,' but actually how are we going to undergo this ecological conversion the pope asks for in Laudato Si'," Mundell explained.

In 2018, the commission presented a more thorough action plan for the ministry to incoming Archbishop Charles C. Thompson. He embraced it, allowing commission members to move into new programming last year, Mundell said.

That effort focused on four parishes and one high school. It led educational workshops about Catholic social teaching and climate science, coordinated energy audits in collaboration with the local electricity utility company and guided self-assessments of water usage, waste, landscaping and transportation to see where improvements could be made.

The ministry also introduced a five-week Season of Creation program from Sept. 1 to Oct. 4. The program included a week-by-week guide with daily actions, reflections and background science information, weekly messages from Archbishop Thompson, the planting of 200 trees by 12 parishes, the launch of a new website at www.OurCommonHome.org, parish bulletin information and joining a community organization to show environment-themed films.

The work is "part of the kind of church we want to build," Mundell said as awareness grew of pragmatic and faith-based environmentally friendly practices that can be taken in parish and personal life.

The novel coronavirus pandemic, however, has slowed progress in raising awareness of the encyclical and expanding parish environmental action. Even so, Mundell remains optimistic.

"What we're getting now is people are getting this visceral understanding of what it means to live at home and live without things and change their lifestyle a bit," he said.

‘Laudato Si’’ calls us to ecological conversion. What does that look like?
William Critchley-Menor, S.J.

Despite the stay-at-home orders and social-distancing guidelines around the world, the pandemic has not halted plans to celebrate the encyclical's anniversary.

Laudato Si' Week is perhaps the highest-profile church-sponsored event. The week "launches a yearlong journey of transformation, as we grow through the crisis of the current moment by praying, reflecting and preparing together for a better world to come tomorrow," the dicastery said.

The May 24 day of prayer will allow Catholics around the globe to be united in spirit, said Wagner of the Global Catholic Climate Movement. "That's a really special opportunity to pray together for a more just future, to pray for our shared home and be united in a wave of prayer," she said.

"We hope this moment can be a time for reflection and remembering what's important, which is our humanity and our common home, and that we can be a part of creating a more just future and creating more care for our common home coming out of Laudato Si' Week."

Joining the effort is the U.S. Conference of Catholic Bishops and the Catholic Climate Covenant.

Dan Misleh, the covenant's executive director, told CNS the week offers people of faith a time to reflect on the gift of the earth "and realize it is under threat." The world's response to the pandemic also can show the way forward on addressing climate change, he said.

"It is also a global crisis," Misleh said of climate change. "The world is going to have to get its act together to address it. ... "The challenge for the church and other people of faith is to remember that these crises are not separate. We still have people who are, particularly in poor countries, looking for a better life. This virus made their lives a whole lot more tenuous. We have to be mindful of that."

The USCCB's environmental justice program has developed a variety of resources, including a prayer, for ongoing engagement with the encyclical. Materials are online at bit.ly/2RYBXU1.

Environmental ministry related to the pope's encyclical has taken many forms.

"We're pretty much bringing the Catholic perspective to these policies and bringing Catholic parishioners to the table," he explained. "We're understanding we can get involved in this sort of thing. We've been able to see that Catholics are able to speak in this case, that environmental justice is not a partisan issue. It involves transparency for all. It involves inclusion of everyone."

Pruitt and Veronica Tovar, program manager for the ministry, also have involved students at schools in advocacy. Tovar said emphasis has been on making connections between a simple practice such as recycling to setting policies that, for example, reduce the need to recycle in the first place through state laws and regulations that require wider availability of reusable containers.

Since October, Kayla Jacobs, director of programs for the Laudato Si' ministry in the Diocese of Joliet, Illinois, has expanded environmental ministry to more parishes. Previously she worked in the diocesan justice and peace ministry, but when funding became available specifically to address environmental concerns, she jumped at the opportunity.

Jacobs has visited parishes and schools to share the pope's encyclical. She has helped expand recycling programs and introduced energy audits so entities can understand where to conserve on energy consumption. Her goal is to build parish-based environment committees to carry on the work.

"The response has been one of excitement," Jacobs said. "People have been really excited about this."

Such outreach, with the encyclical as a building block, is what the church is called to in unsettling times, said Mundell in the Indianapolis Archdiocese.

"We're trying to show," he said, "that this work is not a separate thing from our faith."