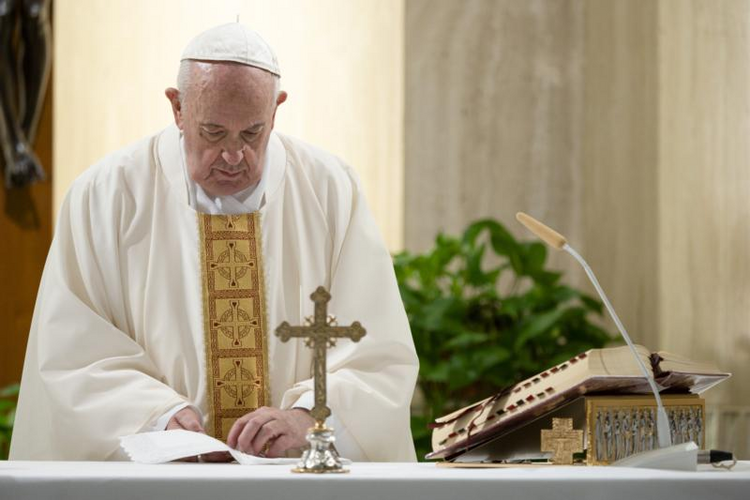 Pope Francis celebrates Mass on April 17, 2020, in the chapel of his Vatican residence, the Domus Sanctae Marthae. (CNS photo/Vatican Media)

VATICAN CITY (CNS) -- Pope Francis said he was praying for expectant mothers who may be anxious or worried about giving birth during the COVID-19 pandemic.

And he said the forced isolation devised to stop the pandemic was presenting the danger of people living the faith only for themselves -- detached from the sacraments, the church and the people of God.

Online Masses and spiritual communion do not represent the church, he said in his homily at his morning Mass in the chapel of his residence April 17.

"This is the church in a difficult situation that the Lord is allowing, but the ideal of the church is always with the people and with the sacraments -- always," Pope Francis said.

The pope began the Mass by praying for "women who are expecting, pregnant women who will become mothers and who are anxious; they worry," he said.

Perhaps they are asking themselves, "What kind of world will my child live in?" he said.

"Let us pray for them, that the Lord give them the courage to carry these children forth with the trust that it will certainly be a different world, but it will always be a world the Lord loves very much," he said.

In his homily, the pope reflected on serious concerns about the faithful not being able to come together as a community to celebrate Mass or to receive the sacraments because of government restrictions against people gathering in groups as part of efforts to stem the spread of the coronavirus.

Masses, prayers and faith-based initiatives have been offered online, and the faithful have been encouraged to make an act of spiritual Communion given their lack of access to holy Communion, but "this is not the church," the pope said.

One's relationship with Jesus "is intimate, it is personal, but it is in a community," and this closeness to Christ without community, without the Eucharist, without the people of God assembled together and "without the sacraments is dangerous," he said.

It is dangerous, he said, because people could start living their relationship with God "for just myself, detached from the people of God."

As the Gospels show, Jesus' disciples always lived their relationship with the Lord as a community -- they gathered "at the table, a sign of community. It was always with the sacrament, with bread," the pope said.

"I am saying this because someone made me reflect on the danger of this moment we are living, this pandemic that has made all of us communicate, even in a religious sense, through the media, through means of communication," he said.

By broadcasting his morning Mass, for example, people are in communion, but they are not "together," he said.

The very small number of people present at his daily morning Mass will receive the Eucharist, he said, but not the people watching online who will only have "spiritual Communion."

"This is not the church," Pope Francis said.

People are living this "familiarity with the Lord" apart from each other in order to "get out of the tunnel, not to stay in it."

The pope said it was thanks to an unnamed bishop who "scolded him" and made him think more deeply about the danger of celebrating Mass without the presence and participation of the general public.

He said the bishop wrote to him before Easter when it was announced Mass would be celebrated in an "empty" St. Peter's Basilica. He said the bishop questioned the decision and asked, when "St. Peter's is so big, why not put 30 people at least so people can be seen" in the congregation?

The pope said that at first he didn't understand what this bishop was trying to get at, but then they spoke and the bishop told him to be careful to not make the church, the sacraments and the people of God something that is only experienced or distributed online.

"The church, the sacraments and the people of God are concrete," the pope said.

The faithful's relationship with God must also stay concrete, as the apostles lived it, as a community and with the people of God, not lived in a selfish way as individuals or lived in a "viral" way that is spread only online.

"May the Lord teach us this intimacy with him, this familiarity with him, but in the church, with the sacraments, with the holy faithful people of God," he said.