The pope just proposed a ‘universal basic wage.’ What does that mean for the United States? 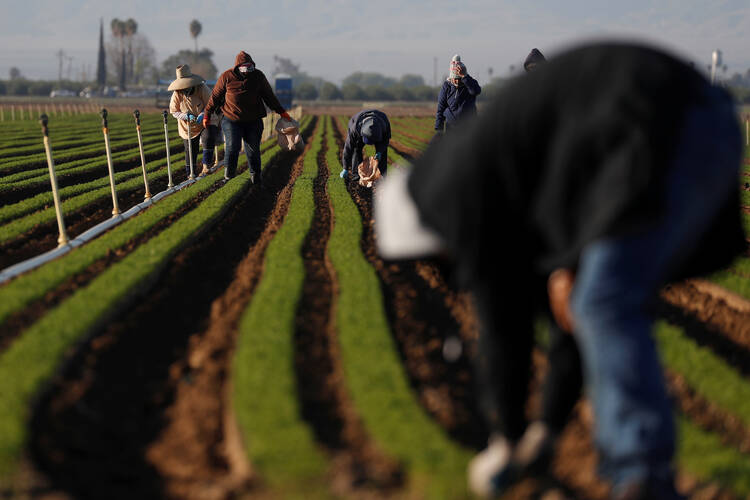 In his Easter address to popular movements of the world, Pope Francis encouraged activists to keep up their efforts and their hope under the pressure of a pandemic. He repeated familiar refrains about the “idolatry of money” and “ecological conversion.” But he also allowed himself to offer a single policy proposal that movements might work toward: “This may be the time,” he said, “to consider a universal basic wage.” This points unmistakably to what is usually known as universal basic income—a regular, substantial cash payment to people just for being alive.

*There is some disagreement about the pope’s precise meaning, but he does indicate that “this may be the time” for considering a new strategy for economic inclusion. He also mentioned “basic income” in passing last month during a meeting with finance ministers.

Back in 2015, I reported on how the idea was becoming fashionable in Silicon Valley, as well as among activists on the American right and left. Since then one luminary after another has voiced support and Andrew Yang had a surprisingly strong showing in the early days of the Democratic presidential campaign while focusing on basic income almost exclusively. (John W. Miller also wrote about U.B.I. for America.)

Why is the head of the Roman Catholic Church advocating a little-tested, still-radical economic policy like the universal basic income?

Now countries including the United States are normalizing government cash payments to individuals as part of Covid-19 relief efforts. Pope Francis’s statement builds on this rapid escalation from a fringe fantasy to global rallying cry. He also mentioned basic income in passing last month during a meeting with finance ministers.

Why is the head of the Roman Catholic Church advocating a little-tested, still-radical economic policy?

It would not be the first time. Modern Catholic social teaching began with Pope Leo XIII’s encyclical “Rerum Novarum” in 1891, which sought to address the widening economic inequality of that Gilded Age—one not so unlike ours. Leo sought a response to the conflicts between labor and capital that rejected the absolutist tendencies of each.

Leo affirmed both the right to private property and the rights of organized labor, but he also sought to transform both. The goal for governments, he advised, should be “to induce as many as possible of the people to become owners.” By drastically broadening access to capital, he wanted to reorient the relationship between capital and labor altogether.

This was not a detailed policy design but a call for experimentation, and it was heard. In Italy, Catholics worked in parallel with communists to create one of the world’s leading economies for cooperative, democratically owned businesses. Achievements from the Mondragon worker cooperatives in Basque country to the North American credit unions are direct descendants of Pope Leo’s call.

Today we still see evidence of this as Catholic entrepreneurs embrace employee ownership, and the Catholic Campaign for Human Development has backed a worker co-op now making protective masks for caregivers. Pope Leo did not invent cooperative business, by any means, but his encouragement created space for others to try it and succeed.

Pope Francis spoke to the need for universal access to work, alongside housing, land and food. But several times, he also emphasized the kinds of work that go unnoticed and unwaged.

By nudging social policymakers toward basic income, Pope Francis seems to be doing something similar. He is seeding the idea both among political elites and social movements, inviting both to explore it. As in “Rerum Novarum,” he is steering them toward a potentially transformative frame for economic thinking—one that is not zero-sum under current conditions but that alters the terrain altogether, as universal cash payments could do. This could also become a bridge among partisans; basic income has attracted interest from directions as otherwise divergent as Martin Luther King Jr. alongside Richard Nixon, the Cato Institute alongside the Roosevelt Institute.

Despite the enthusiasm for basic income in elite places like Silicon Valley, some of its most revealing test cases have been in what Pope Francis calls the “peripheries”—the parts of our world far from the centers of power, where prophetic voices frequently go unheard. Brazil’s Bolsa Família program has helped lift millions out of poverty with cash payments, for instance, and the Alaska Permanent Fund has cut annual checks to residents since the mid-1970s. Both programs are popular and have withstood the regimes of competing political parties.

What might be most perplexing about a pope embracing basic income is the Catholic Church’s longstanding emphasis on the importance and dignity of work. Paying people whether they work or not could seem like an affront to that ethic.

In the Easter message, Pope Francis spoke to the need for universal access to work, alongside housing, land and food. But several times, he also emphasized the kinds of work that go unnoticed and unwaged. This includes “the people, especially women, who multiply loaves of bread in soup kitchens,” as well as the work of movement activists such as those he was addressing.

Universal basic income is having a moment. Can advocates convince a skeptical public?
John W. Miller

He brought up basic income in the context of informal workers—“street vendors, recyclers, street performers, small farmers, construction workers, dressmakers, the different kinds of caregivers”—with the hope that basic income “would acknowledge and dignify the noble, essential tasks you carry out.” Real work, he thereby stressed, is not just what is acknowledged with a wage or what occurs in a registered business. These other kinds of work deserve recognition in the economy as well.

If we were to put Popes Francis and Leo in dialogue, we might also identify a caveat: Basic income should stand on the basis of co-ownership. Many cash-transfer programs do this, using a vehicle such as a sovereign wealth fund; thus it is clear that the money people receive is a dividend on what they co-own, not a handout that should be a source of shame or a sign of failure. A basic income based on ownership would also be less likely to fall victim to the ever-widening distance between the wealth of the capitalist class and the extent of public services everyone else can count on. To be meaningful, basic income must be made of solidarity, not crumbs.

For those of us in the United States, one might wonder whether this papal affirmation might affect the now-presumptive Democratic nominee for president, Joe Biden, a Roman Catholic. Mr. Biden has opposed basic income, fearing it would cause people to “sit home and do nothing” (although the evidence suggests otherwise). Could his pope change his mind?

*This article was updated on April 13 to make note of the debate surrounding the pope’s use of the term “salario universal.”