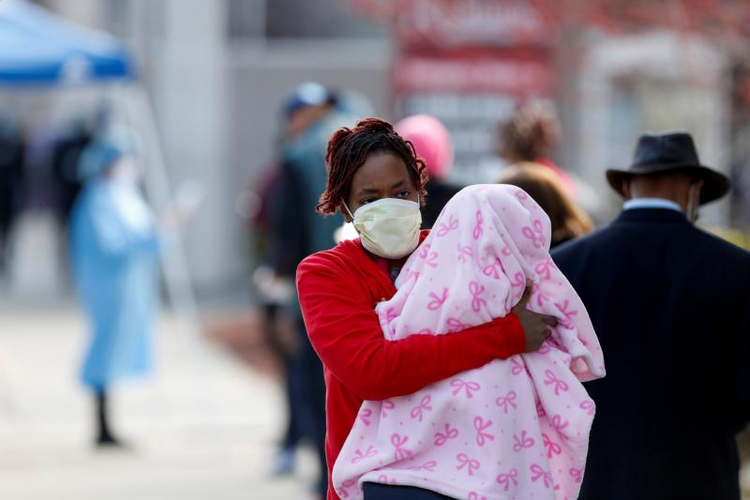 A woman in Chicago holds a child as she walks past people waiting in line to receive the coronavirus test April 7, 2020. (CNS photo/Joshua Lott, Reuters)

CLEVELAND (CNS) -- Testing and treatment for the novel coronavirus for all people regardless of their immigration status and assistance to church organizations with more than 500 workers are among crucial concerns Catholic leaders are urging Congress to address in a new federal emergency aid package in response to the COVID-19 pandemic.

Providing internet access to low-income families so children can fully participate in online classes and greater economic relief for hospitals faced with having to shift resources to treat COVID-19 patients also are high priorities.

Officials at some of the country's largest Catholic organizations have welcomed the assistance provided under the massive $2.2 trillion Coronavirus Aid, Relief and Economic Security Act, or CARES Act. At the same time, however, the officials called for additional emergency relief and key policy changes so that they can better respond to the burgeoning health crisis.

Preliminary discussions on a new emergency aid package are taking place in anticipation of Congress reconvening April 20. But members' return to Washington is not guaranteed because the pandemic may be reaching its peak in some communities about that time.

"As a charitable organization, we're facing much larger numbers, with staffs that are stretched thin, and with agencies that are going to be faced with furloughing or laying off staff because they don't have the resources," she said.

Catholic Charities USA is seeking expansion of federal financial assistance to operations with more than 500 employees -- those that cannot secure a Small Business Administration loan under the Paycheck Protection Program outlined in the CARES Act. Smaller entities, including schools, parishes and some dioceses, can obtain a loan under the act. Those loans can be forgiven -- in essence becoming a grant -- if 75% of the funds received are used to keep workers on staff for up to eight weeks.

"Those (Catholic Charities) people are in dire straits," Sister Markham told Catholic News Service. "We're trying to do our best to bring that to the attention of folks on the Hill."

Other efforts are focusing on the needs of vulnerable immigrants, who were largely excluded in the CARES Act and two earlier aid bills. Ashley Feasley, director of policy for Migration and Refugee Services of the U.S. Conference of Catholic Bishops, said she is urging members of Congress to correct the oversight.

The CARES Act included funding for testing and treatment, but not for people who are in the country without authorization, she said.

"First and foremost, we're seeking access to testing and COVID-19-related care for all, regardless of status. This is a moral issue. This isn't just a migration issue at this point. It's a public health issue," she said.

MRS and other agencies are bringing two other concerns to Congress:

-- The need for cash assistance for immigrant adults who do not have a Social Security number and have lost their jobs because of the spread of the virus but have children born in the United States.

-- Automatic extensions of permits for young adults in the United States under the Deferred Action for Childhood Arrivals program and religious, agricultural and other workers holding special visas as the processing of applications by the U.S. Customs and Immigrations Services has slowed.

Meanwhile, hospitals continue to bear a large part of the economic cost of the pandemic. Lisa Smith, vice president for advocacy and public policy at the Catholic Health Association of the United States, said hospitals of all sizes are in "dire financial straits."

She called for quick dispersal of the $180 billion allocated in the CARES Act for health care spending, including $100 billion for hospitals and care providers that are the hardest hit in responding to the coronavirus.

Smith also said more funding was necessary to keep hospitals from having to drastically cut services in order to respond primarily to COVID-19.

CHA and other health care organizations also are seeking the reopening of the federal health insurance exchange system authorized under the Affordable Care Act so that uninsured people can enroll for coverage. Twenty-three states that did not expand Medicaid under the ACA have depended on the federal exchange allow residents to access health insurance.

"The administration has refused to do that," Smith said.

"It is critical the people have insurance coverage so people are not hesitant to get the care that they need. Hospitals don't have the resources to be carrying all of this load," she said.

At the National Catholic Educational Association, Presentation Sister Dale McDonald, director of public policy and educational research, is seeking funding for families to allow them to connect to the internet as schools have converted to online learning. She said an estimated 8 million to 12 million students have no internet connection at home.

She said it would cost about $200 per family to implement the plan.

"There was some money in the CARES Act to provide students with Chromebooks (a kind of stripped-down laptop computer) and allow them to work. But they still need the connectivity. The real concern is kids falling behind," she told CNS.

Sister McDonald also expressed concern that the $350 billion Paycheck Protection Program is insufficient to meet the need of all small employers, including Catholic schools, parishes and other church entities. She suggested that funds secured through the loan program may be able to be used more readily for operations as well.

"For many of these schools operating on the margins, the future looks grim," Sister McDonald said. "There's just no money."

The USCCB Committee on Communications also supports expanding broadband access to households unable to afford internet service. James Rogers, chief communications officer at the bishops' conference, said ensuring that students "are not forgotten and left behind" is the committee's goal.

In addition, the committee also is considering offering support for a monthly benefit for families to allow them to connect to the internet. "This would be an attempt to be a bridge to normalcy," Rogers said.

Other policy matters being considered by the committee include:

-- A program to help religious publishers that have waived copyright and licensing fees for hymnals, songbooks and other worship aids that are being made available at no charge as people turned to the livestreaming of Masses and religious services.

-- Joining with newspaper publishing associations in a plan to boost revenues in the industry, which has seen advertising plummet in the weeks since stay-at-home orders were put in place. One measure would allocate funds to federal agencies to buy advertising in local newspapers -- including diocesan newspapers -- to promote public service messages that previously would have been provided at no charge.

"The committee would hate to see newspapers go away," Rogers said. "They are crucial. They provide lifesaving information today in a way like it never has been before."