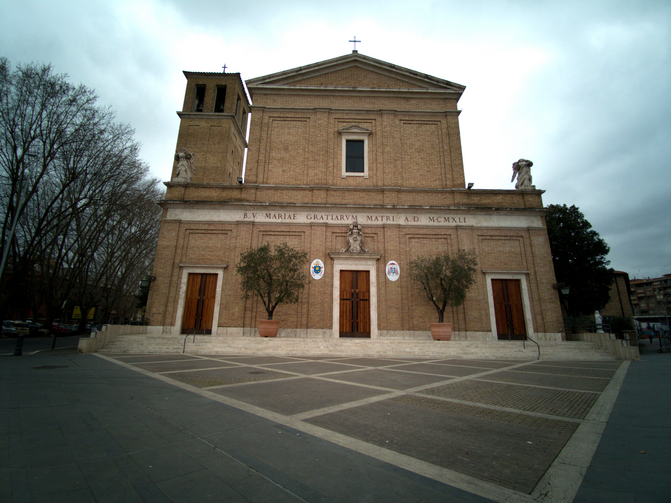 The Church of Santa Maria delle Grazie al Trionfale in Rome, titular church of Cardinal Joseph W. Tobin of Newark, N.J., is seen March 13, 2020. Cardinal Angelo De Donatis, papal vicar of Rome, announced March 12 that all churches would be closed to prevent the spread of the coronavirus. He modified the order the next day, allowing pastors to make the choice to open, but only if people maintain a safe distance from one another. (CNS photo/Junno Arocho Esteves)

ROME (CNS) -- In a nation where the faithful are not allowed to assemble for Mass, one church in northern Italy is full.

The Church of All Saints in Bergamo -- located in a cemetery in Italy's hardest-hit Lombardy region -- has had to open its doors to dozens of coffins containing the remains of people who died of COVID-19.

According to local reports, between March 11 and March 13, at least 40 coffins were inside the church each day, awaiting -- not a funeral because they are banned nationwide -- but cremation.

With an average of 20 deaths a day, the city's mortuaries were full. And even though the crematorium was operating 24 hours a day, there was still a five-day wait. The line at city hall was almost exclusively people waiting to register a death, local media reported.

With a population of a little more than 120,000, the province of Bergamo had gone from three or four deaths a day before the coronavirus hit, to 146 deaths in just five days March 7-11. Fifty-one people died on March 11.

The priest in the nearby village of Zogno said on Facebook he was only going to ring the death knell once a day because there were so many daily deaths, and he did not want to further depress an already dejected atmosphere.

As of early March, Bergamo was the Italian province with the highest number of deaths related to the coronavirus and one that saw some of the earliest cases.

Helping minister to those patients was Sister Anna Maria Marconi, a member of the Congregation of the Sisters of the Most Holy Child Mary, and a volunteer for the chaplaincy of a local hospital.

She told Vatican News March 12 that, in the beginning, before people realized the high risk of contagion, relatives had been allowed to be at the bedside of their dying loved ones.

Later, regulations kept relatives away "and this was a great disappointment, knowing that a person had to face such an important stage in life, that is, death, being welcomed by Jesus' embrace, but knowing you can't share even that one tear being shed" with loved ones, she said.

Sister Marconi was able to spend the first few weeks of the crisis in the hospital with patients, offering them comfort and solace as they lay dying.

"I would have before me these eyes, gazing at me, while their face struggled for what little air needed to live," she said.

Unable to speak, the patients were conveying "a look that made me understand I had to pray for them and yet, I am absolutely convinced of this, they experienced an encounter with the paternal love of a God who promised us he would never leave us, never."

Sister Marconi said she then found she needed to offer comfort to relatives of the deceased who were unable to find closure with the traditional and communal rite of a funeral.

The nun said one young woman in tears told her, "My father was taken away (to the hospital) and I never saw him again; neither my mother or I saw him again. We are both in quarantine and we will see when they bless his ashes in who knows how many days."

Sister Marconi told Vatican News she had to stop helping people because she was now in isolation. She lives "in a community of 100 sisters, 70 of whom are sick, so I couldn't expose the other sisters, all elderly, to this disease from this infection."

The risk for religious living in close quarters is high. The mother house of the Little Missionary Sisters of Charity in Tortona, 42 miles from Milan, was evacuated March 13, and 24 religious women living there were hospitalized for fever and trouble breathing -- the most common symptoms of COVID-19. The other 17 sisters and five staff had been quarantined.

Meanwhile, the Italian bishops' conference was using video conference calls and its website to connect with and offer information to the diocesan directors of pastoral care for health care workers and hospital chaplains across the country.

"There is a huge mobilization by the church all over Italy for this health emergency," Father Massimo Angelelli, director of the bishops' office for pastoral care, told SIR, the Italian Catholic news agency. They are constantly providing updated health care directives, research and pastoral support to those on the front lines, he said March 10.

Father Giovanni Musazzi is one of two chaplains at Milan's Sacco hospital, a specialized center for infectious diseases and the facility that hospitalized "Patient One," the first case in Italy that had no connection with the outbreak in Wuhan, China.

The priest, a member of the Fraternity of St. Charles Borromeo, told the online news outlet, Il Sussidario, March 13 that patients now represent every facet of society, from young to old "with one thing in common -- fear of what they are going through."

He said doctors have allowed him to minister to and offer Communion only to patients who are not hooked up to oxygen but are behind glass.

He said he has to wear a biohazard suit and must be accompanied by a doctor.

"But personally, I am also very worried about the medical staff," he said; they have been working "for 16 days straight, 12 hours a day, without stopping and without complaining."

"In fact, they, too, are victims of loneliness. Many of them have told me how important it is to know that I am there. At night, when they go home, we talk a long time on the phone. Many have had to send their children away out of fear of infecting them, and they haven't seen their own parents for weeks," he said. "They won't be able to see anyone for the next two months at least."

One bright spot he said, was how some families are able to use this time of forced isolation to grow closer together.

He said when he went for a run along the fields near the hospital a few days ago, he saw a few mothers and fathers playing with their children and riding bicycles.

"Those kids can't go to school, they can't visit their grandparents, they can't play with their friends, but what will they remember a few years from now? They will remember that their father and mother had time for them," he said.

These kids know there is an emergency underway, he said, but the parents are also showing them the value of appreciating the life they have, "which is not a bad thing."

Show Comments ()
Comments are automatically closed two weeks after an article's initial publication. See our comments policy for more.
Provide feedback on this article
Join the conversation: Login or create an account
Before you can comment, you need to update your profile to include your first and last name, as required in our comments policy. Then reload this page and you'll be set up for commenting. Update your profile
Advertisement
More: Coronavirus