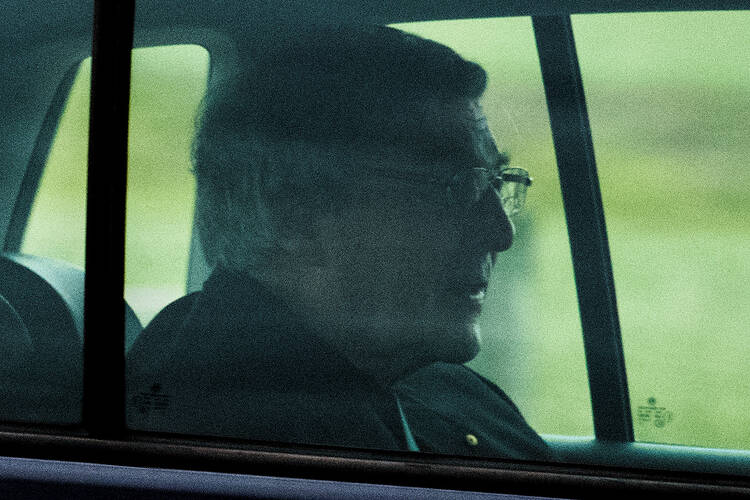 Cardinal George Pell is seen in a car after being released from Barwon prison in Geelong, Australia, April 7, 2020. (CNS photo/James Ross, AAP Image via Reuters)

The Vatican responded in a measured way to the decision by Australia’s High Court on April 7 to overturn the conviction of Cardinal George Pell on charges of sexually assaulting minors, enabling him to leave prison.

In a statement issued in English, Italian and Spanish shortly after midday in Rome, the Vatican press office said:

The Holy See, which has always expressed confidence in the Australian judicial authority, welcomes the High Court’s unanimous decision concerning Cardinal George Pell, acquitting him of the accusations of abuse of minors and overturning his sentence. Entrusting his case to the court’s justice, Cardinal Pell has always maintained his innocence and has waited for the truth to be ascertained. At the same time, the Holy See reaffirms its commitment to preventing and pursuing all cases of abuse against minors.

The statement closely mirrored earlier statements in March 2019, when the cardinal was condemned and sentenced to six years in prison, and in August 2019, when the Victoria Court of Appeal rejected his appeal against the conviction. It reaffirmed its confidence in the Australian justice system, welcomed “the unanimous” decision of the High Court to acquit the cardinal and overturn his conviction and, significantly, reaffirmed “its commitment to preventing and pursuing all cases of abuse against minors.”

The Vatican statement made no reference to the investigation into the allegations of abuse against Cardinal Pell, which the Congregation for the Doctrine of the Faith opened following the conviction and sentencing of the cardinal in March 2019. The Vatican said then that its investigation would not go ahead until the judicial process in Australia had ended. Some sources in Rome think the Vatican inquiry may be terminated given the fact that the cardinal has spent over 400 days in solitary confinement on charges for which he has now been acquitted by the High Court.

Earlier that morning, in his introduction to Mass in the chapel of Santa Marta, the Vatican guesthouse where he lives, Pope Francis spoke about those who suffer “unjust sentences” in a comment that was interpreted by many in the Vatican as alluding to what had happened to Cardinal Pell, though the pope never mentioned his name. (He used the Italian expression “una sentenza per l’accanimento,” which could be translated as “a decision that is unjust due to hostile prejudice”).

Francis said, “In these days of Lent we have seen the persecution that Jesus suffered and how the doctors of the law went relentlessly against him, and he was judged ferociously, even though he was innocent.” He concluded with these words: “I would like to pray today for all those persons that suffer an unjust sentence out of rage.” In a tweet published later, the last three words were translated as “because someone had it in for them.”

Cardinal George Pell, 78, was being held in Barwon prison in Geelong, a community 47 miles southwest of Melbourne, when he was informed by his lawyers of the High Court’s decision to overturn his conviction and acquit him. The seven judges, in a unanimous decision that overturned the cardinal’s convictions, commented, “There is a significant possibility that an innocent person has been convicted because the evidence did not establish guilt to the requisite standard of proof.”

Some two hours later, the cardinal was driven from the prison to a Carmelite convent in the Melbourne suburb of Kew, where, as could be seen in a video posted in various media, a religious sister welcomed him and led him inside. He is likely to stay at the convent for some time due to the travel restrictions imposed by Australian authorities because of the coronavirus pandemic.

Cardinal Pell issued a statement after his release in which he thanked everyone who had prayed for him and sent letters of support, as well as his family, his “team of advisers,” “friends and supporters here and overseas,” and especially his “legal team for their support.”

He said, “I have consistently maintained my innocence while suffering from a serious injustice,” adding, “This has been remedied today with the High Court’s unanimous decision.”

The cardinal added, “My trial was not a referendum on the Catholic Church; nor a referendum on how church authorities in Australia dealt with the crime of pedophilia in the church.” He emphasized that “the point was whether I had committed these awful crimes, and I did not.”

He ended his statement by expressing concern about the Covid-19 pandemic and said, “I am praying for all those affected and our medical frontline personnel.”

Lawyers for the accuser and for the father of the second choir boy who died in 2014 expressed their dismay. The former choirboy, known as Witness J, who accused Cardinal George Pell of sexual abuse told Australian media that he accepts the High Court's decision.

“I respect the decision of the High Court. I respect the outcome,” the witness said in a statement released by his lawyer. “I understand their view that there was not enough evidence to satisfy the court beyond all reasonable doubt that the offending occurred,” he said, adding that he understood why there was a heavy burden of proof in child sexual abuse matters.

Witness J: “The price we pay for weighting the system in favor of the accused is that many sexual offenses against children go unpunished.”

“But the price we pay for weighting the system in favor of the accused is that many sexual offenses against children go unpunished,” he said. “I would hate to think that one outcome of this case is that people are discouraged from reporting to the police.”

He told survivors of child sexual abuse “most people recognize the truth when they hear it,” adding, “I am content with that.”

As expected, there was a tsunami of contrasting reactions to the court’s decision in Australia.

The first one came in the form of a statement from Archbishop Mark Coleridge, the president of the Australian Catholic Bishops Conference, who said: “The High Court of Australia has today announced that it has quashed Cardinal George Pell’s convictions on historical sexual abuse charges. The court has ordered that he be released from prison.”

“Today’s outcome will be welcomed by many, including those who have believed in the cardinal’s innocence throughout this lengthy process,” Archbishop Coleridge said. But, he added, “we also recognize that the High Court’s decision will be devastating for others. Many have suffered greatly through the process, which has now reached its conclusion.”

Cardinal Pell is likely to face a number of civil claims in court over the coming year or more. It seems his troubles are far from over.

He sought to assure the people of Australia and the country’s authorities that “the result [of the High Court decision] today does not change the church’s unwavering commitment to child safety and to a just and compassionate response to survivors and victims of child sexual abuse.”

He emphasized that “the safety of children remains supremely important not only for the bishops, but for the entire Catholic community” and said, “any person with allegations of sexual abuse by church personnel should go to the police.”

Archbishop Peter Comensoli of Melbourne said his immediate reaction to the High Court decision was relief for Cardinal Pell and concern for the accuser. He said he had always believed the cardinal when he protested his innocence.

He added, “This decision means the cardinal was wrongly convicted and imprisoned, and he is now free to live his life peacefully within the community.”

Lisa Flynn of Shine Lawyers, acting for the father of the second choir boy, reported that her client “is currently in shock...he is furious” and “says he is heartbroken for [his son’s friend, the accuser in the case] who stuck his neck out by coming forward to tell his story but was ultimately let down by a legal process that forced him to relive his pain and trauma for no benefit.”

She added, “We will continue to pursue a civil claim on behalf of our client despite the High Court’s ruling today.”

Indeed, several sources report that the cardinal is likely to face a number of civil claims in court over the coming year or more. It seems his troubles are far from over.

The Royal Commission Inquiry into Institutional Child Sex Abuse has not yet published the part of its report that relates to Cardinal Pell. When it released the report in December 2017, it redacted sections referring to the cardinal to avoid prejudicing the judicial process that has just ended. It appears that the way is now open for its publication, and Australian sources say it is expected to be highly critical of the cardinal and his handling of child abuse cases.

After the judgment was delivered, Australia’s prime minister, Scott Morrison, said: “Just a mere discussion of these topics brings back great hurt and when these things arise my thoughts are always with [survivors of abuse]. But the...highest court in the land has made its decision and that must be respected.”

The Survivors' Network of those Abused by Priests said in a statement they were “dismayed and heartbroken” by the decision.

Sydney Archbishop Anthony Fisher called for the ruling to end the pursuit of Cardinal Pell in the courts.

“I am pleased that the cardinal will now be released and I ask that the pursuit of him that brought us to this point now cease,” Archbishop Fisher said in a statement.

“The cardinal’s vindication today invites broader reflection on our system of justice, our commitment to the presumption of innocence, and our treatment of high-profile figures accused of crimes,” he added.

The Victoria police, which conducted the investigation against the cardinal, said in a statement, “We respect the decision of the High Court in this matter and continue to provide support to those complainants involved.”

It added that the “Victoria Police remains committed to investigating sexual assault offences and providing justice for victims no matter how many years have passed.”

Many Australians had already accepted Cardinal Pell was guilty before the High Court decision. St. Patrick’s College, where Pell was educated in Ballarat, removed his name from a building and from the school honor board.

But the Australian Catholic University kept its Pell Center on its Ballarat campus until the appeal process was completed, angering academic staff. The university’s president, Greg Craven, said Cardinal Pell should never have been charged.

“This was a case that always had a reasonable doubt a mile wide,” Mr. Craven said. “The High Court unanimously—seven-nil—said the Victorian justice system got it hopelessly wrong.”