Forget me not: Prison ministry faces challenges of global pandemic

Forget me not: Prison ministry faces challenges of global pandemic 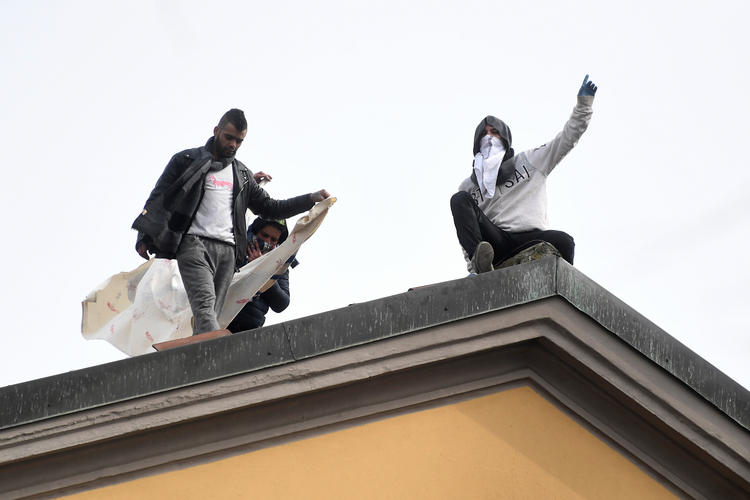 Inmates are seen on the roof of the San Vittore Prison in Milan March 9, 2020, during a revolt after family visits were suspended due to fears over the coronavirus. (CNS photo/Flavio Lo Scalzo, Reuters)

VATICAN CITY (CNS) -- As more countries continue to take precautions to prevent the spread of the coronavirus, the term "lockdown," normally used to describe confining prisoners to their cells, has taken on a whole new meaning.

Yet for Stefania Tallei, a prison ministry volunteer of the Community of Sant' Egidio, the current situation may help people understand the isolation and loneliness experienced by incarcerated men and women on a daily basis.

"There is a hope that we will become better people because, in these times, we all feel defenseless, we are all in difficulty and we have a taste of the difficulties that poor people, such as prisoners, experience," Tallei told Catholic News Service in late March.

Tallei coordinates a letter-writing program between prisoners and the elderly -- two groups that have been the focus of Pope Francis' prayers throughout the pandemic.

The pope has offered each of his livestreamed morning Masses for a specific intention, usually highlighting a group of people who are suffering due to the deadly viral outbreak. Recently, he prayed for prisoners and their families who are unable to visit because of the Italian government's strict social-distancing measures.

"Let us pray today for our brothers and sisters who are in prison," he said at the beginning of his morning Mass March 19. "They suffer so much because of the uncertainty of what will happen inside the prison and thinking about their families, wondering how they are, if someone is sick, if they lack something."

Shortly after Italy enacted a nationwide lockdown March 9, rioting took place in several prisons around the country in protest. Families of prisoners also demonstrated outside the prison facilities demanding to be allowed to see their loved ones.

Italian Father Vittorio Trani, chaplain at Rome's Regina Coeli prison, told CNS that while there was initial unrest inside and outside the prison, once they understood the severity of the pandemic, prisoners "realized that it was time to take the problem seriously."

"I saw that for them, the fact of not being in contact with the outside world was taken as a necessity for their own good," Father Trani said. "So, they are very calm, calm in the sense that there aren't any particular complaints. It's up to everybody to unite in this battle."

The Italian prison chaplain told CNS that the pope's closeness to the prisoners has always been "very beautiful" and particularly felt by the inmates who are now thrown further into isolation from their loved ones.

"I have been here for many years and the attitude those detained have with this pope is truly an attitude of extraordinary closeness because they feel he is very close to them in every sense," he said.

Tallei said that the prison letter-writing program is also a much-needed respite from the pressure prisoners face not only because of their sentence but also from the current protective measures.

The letters "are a great comfort because something from the outside comes in, some news, and they are happy," Tallei told CNS.

"It is something really important to them, especially now in this time of coronavirus," she said. "This morning, in fact, I was able to go (to the prison) and someone asked me, 'Did you send out that letter I wrote?' In short, it is important."

Yet despite the consolation of the letters, Tallei said, many prisoners are frightened by the pandemic, especially because "they have a big problem in that they are squished together, there is no space."

"I have to keep telling them to try to keep their distance from each other, but it isn't easy when there are six in one cell," she said.

Father Trani told CNS that the protective measures have proven quite a challenge for him. Instead of celebrating Mass in a large group, he visits each prison sector and shares "a moment of prayer with the possibility of receiving holy Communion."

"So, I read the Gospel of the day, a brief commentary, the 'Our Father,' (distribute) Communion and end with a prayer. And this is done in every sector for those who wish to participate in this moment of Sunday prayer," he said.

Although ministerial activities have been suspended, he added, there is no shortage of things to do to provide spiritual nourishment to the incarcerated.

"We have remained busy chaplains; just changing a bit how we work in collaboration with the personnel who work at the prison," Father Trani said. "I am present in this reality precisely for this reason: to be a presence that brings serenity in a time when there is so much fear."

Tallei said her visits to the prison have been severely limited due to the protocols. During her most recent visit, she was able to speak to a few prisoners "but only standing a meter and a half" away from them.

Nevertheless, it was important to set an example of following the procedures in place so that "they understand that we need to be distant. It isn't good if we pretend that nothing is going on."

Tallei told CNS she hopes that the difficult period of isolation and distance in Italy and throughout the world will bear fruit not only for those in prison, but those outside as well.